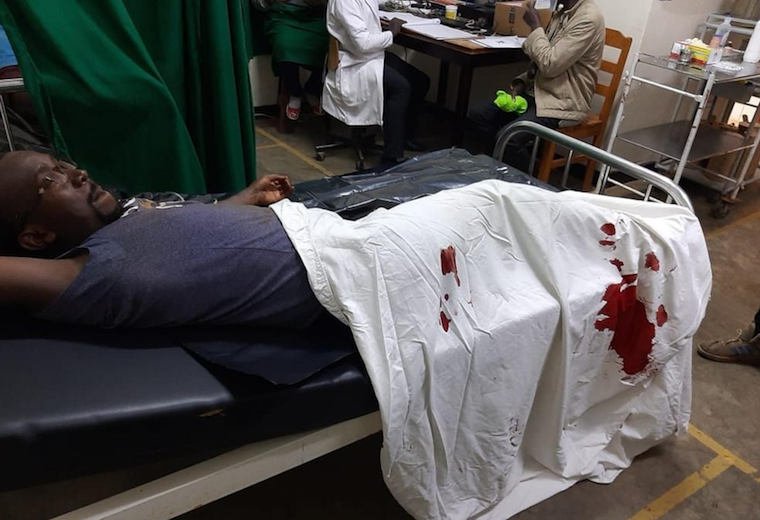 Peter Mwesige in the hospital

Police in Rwenzori West are investigating circumstances under which Peter Mwesige, coordinator of the Alliance for National Transformation (ANT) party in Fort Portal was shot in the leg in Kyenjojo district on Tuesday night.

Vincent Twesige, the Rwenzori West Region police spokesperson, says that the shooting followed a robbery incident in which four unknown robbers armed with two guns attacked businessman, Paul Kasaija and took off with Shs 1.5 million. This happened at around 8 pm on Tuesday night in Nyamabuga cell, Nyamabuga Ward in Rugombe town council in Kyenjojo district.

Twesige explains that when police were informed that the robbers were heading to Rugombe town council, they responded by mounting a checkpoint. He says that while at the checkpoint, a Bajaj Boxer motorcycle Reg. No. UFD 255F with three passengers carrying bags approached them but the rider refused to stop.

As a result, a patrol vehicle pursued them along Rugombe–Kyarusozi road thinking they were robbers. But they still failed to stop, forcing police officers to attempt to shoot the motorcycle tyres.

In the process, they shot Mwesige’s right leg while another unidentified passenger sustained injuries when they fell off the motorcycle.  Twesige says that even though the motorcycle rider disappeared immediately, police officers rushed the injured to a nearby clinic and later to Fort Portal regional referral hospital where they are receiving treatment.

Nyakato Rusoke, a relative to Mwesige and one who is taking care of him at the hospital, says police must account for their action, which she has termed as reckless. She says she has already reported the case at Fort Portal police station.