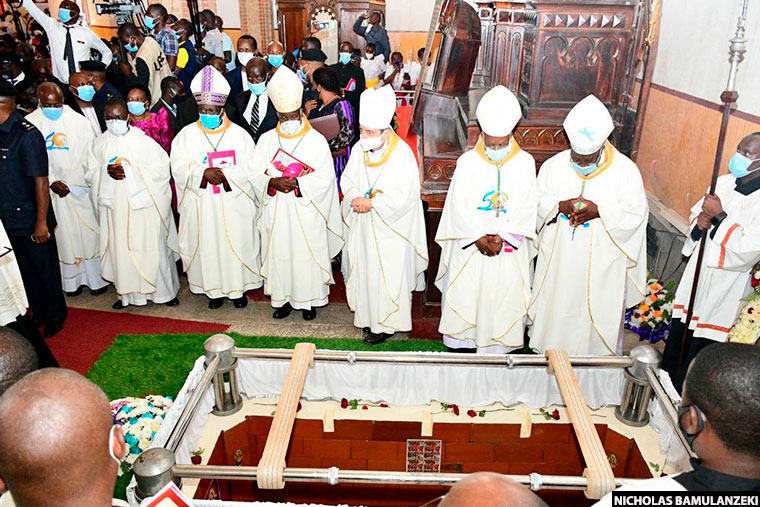 Archbishop Lwanga's body being lowered into the grave

The most sought after social media videos about the demise of Kampala Archbishop Dr Cyprian Kizito Lwanga were fake, according to an analysis by Uganda Radio Network.

In this video, Peng-Peng made a wild claim that there was foul play in the death of the prelate. Earlier on Monday, the interim archdiocesan administrator Msgr Charles Kasibante and the archdiocesan health coordinator Dr Andrew Ssekitoleko said that Lwanga succumbed to ischemic heart disease.

Reading a jointly signed document, Dr Ssekitoleko explained that the post-mortem was conducted by a team of senior pathologists in presence of two family representatives and two physicians delegated by the church, adding that at the end of the exercise, it was established that the archbishop had a heart attack due to a blood clot in the heart vessels.

But the post-mortem report did not put a stop to the spread of fake videos on YouTube. It’s only a clip by NTV with 12,495 views uploaded on April 3, 2021, titled “Archbishop Lwanga found dead in his home” that features in the top 10 most-watched videos about Lwanga’s death. The rest are fake commentaries. Lwanga was buried inside Rubaga Cathedral on Thursday.

Dr Gerald Walubya, a journalism lecturer at Makerere University, Juliet Nanfuka of Collaboration on International ICT Policy for East and Southern Africa (CIPESA) and Ibrahim Bbosa, the Uganda Communications Commission (UCC) spokesperson agree that fake news is a threat to purveyors of factual information such as traditional media but they disagree on how to counter it.

Walubya says traditional media should be concerned about fake news because once someone attempts to do their job using distorted content, they attract suspecting public that cannot differentiate fake news and objective news sources. 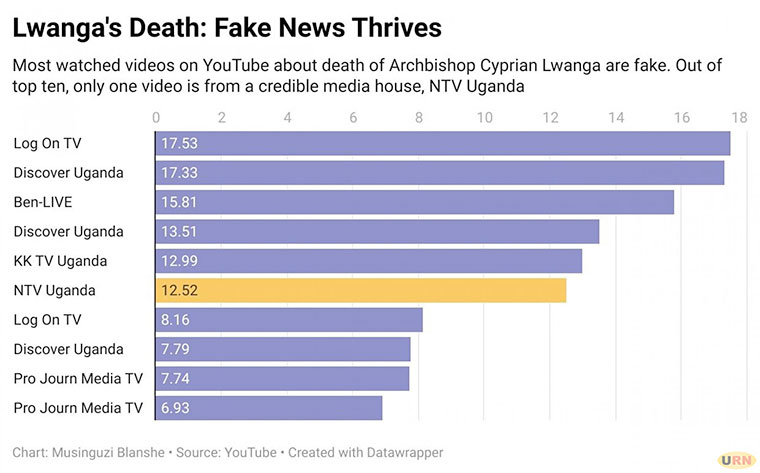 Log on TV describes itself as an outlet whose “impartial, fact-based reporting wins worldwide praise and respect.”  It also boasts as a “unique brand of journalism that the world has come to rely on.”

Walubya says it’s normal that fake news attracts a lot of attention because it's alarmist by nature and focuses on emotive issues.

"Should traditional media be concerned? Yes because once you have someone who does something that looks like yours and is doing it in a bad way, he or she is likely to tarnish your own brand because some of the members of the audience cannot decipher between a genuine platform and a fake platform. So, because these platforms and channels operate in the name of the media, it poses a challenge of tarnishing the image of the media generally to people who are not able to distinguish between legitimate channels and channels that are fake." said Walubya.

“Misinformation often thrives with the delay of factual checking and verification of that traditional media has to do. That lag creates an opportunity for misinformation,” she says.

Amid the campaign season, the government through UCC in December 2020 wrote to tech giant Google, asking the company to close 14 YouTube channels that were broadcasting live content of Robert Kyagulanyi aka Bobi Wine on the campaign trail.

In urging Google to shut down the accounts, UCC argued that these channels were broadcasting “extremist or anarchic messages, including messages likely to incite violence against sections of the public on account of their tribe and political opinions [and] may compromise national security.” But Google rebuffed government demand.

Bbosa says the “engagement with Google is still ongoing.” He says they are looking for a more streamlined approach in getting the content taken down. Bbosa says the government has an established relationship with Facebook which they are trying to build with Google.

Like any other country, Bbosa says the government is looking for ways of fighting fake news without stifling people’s freedoms. But UCC itself is largely never viewed as impartial by many commentators. Nanfuka says the regulator has a history of being viewed as selective” and attempting to “limit freedom of expression.”

Walubya says governments that have a monopoly over everything and have found it hard to accept that a tech company based in a foreign capital can decide who post what on a social media channel.

Given that African governments rarely act in good faith when it comes to regulation, Walubya argues that no one would want to be placed under their control.

"Better be controlled by Google than the government of Uganda," he says.

Yes , Peng Peng may be a nasty space bug ; what about the ones we have here everyday ?

What an irony that Obsever contents itself with reporting a distant problem when its own home is slowly but surely being taken over and contaminated by Fake News operators !
Report to administrator
0 #2 Wilbra 2021-04-13 00:17
Cognitive bias is when one interpretes what they believe in to be the truth-even if it may not be; and that's the problem with those who did their study above.

The question is what is the truth and what is fake? If you believe sources who plant military grade weapons on suspects-that later disappear, along with the charges; who claim that people run into cars in fatal road traffic accidents and not vice versa, those who report metallic products as eaten by mice; if you use their information as the yardstick then you might be the fake source, or a gullible conduit.
Report to administrator