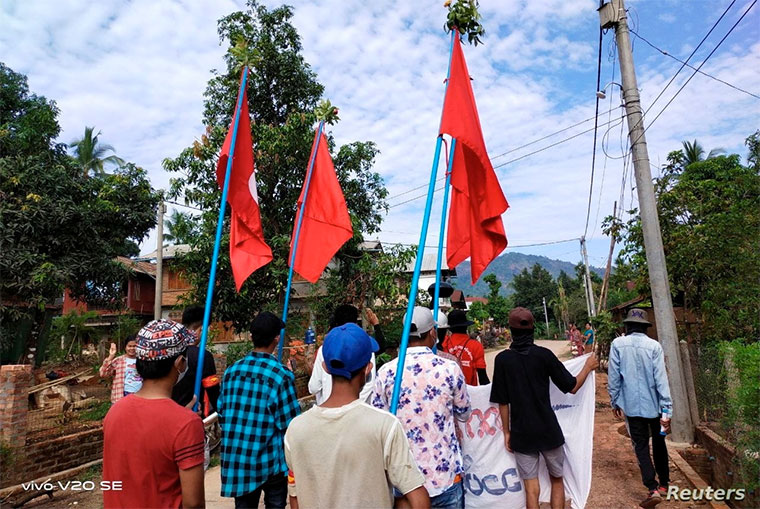 Demonstrators carry flags as they protest the military coup in a village in Launglon township, Myanmar, April 9, 2021. (Courtesy of Dawei Watch/via Reuters)

Nineteen people have been sentenced to death in Myanmar for killing an associate of an army captain, the military-owned Myawaddy TV station said Friday. These are the first such sentences announced in public since a February 1 coup and crackdown on protesters.

The report said the killing took place on March 27 in the North Okkalapa district of Yangon, Myanmar's biggest city. Martial law has been declared in the district, allowing courts-martial to pronounce sentences.

The military rulers who overthrew an elected government said on Friday that a protest campaign against its rule was dwindling because people wanted peace, and that it would hold elections within two years, the first timeframe it has given for a return to democracy.

Troops fired rifle grenades at anti-coup protesters on Friday in the town of Bago, near Yangon, witnesses and news reports said. At least 10 people were killed, and their bodies were piled inside a pagoda, they said.

Myanmar Now news and Mawkun, an online news magazine, said at least 20 people were killed and many wounded. It was not possible to get a precise toll because troops had cordoned off the area near the pagoda, they said.

Junta spokesman Brigadier General Zaw Min Tun told a news conference in the capital, Naypyitaw, that the country was returning to normal and government ministries and banks would resume full operations soon.

More than 600 people have been killed by security forces cracking down on protests against the coup, according to an activist group. The country has ground to a standstill because of the protests and widespread strikes against military rule.

"The reason of reducing protests is due to cooperation of people who want peace, which we value," Zaw Min Tun said. "We request people to cooperate with security forces and help them."

He said the military had recorded 248 deaths, and he denied that automatic weapons had been used. Sixteen policemen had also been killed, he said. The Assistance Association for Political Prisoners activist group has said that 614 people, including 48 children, had been killed by security forces since the coup, as of Thursday evening. More than 2,800 were in detention, it said.

"We are humbled by their courage and dignity," a group of 18 ambassadors in Myanmar said of the protesters in a joint statement.

"We stand together to support the hopes and aspirations of all those who believe in a free, just, peaceful and democratic Myanmar. Violence has to stop, all political detainees must be released and democracy must be restored."

The statement was signed by the ambassadors of the United States, Britain, the EU, Canada, Australia, New Zealand, South Korea, Switzerland and several other European nations.

He also accused members of deposed leader Aung San Suu Kyi's National League for Democracy of arson and said the protest campaign was being financed by foreign money, but he gave no details. Suu Kyi and many of her party colleagues have been in custody since the coup.

Zaw Min Tun said reports that some members of the international community did not recognize the military government were "fake news."

"We are cooperating with foreign countries and working together with neighbouring countries," the spokesman said.

"Our people are ready to pay any cost to get back their rights and freedom," said Zin Mar Aung, who has been appointed acting foreign minister for a group of ousted lawmakers. She urged council members to apply both direct and indirect pressure on the junta.

"Myanmar stands at the brink of state failure, of state collapse," Richard Horsey, a senior adviser on Myanmar with the International Crisis Group, told the informal U.N. meeting, the first public discussion of Myanmar by council members.

The U.N. special envoy for Myanmar, Christine Schraner Burgener, had wanted to visit the country but said she has been rebuffed by the generals.

She said on Friday she had arrived in Bangkok, the capital of neighboring Thailand.

"I regret that Tatmadaw answered me yesterday that they are not ready to receive me," Schraner Burgener said on Twitter, referring to the Myanmar military. "I am ready for dialog. Violence never leads to peaceful sustainable solutions."

Arrest criminals and terrorists, interrogate them and if we find they were misled,we release them.

This is Lakwena what I gather from reading Observer every day

Even the worst one like leader Mikula of ADF we do not shoot it hang.We very soft and kind with our people We teach them to be good obeying and obiding citizens and to learn what mistakes they made and let them go there ways Do I have to give you more examples,

General Seuza, Tinyefiza for example You want another rock.How about KK ? He is a free man.That is good .
.
Report to administrator
0 #2 Akot 2021-04-11 18:56
Mynmar people have risen up, have called for UNITY & USA, Europe, UK already imposed sanctions on the military junta!

The people of Mynmar MUST stay firm & UNITED!

Ugandans would get rid of migrant Museveni so easily as it's them tribally divided & ruled by the demon!

Which tribal land will Museveni fight back from this time & with which tribes behind him?

Why do Ugandans kill, terrorise their own for Museveni?

Ugandans MUST become humans with real brains & hearts towards one another; bring down the tribalistic system & this comes FIRST, then UNITY, to block Museveni!

Why are Ugandans helping Museveni own their land officially, legally, constitutionally, knowing USA, EU, UK... will watch in silence as long as the tribalistic system stands?

Why keep Museveni on & help him own Uganda?
Report to administrator