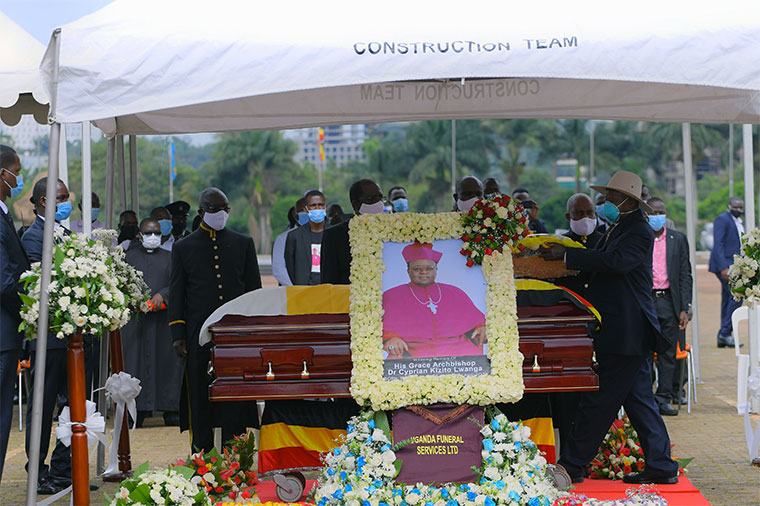 President Yoweri Museveni has said doctors the personal doctors of the late Archbishop of Kampala Cyprian Kizito Lwanga must explain why they failed to manage his heart condition which eventually led to his death.

Reading a jointly signed document, Dr Ssekitoleko explained that the post-mortem was conducted by a team of senior pathologists in presence of two family representatives and two physicians delegated by the church adding that at the end of the exercise, it was established that the archbishop had a heart attack due to a blood clot in the heart vessels.

However speaking at Kololo Independence Grounds today, Museveni said that it is difficult to understand how Lwanga could die of a condition that was well-known for long by his doctors. Museveni said he consulted his personal doctor, Diana Atwine who told him Lwanga's condition could have been managed better.

"Because really, although you’re saying God has called us and all that, really I want our people of value to stay here as long as possible. So his doctors, apparently, they were managing him for a long time, they should explain at some stage that condition because I asked my young doctor, Atwine that condition, how do you detect it? There is what they call the ECG [electrocardiogram machine] where the machines detect the electrical activities of the heart. But apparently, it may not see well the other one where the fats along the vessels. That there is another test called eco-something something that that is the one that can do that. Then I said if that is the case why would you not do it at some stage. So these doctors need to clarify," Museveni said.

Museveni hailed Lwanga and other clergy for the support they rendered during his liberation war that brought his government to power in 1986. Museveni says Cardinal Emmanuel Wamala and Lwanga were sympathisers to his NRA rebels who allowed his rebels to access food from their plantations.

Museveni also said the state will from now on give official burial ceremonies to all religious leaders at the level of archbishop irrespective of who they are, especially when they are from the mainstream or traditional religious institutions. He said archbishops belong in the same category as political and traditional doctors.

Museveni also hailed Lwanga for being a development minded person. He cited the Twekembe Microfinance in Luweero, which is one of the largest and successful microfinance organizations in Uganda. He hailed this as a move in the right direction by the religious leaders who previously taught to rely on God’s mercy for survival, instead of teaching them to multiply the little that they have.

"When he became bishop of Kasana-Luweero, one of the things I came to appreciate called Twekembe which he started with his salary and it is now a big microfinance involving many people. I was really very happy with that because that was part of the problem with my Christians in the 1960s. Some of them I think had read the bible wrongly," Lwanga said.

Bishop Joshua Lwere, a member of the Inter-Religious Council of Uganda, who represented the chairman, Sheikh Ramathan Mubajje, said they will miss Dr Lwanga for his bold fight for justice and his advocacy for dialogue, among others. The chairman of the Episcopal Conference Joseph Anthony Zziwa welcomed the decision by the president to accord the fallen cleric an official burial.

Lwanga was later honoured with a 17 gun salute. He will be buried on Thursday inside Lubaga Cathedral.

I recall it was in 2018 during Easter prayers at Rubaga cathedral, Lwanga expressed concern about state spies within the church.

He cited a case of the priest who recently died under unclear circumstances and later the security personnel went to his residence claiming for a gun that the priest had reportedly been using to do their work.
Report to administrator
+1 #2 WADADA rogers 2021-04-06 20:16
Whereas Lwanga was asking a seemingly innocent question, his fears were confirmed by Security minister Gen Elly Tumwiine during a new vision interview when he said the state spies on all those doing “wrong things” and that if Lwanga is not doing anything sinister, he has no reason to worry.

Ofcourse to establish if you are doing anything wrong, the whole process begins with planting spies on the men of God
Report to administrator
-3 #3 WADADA rogers 2021-04-06 20:22
Lwanga has gone with a few stains including his suggestion that tithe should be paid direct from people's salaries.

I thought this was a sign of greed or the part of the Church that is aware that the Government is already charging a whooping 30% as per as you earn and now the church also wants 10% from the same salary.
Report to administrator
0 #4 WADADA rogers 2021-04-06 20:33
Tithe as mis- interpreted from the books of Genesis 13:18-20 and Malachi 3:10 was only mandatory when the state was fused with the Church, the Church had been allowed to collect the money for onward delivery to the state and would earn a commission from it.

It is this commission that became a problem when the church split from the state. Sadly, the Church mantained the 10% and the state also continued collecting the money hence double taxation.

Whereas the Church calls it a tithe, the state calls it pay as you earn. This is where i faulty Lwanga yet he should have know the truth. IN Uganda when the Church takes 10% and the state 30% in payee, the employee is left with only 60% from which they have to pay other obligations such as NSSF and, provident fund, etc not to mention loans.

An average employee in effect is left with only 35% from which to pay school fees, rent, water, power, transport etc. It a had life.
Report to administrator
+3 #5 Kasede 2021-04-06 20:47
A country that is happy to have outdated Cobalt X-ray machines cannot be expected to possibly even think of more advanced / modern ways of diagnosing diseases in internally housed organs
Report to administrator
+3 #6 Apollo 2021-04-06 21:02
Gen. Museveni may be more concerned about his standing with the World's most enduring and powerful institution of the last 2000 years.

He is going to be thoroughly investigated and examined over the next few months. If he is exonerated, he will survive.

If he is found culpable, he will face the wrath of an institution that has destroyed everyone that dared challenge it.
Report to administrator
0 #7 kambarage 2021-04-07 13:20
Quoting WADADA rogers:

There is no better explanation, it all in black and white and Ugandans know this for fact.

I recall it was in 2018 during Easter prayers at Rubaga cathedral, Lwanga expressed concern about state spies within the church.

He cited a case of the priest who recently died under unclear circumstances and later the security personnel went to his residence claiming for a gun that the priest had reportedly been using to do their work.

Spies are not assigned to kill but to inform whoever sent them, of what the target is doing, saying and planning.

They are not assigned to kill. Anyways, from an unbiased layman's position, it is also obvious that the Archbishop died of a heart related illness. It's called kibwatukira in Luganda.
Report to administrator
0 #8 Wainanchi 2021-04-07 22:39
The same idiots always make negative comments on Y and NRM government.

We are sick and tired of reading their bullshit.They are chronical diahirrea.!Pgs and suvkrts.
Report to administrator