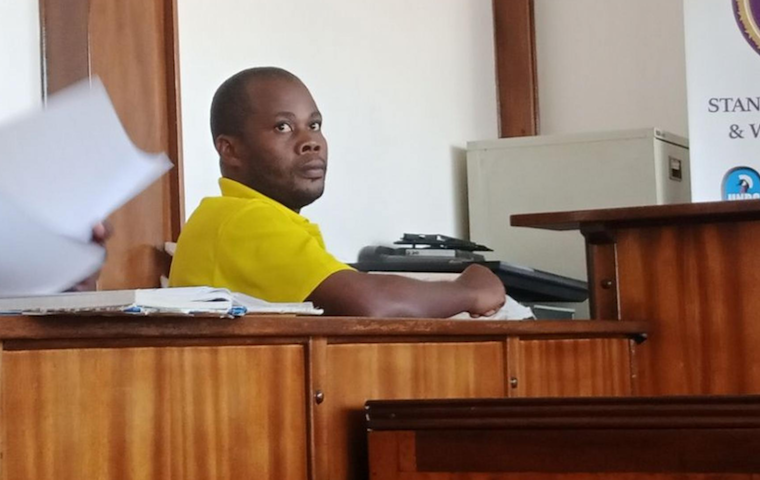 Ismail Kivumbi in the dock

A gardener has been remanded to Kitalya prison by Buganda Road court for alleged theft of Shs 30 million meant to buy food for State House, Nakasero employees.

Ismail Kivumbi, 37, was today Wednesday arraigned before Grade One magistrate Marion Mangeni who read to him the charges. Court heard that on February 25, 2021, at Nakasero in Kampala district, Kivumbi stole Shs 30 million, a property of the government of Uganda.

Kivumbi however denied the charge and asked to be released on bail on grounds that he has been in custody for close to two weeks without being produced in court.

But his two sureties had come to court without identification documents and local council letters which are the key requirements for one to be considered as a substantial surety. As such, the magistrate remanded Kivumbi to Kitalya government prison until April 6.

The state attorney Ivan Kyazze informed court that investigations into this matter were still ongoing. Kivumbi was arrested on Sunday last week according to sources at the State House Anti Corruption Unit whose operatives effected the arrest.

The sources revealed that Kivumbi who joined State House many years ago as a gardener was later elevated to the catering department of the State House Nakasero branch.

As such, they would give him Shs 30 million to buy food for State House employees at Nakasero and Okello House, food which was meant to last the entire week.

However, Kivumbi in the week of February 25, allegedly went to various food suppliers and instead of paying cash, he asked to be given food on credit such that the government can pay later after all, he was always buying from them with cash. Failing to pay, the source said that the suppliers allegedly started going to the State House to demand for their money.

As such, the detectives attached to State House Anti Corruption Unit arrested Kivumbi as he reportedly tried to flee the country from Entebbe International airport on Sunday last week.

How many monstrous staffers are there in our Nakasero State House, to gobble up food worth a Whopping Shs.30 million per week?

In the whole, wide, world (WWW) who doles out Shs.30 million cash per week, to a gardener to purchase food (katunkuma, dodo, nakati and katungulu chumi, etc.) for a country's State House like ours?

In other words, what a Shauriyako State House we have, where every Tom, Dick, Harry and Jane handle hundreds of millions of cash everyda/week/month and year.

No wonder, the gardener looks like a CEO of an NGO or one of the CSO whose Bank A/cs have been clamped by our "Problem of Africa", Gen Tibuhaburwa.
Report to administrator
+1 #4 rubangakene 2021-03-25 18:01
Here we go again; you see, gardeners in big estates are inherently very sly people. I wonder what other "tricks" he has been up to, apart from the odd pilfering of 'obutungullo and ebinyaanya', we shall never know!
Report to administrator