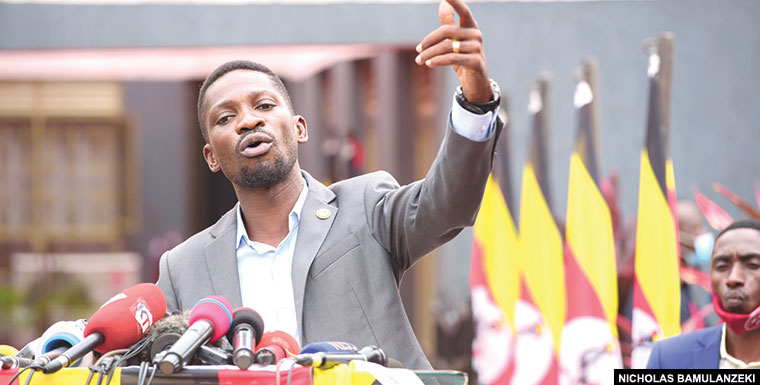 The Supreme court has okayed the withdrawal of the election petition filed by former presidential candidate Robert Kyagulanyi seeking to overturn the reelection victory of President Yoweri Kaguta Museveni.

The decision by a panel of nine Supreme court justices led by chief justice Alfonse Owiny-Dollo follows a concession from all parties to have the matter withdrawn.

In their brief ruling read by lady justice Stella Arach Amoko, court noted that upon careful consideration of the application, the authorities attached to it and arguments from both parties and after reading the law, the leave to withdraw the petition has been granted.

Arach added that the question of costs which have been a key issue of contention in today's hearing is going to be determined in their judgement which will be on notice. Earlier on, Kyagulanyi's lawyers led by Medard Lubega Sseggona asked court to allow the withdrawal of the petition without costs.

Court heard that in the interest of promoting rule of law, democracy, for the development of the country and to make people feel comfortable to raise grievances before court, each party should bear its own costs.

Sseggona added that Museveni was already declared the winner of the elections by the Electoral Commission, the second respondent in this case, and to them, there is nothing else he still wants from the petitioner, this being a public interest matter.

Sseggona further told court that his client's decision to withdraw the case was not influenced by corruption motives - which was confirmed by the respondents Museveni, Electoral Commission and the Attorney General during their oral response to the application for withdrawal.

However, the respondents asked court to condemn Kyagulanyi to costs basing on his behavior including uttering out falsehoods, attacking judicial officers, discussing issues before court through the media; and threatening to take his petition to the public court which they referred to as a mockery to the independence of the judiciary among others.

Attorney General William Byaruhanga specifically asked court to impose some sanctions for the parties who bring matters in the court but go on discussing them in the public and the press before they are determined to their logical conclusions.

Byaruhanga said this was illegal and should be condemned by all means. Chief justice Owiny-Dollo said much as Kyagulanyi had said he's taking the matter to the public court which implies that it is more superior to the Supreme court, the judiciary which he heads is never influenced by praises or abuses it receives from the public.

Kyagulanyi ran to court on February 1, 2021, accusing the Electoral Commission of fraudulently declaring Museveni as the winner of the January 14th elections with 58 per cent of the total votes cast.

Kyagulanyi who according to the commission scored 35 per cent of the total votes cast, accused Museveni of bribery, intimidation, ballot stuffing and sponsoring violence which resulted into arrests and death of people during the election process.

On his part, the Attorney General was accused of failing to put in place the recommendations arising from the previous presidential election petitions aimed at improving the electoral processes in the country. As such, Kyagulanyi asked court to nullify Museveni's victory and order for fresh elections.

But after losing two applications one seeking to amend his petition and another seeking for more time to adduce more evidence in the case, Kyagulanyi became frustrated and decided to withdraw the petition altogether. He also cited bias of the Supreme court justices.

Speaking to journalists after the hearing, Sseggona has said that they are taking their grievances to the public court unless he is given fresh instructions to the contrary.

Museveni's lawyer Kiryowa Kiwanuka has said the public court involves Ugandans who overwhelmingly voted Yoweri Museveni in the elections and therefore it is a wastage of time.

-2 #1 Akot 2021-03-05 19:47
[The Supreme court has okayed the withdrawal of the election petition filed by former presidential candidate Robert Kyagulanyi seeking to overturn the reelection victory of President Yoweri Kaguta Museveni.]

So, supreme court is happy dictator, conqueror Museveni is safe & will conclude 40 years legally, officially, constitutuonally, in the Uganda that belongs to Museveni & family!

When will Museveni dissolve posts of tribal leaders & Reform the Republic of Uganda?

When will Museveni be a real man with balls?

Museveni & tribal leaders need one another to ensure their posts while unconcerned about how subjects live!

It's "the people" who bring change & Ugandans have surrendered to be slaves while protecting their heartless tribal leaders!

Sometimes, one has to going back to the drawing board. Not a sign of weakness.

Sometimes, one has to going back to the drawing board. Not a sign of weakness.

Just suggest what should come next at this juncture. I am all ears.

Further, the Attorney " ... the respondents asked court to condemn Kyagulanyi to costs basing on his behavior including uttering out falsehoods, attacking judicial officers ... " BUT did they try him of this suggested BLASPHEMY against the Supreme Court?

I believe in "not guilty until otherwise tried and found to be guilty." Therefore, I see no basis in law to pronounce him guilty and charge him costs without a proper trial process. Any lawyer out there?
Report to administrator
+1 #5 kabayekka 2021-03-06 19:21
Well then after spending so much money from the public purse and running a national rigged election, what gain is there for the suffering tax-payer?

Is it alright for some people here in this country to continue to keep safely their jobs and lifestyle while the voters and tax payers continue to go bankrupt.

The late Gadhafi, leader of Libya, warned this UPDF military government not to put up dodgy national democratic elections.

How many times are the so called oppositions leaders of the people of Uganda going to learn to avoid falling into such innuendos! It seems that the modern citizens of this country are yet to see and understand what African democracy is all about + the African liberation movement adventures!
Report to administrator
+1 #6 kabayekka 2021-03-06 20:01
The American government has continuously asked for the recounting of the votes in Uganda as they themselves did when the former President of their country complained of rigging national elections.

What is wrong with the people's court to demand a recount of these votes even if it takes a week or two to do so?

By the way, where are these VIP votes kept right now? In the military barracks or Mr Byamukama's house and office as court exhibits?
Report to administrator
+2 #7 juwait kali 2021-03-06 20:35
Poor owinyi Odollo has to what would have been a big day he has only nrms leaning Mabirizi to answer to.