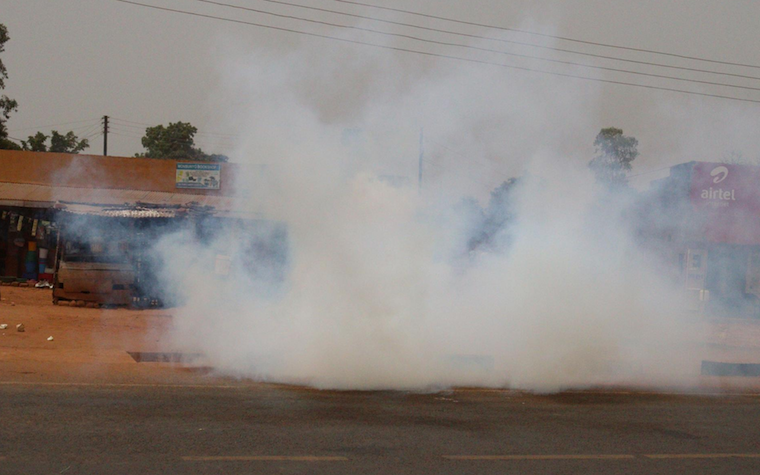 Police on Saturday fired teargas to disrupt a procession by opposition Forum for Democratic Change (FDC) supporters in Kitgum municipality.

Oboi and Besigye arrived in the municipality to grace thanksgiving prayers for the Kitgum Municipality MP-elect Denis Onekalit Amere at Kitgum public playgrounds.

As locals gathered at Mon Bunyu market in Pandwong Division to accompany Besigye, Oboi, and Amere for the two and half kilometre procession, anti-riot police moved in started firing teargas.

The officer in charge of Kitgum Central police station Martin Abigaba earlier told the FDC members in the procession that it would attract large followings thereby compromising the COVID-19 guidelines. And after failing to reach a compromise with the FDC leadership, police officers fired teargas at the crowds.

The thanks-giving prayer was to be presided by Rev Fr. John Mark Oryem, the parish priest of Padibe in Lamwo district. Amere defeated the incumbent Kitgum Municipality legislator and state minister for Environment Beatrice Anywar in the recent January 14 parliamentary polls. He polled 3,263 votes, while Anywar garnered 3,052 votes.

What is the dictator still afraid of? I thought that was the tool to deter voters from assembling to listen to the oppositions.

The dictator is forever afraid! No wonder he is always sleeping in public, he probably doesn't sleep at home, and always node on and off through out the day when his slave soldiers are watching out
Quote | Report to administrator
+6 #2 Lysol 2021-02-22 05:41
Over a month ago, I attended a thanksgiving prayers with over 2 thousands people in attendance, including the regime's militias. Nothing bad happened.
Quote | Report to administrator
Refresh comments list
RSS feed for comments to this post
Add comment