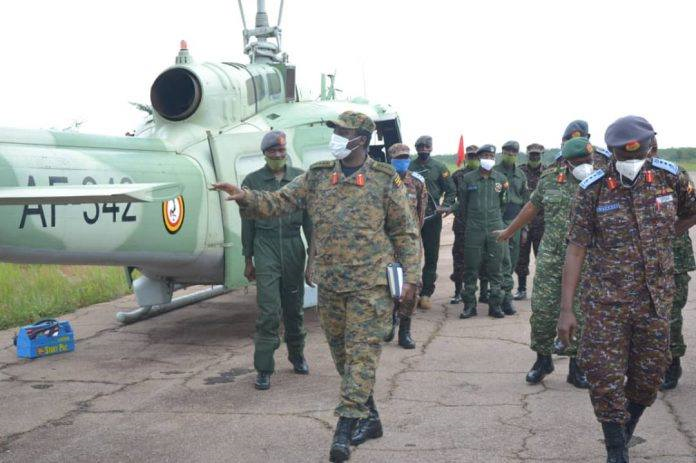 UPDF officers some of the deployed helicopters last year

The African Union Mission in Somalia (Amisom) has launched investigations into circumstances under which its helicopter crashed on Friday in southern Somalia injuring four Uganda People's Defense Forces (UPDF) soldiers.

In a statement released Sunday evening, Amisom said the helicopter, whose registration details were not disclosed, belonged to the AU mission's Aviation Unit from the UPDF. The statement, however, said all the four soldiers aboard the helicopter were in stable condition following the incidence.

"All four soldiers aboard the helicopter were rescued and are in a stable medical condition," the statement reads. The statement further says investigations into the crash are ongoing to determine the cause of the crash. However, preliminary reports indicate that it was due to a mechanical failure.

The four soldiers rescued where on a mission to support its troops in Lower Shabelle region crashed soon after take-off in Balidogle on February 5.

The UPDF deputy spokesperson Deo Akiiki confirmed the incident but could not divulge more details about the injured and the degree of injuries. The UPDF deployed choppers in Somalia in July last year to help in the fight against Alshabab militants.

Both media houses were quick to report the claimed killings but they have not had the decency to report the fact that it was fake news. Where false news has been disseminated by the media, they have both a professional and moral responsibility to their readers to set the record straight.

The government told a big lie and they need to be held to account. Not doing so amounts to being co-conspirators. I wouldn’t be surprised if this chopper was shot down by Al Shabab and dozens instead of 4 soldiers were killed.
Report to administrator
+1 #2 Lysol 2021-02-08 20:28
Perpetual war aka endless war is mostly for political and financial gains by those who fight it.

There is always no decisive victory by either side.
Report to administrator
0 #3 Ismail 2021-02-09 22:20
Concur with bwana Mukasa . The headline -Uganda UPDF kill 189 mgaidi (terrorists) using assault helicopters in Somalia came as a surprise . Ug Government has yet to provide any battle caption of the battle as evidence to the world to support their claim.

Ugandans remember the tragic story of these ill equipped Mi-24 helicopters flying under VFR in bad weather, crashing in Mt Kenya in 2012, and the Kenyan army rescuing some of the survivors. And we are now told one crashed with minor injuries to the crew.

Let’s take the government’s word and leave it at that as there are far more important pressing issues at home, of human violations by state troops on civilians that the government needs to account for.
Report to administrator