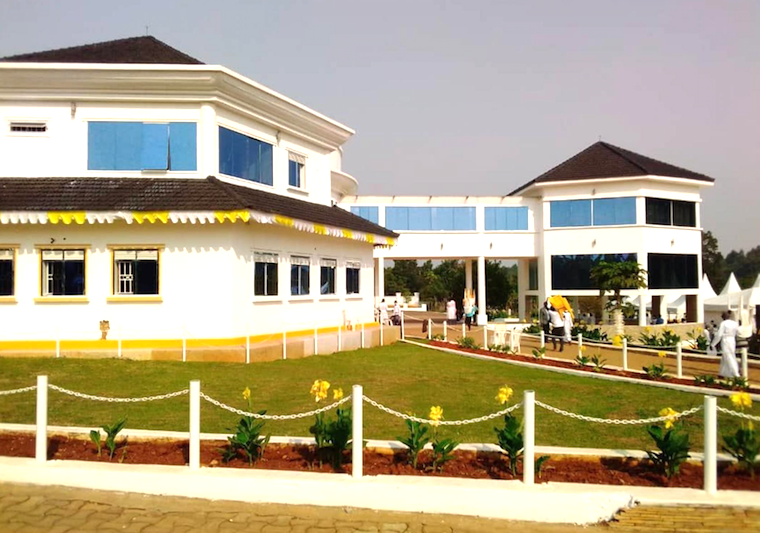 The house where Bisaka's preserved body was placed for viewing

The body of the late Desteo Owobusobozi Bisaka, 90, the founder and 'god' of Faith of Unity has been embalmed and kept for future viewing by his followers.

The body has been kept in Bisaka’s house in Kapyeemi cell in Muhorro town council in Kagadi district. Embalming is the art and science of preserving human remains by treating them to forestall decomposition. This is done to ensure that the deceased is suitable for public or private viewing or preserved for medical purposes.

Bisaka who left the Catholic Church in the 1980s to found the Faith of Unity succumbed to coronavirus (Covid-19) at Aga Khan hospital in Kenya’s capital Nairobi on January 13, 2021, but his family only announced the death on January 23. His body was returned to Uganda last week and airlifted by a military chopper to his ancestral home in Kagadi on Sunday last week.

Hundreds of people descended on Kapyeemi village to pay their last respects to the deceased before his body was placed at its final resting place. Omukwenda Turyamureeba, the head of communications at Faith of Unity and some government officials declined to comment on the decision to embalm Bisaka’s body.

"My friend we are not allowed to comment on this, it was an order from above. You want us to be in problems. That is how the burial is being conducted don't ask me for the body because it is the way we are conducting the burial,” said a top government official who attended the funeral on Sunday.

However, a source within the Faith of Unity told URN on condition of anonymity that prior to his death, Bisaka directed that his body be preserved for future viewing by his followers. Only selected mourners were allowed to view the deceased’s body. Even at the funeral, the body was not brought out for public viewing.

For the past week, Bisaka’s followers from different areas have been flocking the healing centre and were the only ones allowed to view the body in the deceased’s house. The source adds that the body was preserved to ensure that the deceased’s followers continue to accord him respect and abide by the rules and regulations of their faith even after the demise of their spiritual father.

No communication has been made about Bisaka’s heir. Even before his death, Bisaka had no deputy who would perform his healing work. It is unclear whether his faith will survive now that Bisaka is dead. In his condolence message read to mourners by the Finance minister Matia Kasaija, President Yoweri Museveni hailed the Bisaka for uniting and promoting peace among the people of Bunyoro and entire East Africa.

Museveni noted that Bisaka has been at the forefront of promoting peace among people regardless of their tribes, religion and political affiliations.

“On behalf of my family, government and the National Resistance Movement, I extend my heartfelt condolences and sympathy to the family, friends and followers of Owobusobozi Bisaka,” said Museveni.

He explained that Bisaka’s death has robbed Faith of Unity believers and the nation a great religious leader who used his unique spiritual gift to heal and cure people. Museveni urged the Faith of Unity followers to remain calm and stand firm in their faith, saying that the late Bisaka utilized his platform as a religious leader to promote good morals and discipline among his followers.

He said that Bisaka didn’t only fulfil God's call of service but also ensured that his believers nurtured spiritually and empowered physically and economically.

David Karubanga, the Public Service state minister described the late Bisaka as a man who encouraged togetherness and peaceful co-existence among the different tribes in Bunyoro sub-region. Omuhereza Alinda Akugizibwe, a member of the Faith of Unity who read a statement on behalf of Bisaka’s family, urged the followers to be strong and calm, saying they will not abandon their faith and convert to other faiths.

He applauded the government for offering the late Bisaka a conducive environment to perform his duties uninterrupted. Lilian Ruteraho, the Kagadi resident district commissioner (RDC), says the late Bisaka was able to champion and sensitize his followers about development in their homes.

Bisaka has followers in Kagadi, Kibaale, Mubende, Hoima, Kakumiro, Kyankwanzi, Kyenjonjo and Kiboga districts. He also has followers in DR Congo, South Sudan, Rwanda, Tanzania and Kenya among others who have been visiting him in search of blessings and healing.

The 'God' who preached against conventional medical care was airlifted to Nairobi for treatment but his faith could not save him. Now that he's gone, I hope the cult collapses.
Quote | Report to administrator
-2 #4 WADADA rogers 2021-02-01 17:05
Before the white man came to Africa with his god and forced him/her on us, the Bisakas of this world came in handly, they were the real and authentic gods, they would take in peoples prayers ans answer them, they would command the rains or the sun, they would improve crop yields and give wealth.

Let him be stored for his people to continue praying to him and a tourist attraction for Uganda, unto us us a god is dead
Quote | Report to administrator
+2 #5 Byamukama Patrick 2021-02-02 08:03
Africans!!!
why did we believe so fast that a white man called JESUS was sent from above?

And we fail to believe that our own black man BISAKA.
Quote | Report to administrator
0 #6 susan Byona 2021-02-02 13:09
For your information Byamukama, JESUS is not just a white man. He is the savior of this world.

He is the way the truth and the life that will lead you to heaven.

Be informed that you will one day meet him whether you like it or not the day you will leave this world. Trust me on this one you have no option.

Better give him your life and get born again before its too late.

Always remember no matter what you have said and think about him, he loves you and he died for you at the cross.