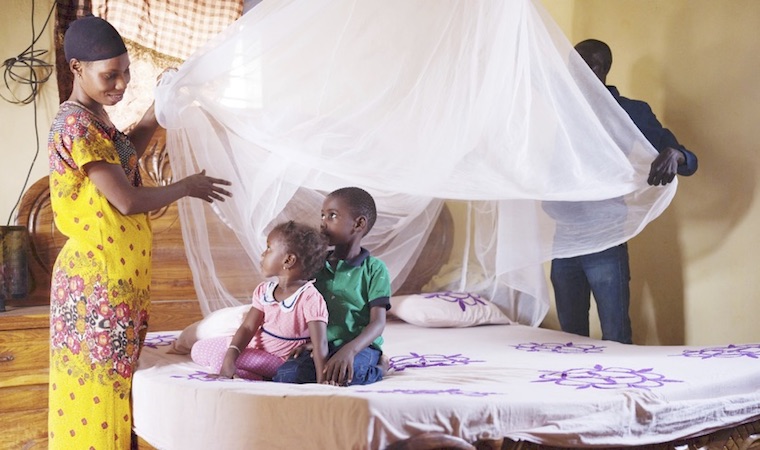 The ministry of Health has for the first time dis-tributed long-lasting bed nets with a new chemical in its national mass distribution campaign aimed at universal coverage against malaria. This follows evidence from a study, which showed that they were effective, writes ESTHER NAKKAZI.

The bed nets are infused with a new chemical combination piperonyl butoxide (PBO) which, according to research, is more effective against insecticide resistance and could cut malaria cases by about 25 per cent. The World Health Organisation
(WHO) endorsed PBO to augment existing treated bed nets in areas where insecticide resistance is common.

Researchers found that despite the widespread use of long-lasting insecticidal nets in sub-Saharan Africa, their impact on malaria control is lower than expected because mosquitoes are increasingly becoming resistant to insecticides called pyrethroids used to treat the bed nets.

“In this campaign, for the first time we have deployed three different types of bed nets in the national mass distribution campaign and one of them has PBO,” said Medard Rukaari, the officer in charge of Universal bed net distribution at the Uganda National Malaria Control Programme.

“We are mapping to try and understand what works where.”

Uganda’s national campaign which started in July 2020 and ends in February 2021, is distributing conventional long-lasting insecticidal nets (LLINs), bed nets impregnated with PBO, and third-generation LLINs that combine two chemicals and employ a different mode of action than pyrethroids to kill mosquitoes.

A total of 28 million nets will be distributed in this third nationwide campaign. Uganda is one of the high-burden high-impact countries. The country had also been one of the 11 countries to launch a global campaign to reduce cases and deaths by malaria by at least 40 per cent by 2020.

The changes come in the wake of a study launched in February 2017 and ended April 2020 that found that households supplied with the PBO-treated bed nets had 80 percent fewer malaria-carrying mosquitoes compared to households using conventional long-lasting insecticidal nets (LLINs).

In the study done in Uganda, it was found that the number testing posi-tive for malaria parasites in a 12-month period after PBO LLIN nets were distributed was 27% lower than for children sleeping under nets treated with BPO than those solely with pyrethroid insecticides.

Moses Kamya, the executive direc-tor of the Infectious Disease Research Collaboration, who participated in this research, in a press statement said that there is still an advantage to using any type of LLIN because when you sleep under either type of net, you are less likely to contract malaria.

Martin Donnelly, an expert in the genetics of insecticide resistance at the Liverpool School of Tropical Medicine and co-leader in the trial, said PBO long-lasting insecticidal nets were more effective than conventional LLINs in Uganda, where resistance to pyrethroid insecticides is high.

Kamya said during the release of preliminary findings that the greater reduction in malaria from the PBO-treated nets is significant and switching to this type of bed nets in national malaria control campaigns should be considered.

The study was because researchers were ‘concerned about the potential impacts of insecticide resistance on malaria control in Uganda and whether they could find a better alternative to the long-lasting insecticide-treated nets that were presently in use, said Donnelly.

During the study when BPO nets were distributed massively a drastic malaria reduction was achieved within 6 months of its distribution and 9 per cent from 19 per cent malaria prevalence was registered.

“This was out of a combination of interventions but the major contributor was mosquito nets,” said Rukaari.

Sarah Staedke, an epidemiologist with the London School of Hygiene and Tropical Medicine and the Infectious Diseases Research Collaboration, said they think nets with this new formulation would do a better job of preventing malaria than standard nets, particularly in areas of high-level insecticide resistance, and could reduce the burden of malaria.

However, according to Donnelly, the conventional bed nets still have a role to play as they provide protection and may still have a role in vector control programs in settings where insecticide resistance and malaria transmission are lower.

Donnelly cautioned that while the in-creased efficacy offered by PBO-treated nets is great, it’s likely just a matter of time before mosquitoes evolve to evade the compound. He noted that PBO does not shut down all the enzymes mosquitoes employ to overcome pyre-throids. “PBO nets could be a very good stopgap for several years.”