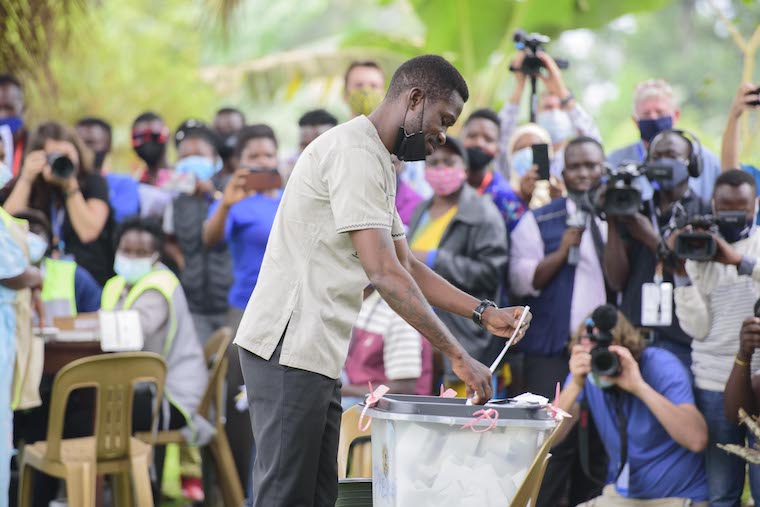 Bobi Wine casting his ballot last week. He has been under house arrest for a week now

National Unity Platform (NUP) presidential candidate Robert Kyagulanyi's home is under siege because he undertook to make Uganda ungovernable like Libya, Iraq and Sudan, the attorney general has today told the High court in Kampala.

While appearing before the outgoing head of Civil Division of High court justice Michael Elubu, the state attorney Martin Mwangusha defended government's actions of deploying at Kyagulanyi's home and denying him his right to free movement.

Three days ago, the government, Chief of Defense Forces and Inspector General of Police were sued by Kyagulanyi’s lawyers who demanded his unconditional release.

Lawyers led by Anthony Wameli said that since last week on Thursday, the polling day of presidential and parliamentary elections, Kyagulanyi and his wife Barbie Itungu have not been allowed to get outside of their home which infringes on their right to liberty.

Kyagulanyi came second in the race of eleven presidential candidates after being defeated by President Yoweri Museveni according to the Electoral Commission.

Mwangusha who was relying on the affidavit of the police director operations, Edward Ochom and Brig. Dr Godard Busingye the chief of legal services of the Uganda People's Defense Forces (UPDF) asked court to dismiss the case.

In the affidavit, Ochom first narrated the chronology of the alleged past bad conduct of Kyagulanyi during his presidential campaigns up to when the police decided to hold him his home for the safety of other people's property and lives.

Ochom states that Kyagulanyi was stopped from holding rallies that have more than 400 people but because of him being defiant, he went ahead and held rallies that would sometimes attract up to 2,000 people as reported by several district police commanders (DPCs) across the country.

Ochom adds that after Kyagulanyi had been nominated for the concluded presidential elections, he said he would make Uganda ungovernable like Libya, Iraq and Sudan where citizens toppled their presidents through street protests.

The police director of operations states further that Kyagulanyi’s NUP has been training its members and supporters on how to hold and sustain riots in the event that he loses the presidential election.

"I know that Dr Lina Zedriga the vice chairperson NUP for northern Uganda announced and declared that the party had a plan B being sustaining of riots and plan C being insurrection and riots to capture State House”, reads the affidavit in part.

To Ochom, since Kyagulanyi’s past experience had been characterized by events that led to unnecessary loss of lives and destruction of property, security had to restrict his movements with the aim of neutralizing security threats that have been detected by the security organs.

Further evidence submitted by government also claims that Kyagulanyi’s lawyers Mathias Mpuuga and Anthony Wameli asked for permission to meet him but Kyagulanyi reportedly declined, saying he wanted to meet his entire legal team which therefore means that his lawyers have not been blocked as he alleges, according to government.

Ochom wants the case dismissed because he says it is misconceived. On his part, Brig Busingye says in his affidavit that he knows that under the UPDF Act and the Constitution, where the army is jointly deployed with police to maintain law and order, their participation is in a supporting role and therefore, they can't be held accountable.

Busingye says they were invited by the police and they are the ones who remain in charge of the overall command and control. The judge has fixed January 25 to deliver his decision on the matter.

One of Kyagulanyi's lawyers, Medard Lubega Sseggona says his client is still strong and determined to lead Uganda despite the gross human rights violations caused to him by the state.

"Mentally he’s better than his competitor, physically, like any other person who has been denied food, spiritually he’s very strong and ready to rid Uganda of the tyranny of the village tyrants," said Sseggona.

They think that now they got some votes they can do whatever they want !Hell no.

If that happens organisers and Rebel leaders must be brought to justice We have recent demonstrations in US Congress and those who led protests were called rebels Why Ugand case would be different Doggily Doggy watch out pug!
Report to administrator
123