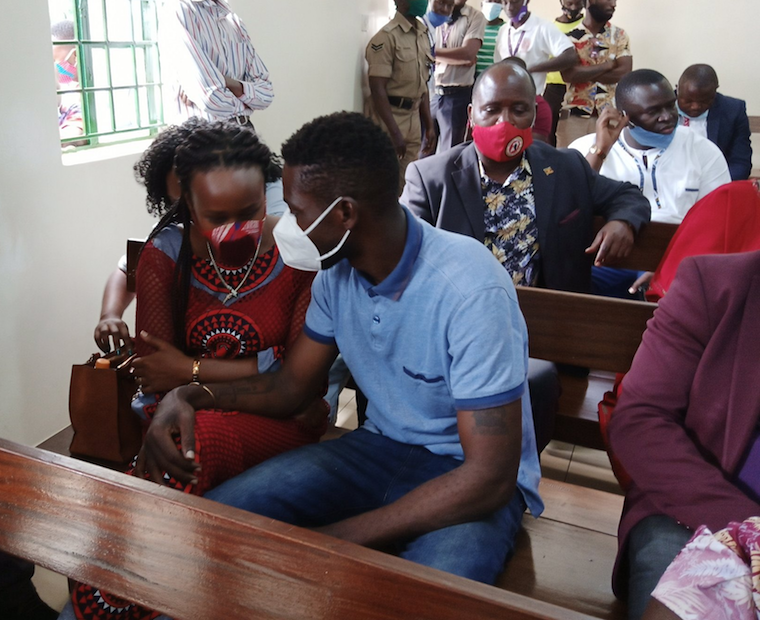 Kyagulanyi whose arrest on Wednesday sparked off protests all over the country that led to the death of more than 50 people and injuring more than 130 others. Kyagulanyi told court that there's no reason as to why he should be court because he has not committed any offence.

“It is my opinion that this case should not be Uganda vs Kyagulanyi. This case should actually be Uganda vs Museveni. You know that it is Museveni who is supposed to be in this dock for killing innocent citizens and for committing crimes against humanity. Your honour am not here because I committed any crime, am here because I offered myself to lead Ugandan into ending 35 years of dictatorship,” an exhausted and frail-looking Kyagulanyi said.

"Even though I have been released, at least temporarily, this is no happy day, we mourn the death of more than 37 innocent who were murdered by this murderous regime. I have learnt that more than 500 people were arrested...They brutalised and tortured us in order to break our resolve. I have news for you Mr. Museveni and all those who work for him, we are not your slaves. Ugandans refuse to be your slaves. You can pepper spray us and break our bodies but you can't touch and break our spirit and soul...We are not giving up, we shall continue fighting for our freedom. To the people of Uganda, do not give up, they cannot kill us all. Ugandans, nobody is going to fight for you, you have to fight for your freedom. Mr Museveni that presidential chair that is making you gloat will soon be no more because the people are going to oust you from power," said Kyagulanyi.

Yesterday, President Museveni warned protestors that they will regret ever attacking his ruling National Resistance Movement (NRM) supporters. Museveni said very soon they will lose the appetite of even touching an abandoned NRM T-shirt on the streets.

Today, the army in a statement, said they will carry out 'pre-emptive and decisive' operations to deal with any riots and protests. Earlier, according to lawyer Nkunyingi Muwada, soldiers stormed the court session and confiscated Kyagulanyi's torn clothes that had been brought to court as evidence.

Meanwhile, the death toll from Kyagulanyi's protests has now risen to 49. According to records at Mulago hospital mortuary, 37 bodies were brought to the mortuary from different hospitals, while 12 are patients died from injuries at the hospital on Wednesday and Thursday.

David Niwamanya, the Mulago hospital principal administrator, says that some of the patients died on arrival at the hospital while others died in the process of being operated to remove the bullets.

🔹 We agree on a common understanding of each other’s position in order to avoid contradictions that may play into the hands of the regime.

🔹 We pledge to work together in areas of common interests. Where we don’t agree we shall strive to understand each other. If one of us is arrested, harassed or mishandled, we shall all stand together in solidarity.

🔹 We have agreed to design a common response to the arrests, brutalizations and harassment of candidates aimed at denying them access to the electorate. We’re on different fronts but our cause is the same - CHANGE

Not me.
I know the Kasese saga . If I had the time , I would educate you on the dynamics and the complexities regarding the politics of Bamba, Bakonjo / Rwenzuru vs Central regimes.

It should suffice to mention that when Museveni was the Minister of Defence under Binaisa`s government , he , he was one of a powerful government delegation that met in Hotel Margherita to work out ways to solve the Rwenzuru rebellion.

As we all know, Museveni headed to the bush a year later. Rwenzuru issue remained unsolved.
Report to administrator
+1 #52 Wooden K. 2020-11-22 22:09
When NRA moved from Luwero to areas of Toro and Kasese before coming back to attack and capture Kampala , a lot of Rwenzuru fighters were recruited into NRA.

When they realized that what they had been promised was not realized , they went up into the mountain from where they could attack NRA forces. Omusinga Mumbere was right up there with them untill he was convinced to abandon the rebellion .

One of the conditions was that Rwenzuru former fighters would be absovled and conscripted into UPDF and the Police . They were also promised a monthly pay .

Because it was Mumbere who was responsible for the agreement , he was also the duty to see that what was promised was fulfilled.

Then come the "elections" in which all Kasese voted for the opposition . Mumbere was blamed for that . He was stuck with lots of Rwenzuru fighters who were neither paid not being told if or when they would join the army.

Naturally , they all gathered in the palace as the Mumbere tried to negotiate with the regime .

The progaganda fed to the media was now that Mumbere had recruited and armed rebels inside the palce ; that they were getting ready to attack UPDF positions etc.
As the palace was being besieged . Museveni pretended that he was negotiating with the Mumbere

Then begoun the massacre .

Not even Katumba Wamala , the army Chief was informed.
None of the naked dead bodies had been found with a weapon.

Without UNITY of ALL, Acholi MUST become Independent Land!

(1) An independent Acholi: Is that a viable option? I always thought that you detest TRIBALISM. (2) What about parts of the Acholiland which have since changed hands?

(3) You know very well that Gen Okello "omwongo tigo" a Langi and further Aboke Girls remain an open wound for which the Acholis should address first. Would "mato put" do the trick?
Report to administrator
+1 #55 Lakwena 2020-11-23 09:14
Kambarage,
1. Where is the rebellion started by the Opposition?

2. Did the Impudent, Gen Tibahaburwa and his NRA use Jaja's to engage in subversion and the 5-year war that decimated Uganda from Luweero to Kitgum?

3. For Heaven's sake Kambarage "the Problem of Africa, Author and Master violence"; Gen Tibahaburwa used children (not young adults) as human shield to execute a concealed war crime and genocide in Luweero; that continued into Greater Northern Uganda for 21 years.

4. These were children whose parents he had massacred, but blamed it on Obote the UNLA,
Report to administrator
+1 #56 Lakwena 2020-11-23 09:19
In other words, what Ugandans/world saw on the streets of Kampala on Wednesday 18th Nov 2020, was what the NRA used to do in Luweero:

i.e. on the one hand were men in Combat Uniform armed with AK47 assault rifles and machine guns , shooting into the crowd. And on the other hand, like a terrorist gang; masked and armed men in civilians doing the same thing.

But apparently all you guys criminally indoctrinated in reverse psychology; come on this platform and obsessively blame your victims of obscurantism, violence, and pure crime against humanity.
Report to administrator
+1 #57 Ainebyana 2020-11-23 14:35
Quoting Wainanchi:

Ainebyana..We are all watching and Museveni kicked from penalty area and scored total victory for Uganda Score 1000: 0 or zilch for Bobi Dingo Dog
Hahaha

Museveni has never scored, even in an empty goal, i.e. a goal with no goalkeeper. The man cannot fight even a young adult without trying to tie the young man's hands behind his back.

The challenge for you and your hero, let him come alone to Namboole for a duell among men, with no weapons, just bare hands. You and your hero are all cowards. Keep watching this space.
Report to administrator
0 #58 Akot 2020-11-23 19:29
Kasede, thanks, but,

Don't forget that all the other tribes UNITED against Acholi to bring in Museveni! Museveni ruled for +20 years while he killed Acholi, UN confined Acholi in refugee camps, others went in exile & all this went on while tribes that brought Museveni in UNITY just lived.

This is why Akot calls for UNITY or Independent Tribal States, so that no tribe fights another as now, the common enemy is Museveni!

Don't forget Kony is still outside there & Acholi could bring him to justice if Acholiland was Independent because Kony killed so many Acholi, set their villages on fire, killed their cows, chickens... including Akot's village, because as he said, Acholi didn't join him in fight against Museveni!

So you see, either Ugandans bring down the tribalistic system & UNITE to end Museveni's evil rule or they MUST go seperately tribally & live without Museveni!
Report to administrator
0 #59 Akot 2020-11-23 19:40
Kambarage,

Akot has lived outside Uganda since 1987 & knows it's only ending tribalism, the means Museveni uses to stay in power, that will save Ugandans!

Living in Europe gives Akot chance to tell Ugandans what they MUST do, if they want help from Europe:

*Bring down the tribalistic system or go for Independent Tribal State, then each tribe will declare itslef a country to make its stand with the outside world & be recognised as a nation.

Akot cannot be tribalists living in Europe since 1987, right?


This is why Akot knows unless Ugandans bring down the tribalistic system & UNITE, they willbe alone with Museveni & family for good, while developed world watch in silence!
Report to administrator
0 #60 Akot 2020-11-23 19:59
Wooden K., thanks.

So you see, as you clearly put the situation in your comments, only bringing down the tribalistic system then UNITY, will save us from Museveni! Then we will have no excuse, but to either Reform the Republic or go for Independent Tribal States!

Akot will add that long as Acholi tribal leader helps bolster Museveni through the tribalistic system, no Acholi should dare stand up & say nonsense!

How many Ugandans living abroad still talk about those in the country, call them to UNITY to end Museveni's rule & get chance to education, healthcare, good housing with electricity,/running water...in a FREE country/tribal lands?

Akot knows Europeans will NEVER sympathise with Ugandans as long as they maintain the tribalistic system!
Report to administrator
123456