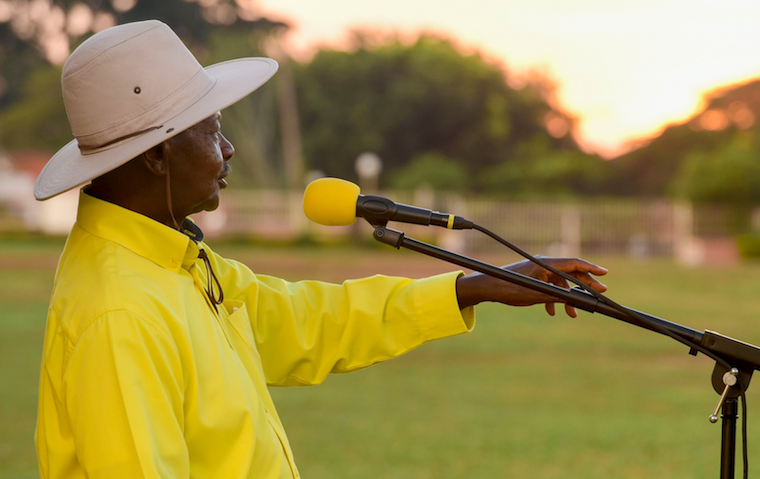 While speaking in Kotido during his campaign trail, Museveni said very soon, the protestors will find it extremely regrettable to attack any NRM supporters. On Wednesday, spontaneous protests erupted all over the country following the arrest of National Unity Platform party presidential candidate Robert Kyagulanyi aka Bobi Wine. Museveni said the protests were instigated by homosexuals who want to destabilise Uganda and don't want the elections to take place next year.

During the protests, some NRM supporters dressed in party or yellow T-shirts were targeted in downtown Kampala while some were harassed and ordered to remove them including women. Also, a video emerged online showing an NRM branded vehicle seemingly lose control and ploughing into pedestrians around Mini Price near the Old taxi park after as the driver raced away from stoning protestors.

”Whoever started it will regret. Those who attacked people in Kampala [dressed in NRM T-shirts] will soon lose the appetite to touch it [T-shirts]…Even if they leave it abandoned there you will not touch it,” said Museveni who made no mention of the casualties of the protests.

Museveni's warning comes after over 30 people were shot dead in Kampala alone while more than 80 people are nursing bullet wounds in Mulago hospital after the army violently responded to the protests. Non-uniformed gunmen were also seen on the streets firing live ammunition indiscriminately at people in shopping malls and offices.

In neighbouring Mukono district, government vehicles and NRM branded vehicles had trouble driving through towns on Wednesday evening after some were ordered to go back where they came from by the angry protestors. Also, campaign posters of NRM candidates were taken off the streets with only the opposition posters spared. The youth even attempted to set alight Museveni's giant campaign billboard planted near Collins hotel.

The protestors reasoned that opposition candidates and supporters, particularly those of Kyagulanyi and Forum for Democratic Change’s Patrick Oboi Amuriat have been unnecessarily teargassed, arrested or harassed by police for allegedly flouting COVID-19 guidelines yet the NRM candidates continue campaigning without any interruption.

Meanwhile, NRM mobilisers in Ggoma division, Mukono municipality yesterday announced the suspension of their campaigns citing insecurity in the area. About 200 mobilizers were tasked to campaign for the party flag bearers including the party’s presidential flag bearer in the area, however, following the protests many of them have halted the campaign until the situation normalizes.

Since Wednesday, Mukono district has been engulfed in protests from NUP supporters. Although security was beefed up in the district, the protests resumed on Thursday in areas of Kiwanga in Seeta, Industrial Area, and Nasuuti trading in Mukono Central division and Kalagi town in Mukono North with supporters burning car tyres and demanding for the unconditional release of Kyagulanyi.

John Baptist Wamala the head of mobilisers in Mukono municipality says that they fear of being attacked by angry NUP supporters. Wamala wants the government not to be selective in enforcing the Covid-19 guidelines during campaigns. Wamala blamed the police for the violence, saying their selective application of COVID-19 guidelines has caused understandable frustration among opposition supporters.

Ronald Ochola a mobiliser in charge of distributing NRM posters in Seeta town says they are now uncertain about their living and promoting the party. Bosco Rwakikara the coordinator in charge of Ggoma division, says is now challenged leading his team to field at this time when there is still chaos in the entire district.

But "Problem of Africa", Gen Tibahaburwa; what is National Resistance Movement? Is it a thing or people?

Obote (RIP), Amin (RIP), Gen Tito Lutwa (RIP), are no more; and Jamil Mukulu, etc. are under under your Iron grip.

But after 35 years of abusing power: corruption, brutality, torture, imprisonment without trial and murder of Ugandans on the streets in cold blood; what is it that you and the NRM) are still "Resisting"?

They are resisting progress. They want a gullible citizenry that they can exploit for their lifetimes.

They are addicted to the piggy bank they call theirs they liberated...UGANDA.
Report to administrator
123