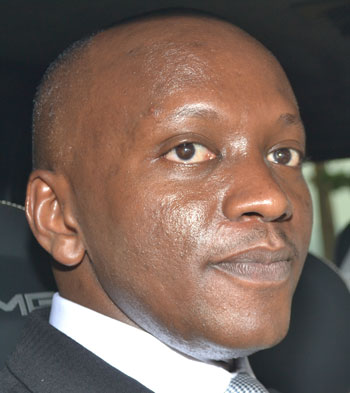 The property located on Plot 71, Nkrumah road, was leased in 2010 by then Kampala City Council to Securex Amenities (U) Limited whose directors were listed as businessman Ephraim Ntaganda, Bob Kanaabi and Innocent Mutajabura.

In 2011, KCC turned into an Authority and Erias Lukwago was elected as city lord mayor. He soon demanded investigations into the sale, often clashing with the then executive director of KCCA, Jennifer Musisi, who he accused of frustrating his efforts. In 2017, Lukwago asked the auditor general to conduct a forensic audit into the disposal of the property.

After more than two years, the auditor general finally produced a report dated September 25, 2020 which was unveiled on Monday by Lukwago before the press at City Hall.

According to the report, Uganda Land Commission and Kampala City Council (KCC) did not comply with the requirements of section 59 of the Local Governments Public Procurement and Disposal of Public Assets regulations of 2006 which requires the involved government agency and the buyer to carry out due diligence.

The report further indicates that KCC and Securex did not obtain prior approval of the minister to dispose of the property as required by the Public PPDA Act 2013.

The auditor general also noted in the report that Securex did not fulfil terms of the lease agreement. He specifically pointed to the promise by Securex to re-develop the premises into a modern commercial complex and give one entire floor to the KCCA for the dispensary. Lukwago expressed dismay about how such a facility that helped a number of city dwellers vanished through a sale he calls fraudulent.

"The long and short of it is that that transaction was a nullity, was fraudulent and the facility should be recovered that is Plot 71, Nkrumah road which was given to Securex Amenities Uganda Ltd. Why this particular matter is significant, we have been losing our facilities just like that. You know, there has been a scramble for grabbing of KCCA facilities; schools, playgrounds, markets, hospitals and what note. And now if we manage to at least retrieve and recover one like this, it is a very very big achievement and we’re going to vigorously pursue this and ensure that we recover this facility, it is quite important," said Lukwago.

Lukwago says they shall use the report to fight hard to get the land back. According to the report, although the property was leased for an initial period of 5 years in 2010 and an extension for 40 years in 2012, the title was later changed into freehold.

The report shows that in 2012, Mahmud Bharwani, Shaida Bharwani and Baiju Joshi Bharwani acquired interests of the three directors Securex. The Bharwani family hence took possession and later changed the title from leasehold to freehold.

The auditor general, however, notes that the Uganda Land Commission did not avail disposal files for the land which he says creates doubt whether the commission complied with its lease application process when leasing the property to Securex. Lukwago says they shall convene a meeting this week to determine the next course of action.

"All these transgressions point to one thing that the transaction was treated in illegalities. And the question you are asking what steps are you going to take? First and foremost we have lined it up on the executive committee reports to be implemented. So this one on Thursday this week, we’re going to discuss the modalities of implementing this report because we’re duty-bound to implement these reports. And then if these reports, we task our legal directorate to explore all the available legal mechanisms that can help us recover this particular facility. There’s a legal array of legal options we can take under the law to recover it. Bottom line we want this facility back to KCCA," Lukwago added.
Since the property was leased out, the dispensary ceased to exist and yet no commercial complex has been set up. This is not the first case where Ntaganda and Kanaabi acquired city property and soon transfer it to Bharwani.

In 2015, a parliament probe revealed that in 2010, the two operating as directors of Prestigious Apartments Limited acquired Plot 34A Kyadondo road and 5C Mackinnon road belonging to Nakasero primary school.

The company that had been incorporated on August 5, 2010, expressed interest in the land and on October 29, 2010, less than three months later, Uganda Land Commission granted lease over the 0.657 hectares of land. Days later, the duo transferred their 100 per cent shares to Mahmud Bharwani and Ms Shaida Bharwani.

0 #1 WADADA rogers 2020-10-28 09:14
Is this news, we have always known these guys to be conduits through who high ranking Government officials steal private and public land, it is an open secret.

I think the name Ntaganda means stealing
Report to administrator
0 #2 ZZunguluzzugulu 2020-10-28 10:17
This Ntaganda is the 'only' land own in Buganda land whose property has something to do with development in Uganda!

If his land does not have a controversy with a pubic school, hospital, road etc then that is not Ntaganda. I hear he came from the neighborhood of DRC or Rwanda and now owns all the hotspots?
Report to administrator
0 #3 Kipto John Cheburiot 2020-10-29 07:31
Lord Mayor and team, you have my full support and I believe that of many out there to expose this thuggery and recover public property.

There is this well established clique of Lands, KCCA, etc working with foreign agents NTAGANDA to defraud the country of land.

EVERYTHING NTAGANDA and Barwhani TOUCHES STINKS!!

I wonder why it's hard for many Uganda to realize that these are groups/people well funded by their home governments to buy all land in Uganda for their governments as we sleep!!
Report to administrator
0 #4 Hiryaabba 2020-10-29 07:57
This name Ntaganda, sounds familiar. Is this the ruthless rebel who, at one time operated in DRC (Congo) and was arrested and handed over to the ICC for trial for crimes against humanity?
Report to administrator
0 #5 Wasswa Ssimbwa Godfr 2020-10-29 11:42
This is the impunity of the NRM liberation leeches.

How can a public interest facility disappear in this pathetic cloud of private greed??

Investigations were blocked by Musisi. So, wasn't she a trojan horse for these thugs??
Report to administrator