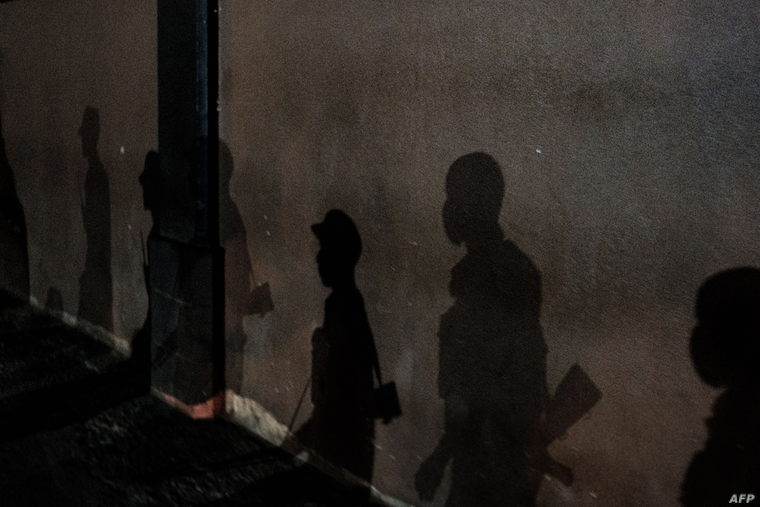 Shadows of UPDF personnel on patrol

Security personnel thought to be from Chieftaincy of Military Intelligence (CMI) stormed Kakwenza Rukirabashaija's home in Iganga Friday morning and took him into custody.

It is the second time Rukirabashaija, a government critic has been arrested this year. Rukirabashaija was taken into custody in April over a fiction book titled "The Greedy Barbarian."

The book describes a young man who leaves the countryside, rises to power and is overtaken by greed and ego, leading to his demise. Many saw it as a commentary on President Yoweri Museveni.

According to lawyer Eron Kiiza, the second arrest was prompted by an unpublished manuscript that details the writer's first arrest, detention and alleged torture in April by military personnel.

"He has been arrested this morning [Friday] at 6:30, for continuing to write," Kiiza, told VOA in a phone interview.

In the draft, partly shared with VOA, he recounts what he describes as horrendous and indescribable torture while in custody. He writes that one day, an officer kicked him off a toilet and then pushed his face inside the bowl.

He says the officer "then reached for the keys in his pocket and chained me on the bars that were out of the toilet wall, and I spent the night there, praying to God. Writing is not a crime. It is not a crime to be creative."

Danson Kahyana, president of the Uganda chapter of Pen International, a writers' association, said Rukirabashaija's arrest is a clear message from government to writers that they will not tolerate dissenting and critical voices.

"By the time they even reach that level of arresting you for a book that has not yet come out, I think it shows that we have really lost it," Kahyana said. "We are supposed to be governed. And governing does not mean oppression. It's really unfortunate to see that we are going back to the dark days that Museveni supposedly liberated us from."

The army and police officials contacted said they have no information on the writer's alleged arrest.

I think the first family is being myopic, if i were the one, i would try to investigate this young man's source of information"

BUT THAT IS THE PROBLEM RIGHT THERE "INVESTIGATE" A.K.A TORTURE FOR INFORMATION. WHAT THEY SHOULD BE DOING IS SUE THE AUTHOR IF THEY FEEL THAT THE FICTION WORK IS DESCRIBING THEM.

In which case they will have to prove beyond a shadow of doubt that indeed its them that Kakwenza is talking about in his book, and to do that they will have provide evidence that indeed greed and barbarity run in the family. #FREEKAKWENZA
Report to administrator
+3 #5 Lakwena 2020-09-21 13:37
But Dr. Danson Kahyana, if the regime has sunk this low, which dark days have Mr. M7 liberated Ugandans from?

In other words, since 1986 Uganda has degenerated into pitch darkness, where we are groping around.
Report to administrator