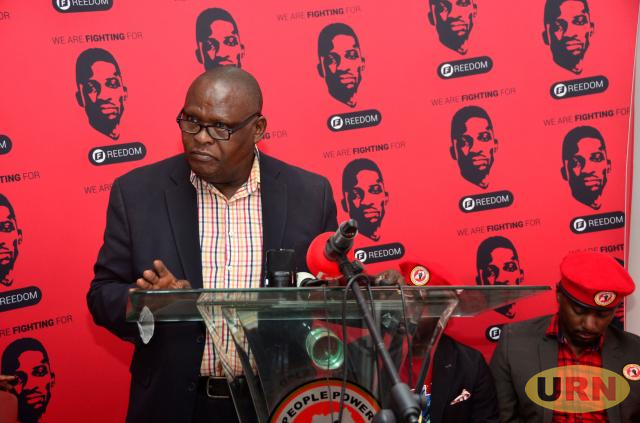 Speaking to reporters today at the Uganda Media Centre in Kampala, Brig Flavia Byekwaso, the spokesperson of the UPDF confirmed that other security agencies are holding Kibalama for his own safety but declined to name who was holding him. She also made it clear that UPDF is not involved in the operation.

Byekwaso, however, added that whoever is holding Kibalama is doing so for a good reason. She says that security forces have credible information that there were people who wanted to harm him.

“The presence of soldiers at his premises is for a good reason… From what I picked there were intelligence reports that indicated threats to his life and planned violence to his premises. So these are security guards protecting his premises,” said Byekwaso.

Two days ago, information emerged that soldiers had surrounded the home of Kibalama found in Nansana municipality in Wakiso district, and had taken him to an unknown location with his known cellphone switched off. Byewkaso who refused to disclose the actual nature of threat said that the security was holding Kibalama in order to give him maximum security.

“Don’t ask me why because everybody knows how to do their work. The security depends on the gravity of the threat if in their assessment the threat required them to remove him and put him somewhere to give him maximum security that is what is going on,” said Byekwaso.

Yesterday, a video of Kibalama emerged online denouncing Robert Kyagulanyi Ssentamu, the new president of NUP. In the video where Kibalama looked seemingly composed but tired, said Kyagulanyi had failed to meet his part of the bargain.

He said he had been promised $5 million but none of this has materialized. He also admitted that indeed he had left out members of his party when they held a delegate’s conference in July in which they elected Kyagulanyi and his confidants as the new leaders of the 16-year-old party.

“When someone comes up with an offer as good as five million US dollars, any individual will go in for the same. That’s how we fell into the trap. If we didn’t bring in People Power group, the party would still be flourishing,” said Kibalama.

But speaking to reporters today following a court appearance in which his leadership of the party is challenged by a section of members, Kyagulanyi denied ever promising to pay Kibalama any monies. He said the State in behind Kibalama's change of mind to try and derail his plans of taking on President Yoweri Kaguta Museveni in the 2021 general elections.

“Museveni is doing everything possible so that I don’t appear on the ballot paper…this has been evident from challenging my academic qualifications, my date of birth, planting guns in my room and much more…we guarantee you that you are going to see many unbelievable things but I guarantee you, Mr Museveni, that we are going to defeat you in a democratic election,” said Kyagulanyi.

Anyway , lets save time and just say that you are entitled to your opinion . So , am I

Obote was no GENIUS.!

A genius leaves behind a legacy that lives beyond his time. Where/ what is Obote`s legacy ? In Museveni`s State House where Obote`s son sold his wife ?

I know Obote . I know he was not an intellectual . I know that he was a "climber " who thought he would survive by destroying his hosting tree.

Uganda is not a modern state , unless modern has a different meaning to you. Is Akokoro modern ?
It is also debatable if Uganda is a state.
Report to administrator
+1 #22 Wooden K. 2020-09-20 14:03
Yumbe , I dont think you even know what you are talkning about

Obote inherited a "fortune" when colonialist left . .Because of his incredible inferiority complex , and lack of intelligence, he wasted it all by setting up a crush that we are yet to recover from .

His own family paid a high price for his never ending blunders. Now Museveni is using them like his prisoners of war. They can`t even openly grieve his memory without Museveni`s permission .

All the dictators that we have had were created by Obote.

It was Obote who introduced guns into politics , He is the founder on tribal armies . Oppressing , abducting , murdering opponents is Obote`s legacy . Using Hotels and safe houses to torture was created by Obote.

Where do you come from Yumbe ?

Don`t go missing now. Stay here and tell me which part of Uganda you come from . I will show you skeletons resulted from Obote`s recknessness.
Report to administrator
-1 #23 Kasede 2020-09-20 18:22
Quoting Wainaichi:

Congratulations to our security.We have learnt bitter lessons from the past and are now wide awake.

Very happy to hear that this political figure is safe and sound.!!!

We hope he will distance himself from Bobi Dingo Dog who tried to cheat him.Hahahahohohi

Dear Mr Mukulu, we understand your fear of the change at the presidential level, which is now INEVITABLE.

We (the people) are giving democracy a chance, thereafter, your chosen method will be the last option available to YOU & WE (the people). This last choice is yours & WE (the people) will be the Respondents [legally speaking].
Report to administrator
0 #24 kirya 2020-09-20 23:16
Obote opened the doors for the dictators.
I am sure he got m7 into the university of Dar Salam
without any qualifications through his friend
Nyrere.. Obote knew he was a refuge but wanted
to use him. Now we have an animal out of control
killing natives stealing and does not want to leave
in peace.

Obote was a fool and an idiot with the brain of a pig.
Report to administrator
123