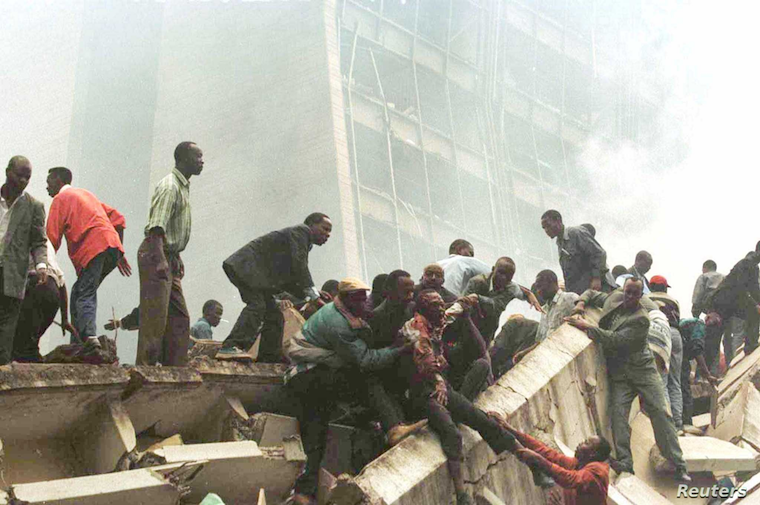 FILE - An injured man is removed from the wreckage after an explosion near the U.S. Embassy in Nairobi on Aug. 7, 1998.

Doreen Oport was on a tea break when she heard the blast. A 15-year employee of the U.S. Embassy in Nairobi in 1998, she said she wasn’t fazed by the sound at first. She thought it was a tire bursting on a busy street.

Moments later she felt the unmistakable force of a detonation nearby. She would later learn that the first sound was a grenade, thrown at guards outside of the embassy. The second sound was a truck laden with explosives.

The near-simultaneous attacks against U.S. embassies in Kenya and Tanzania on August 7, 1998, killed 224 people and injured more than 5,000. They were orchestrated by Osama bin Laden and executed by al-Qaida operatives, mostly harboured in Sudan. Earlier this year details emerged of a $335 million compensation fund for victims of the attacks, like Oport, and their families.

But Oport, who moved to the U.S. and became an American citizen, was dismayed to learn the details of the compensation plan. She learned that people like her, who became naturalized citizens after the attack, could receive several hundred thousand dollars, but people who were citizens at the time of the attack stand to receive millions.

“I think it's unfair when they want to make us feel of a lesser value than Americans,” Oport said. “It basically sets a value of human lives, both American and Kenyan... when basically, if it was not for Foreign Service Nationals doing the work, then these embassies or consulates would not stand. The work continues. Human lives should not have a value of who gets what and who doesn't get what. We are all the same.”

The fund is part of an agreement between the U.S. and Sudan.  It follows a May U.S. Supreme Court ruling finding Sudan liable for the attacks because its government harboured al-Qaida militants and allowed them to transport money and weapons across the border to Kenya.

Sudan is seeking to normalize relations with the U.S. following the ouster of longtime leader Omar al-Bashir, and victims’ compensation is a key part of the normalization process. The State Department says it has pushed hard for compensation for foreign victims, breaking from past precedent.

“This has been a high priority for the U.S. government, given that these foreign nationals were our employees and contractors,” a State Department spokesperson said in an email to VOA. “Sudan’s commitment to provide meaningful compensation for non-U.S. nationals is of an unprecedented nature.”

“While non-U.S. national victims would not receive the same levels of compensation, the substantial amount of compensation committed by Sudan demonstrates a good-faith effort on the part of Sudan to address their losses,” the State Department said.

Michael Miller, the co-lead attorney representing nearly 600 people in a lawsuit against Sudan, said the State Department is not treating his clients equally. In May, the U.S. Supreme court validated a judgment against Sudan on behalf of victims worth billions of dollars. Now, Miller said, the State Department is seeking to override this judgment with a diplomatic agreement that would let Sudan off the hook for far less.

“We were shocked frankly when the Supreme Court affirmed our judgment and the Trump Administration agreed with us only to find the State Department to say ‘no, your East African clients are not worth as much,’” Miller told VOA.

There is an effort underway to have Congress approve the State Department deal and grant Sudan immunity from further claims. More recently, victims of the September 11, 2001 attacks on the U.S. and their families have joined the chorus, urging Congress to reject the agreement, saying it does not include compensation for all victims of al-Qaida’s attacks.

He believes Sudan needs to abide by the terms of the punitive damages awarded to his clients in May or negotiate a settlement.

“They need to settle with us or they need to pay us the full judgment,” Miller said.

Although Oport considers herself lucky to have survived the attack, she has suffered. She had foreign objects lodged in her body, burns on her scalp, an injured back, difficulty eating for years and psychological trauma.

Transported to a hospital, it wasn’t until much later that she heard that many of her colleagues died because they had rushed to the windows after the first blast instead of laying on the floor to protect themselves. They were not prepared for terrorism.

“Kenya was a very peaceful country and nobody ever thought that there would be a terrorist or a bomb attack in the country,” she said. “We were never trained or taught that, ‘if something like this happens, this is what you do.’”