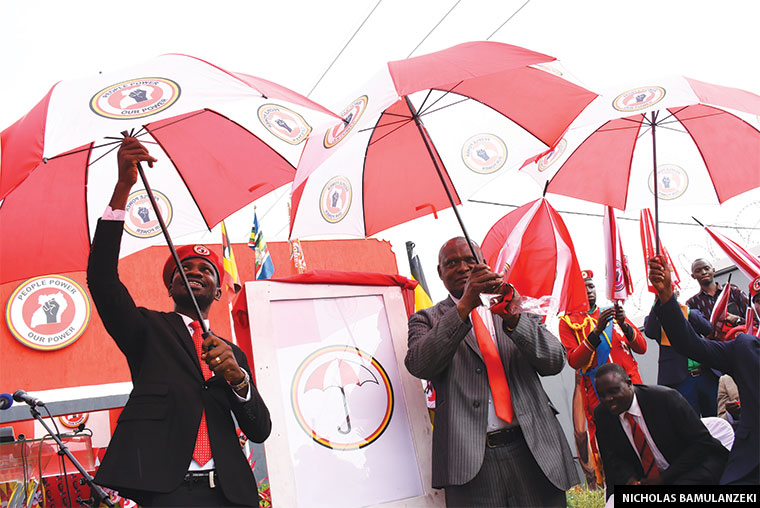 The National Unity Platform (NUP) president, also Kyadondo East MP, Robert Kyagulanyi aka Bobi Wine has to extinguish yet another political storm after Moses Nkonge Kibalama the former founding president of the National Unity, Reconciliation and Development Party (NURP) made a U-turn and says he wants to have his party back.

Kibalama who sold out now says the NUP leadership failed to pay him $5m as agreed during the takeover. Following the launch of NUP on July 22, some purported former members of the NURP came out to claim that Kyagulanyi had illegally hijacked their party and leadership after he forged their signatures.

Kibalama and the Electoral Commission came out and said the change in leadership that saw Kyagulanyi elected the party president had been done legally when NUP morphed from Kibalama's NURP.

Kibalama's family members now claim that he has been missing for some days after being kidnapped by an identified people. But in an undated social media video, Kibalama says he previously entered into a financial deal to sell his party to Kyagulanyi because the $5m offer was too irresistible and that is how they "fell into the trap."

He says when he started his NURP party in 2004, he had no idea that Kyagulanyi with his "young boys" would contest in the political space of Uganda.

"Sometime last year that is when we tried to change the party name so that we shorten the name in order for people - the villagers to be able to pronounce the name. Instead of calling it NURP, we shortened it to National Unity Platform - NUP. That was to help our people to be able to grasp the name…we invited 41 members which did not impress some of our members. Some of those other members decided to take matters to court. Much as the matters are before court, we had already took [sic!] a change of mind that we shouldn’t really go back with these young men because they have not fulfilled all the promises they had made." Kibalama says in the video.

In the video which appears to have been shot with a professional camera and lighting at a balcony in the city centre, Kibalama appears uncomfortable, often looking from side to side and shifting uncomfortably in his seat.

Kyagulanyi who has battled several betrayals within his camp ever since he expressed interest in contesting for the presidency, in a statement today said Kibalama has now been compromised by President Yoweri Museveni who is afraid of the political wave sweeping across the country.

”This is yet another attempt by Gen. Museveni’s regime to derail our progress in the struggle for freedom and democracy. For several days now, Mr Kibalama’s phones have been off. That of Mr Ssimbwa has been on and off. When it is on, it is picked by someone who identifies himself as a soldier and claims that they have him in custody." Kyagulanyi says.

Kyagulanyi says on Monday this week, his legal team went to court where Kibalama and Paul Ssimbwa Kagombe the former NURP secretary general had sworn and signed affidavits opposing the case brought against the NUP leadership over the alleged forging of party member signatures. Kyagulanyi says however to their shock, the NUP lawyers found that Ssimbwa and Kibalama had sworn two contradictory affidavits.

”To know how shabby the characters who rule over us are, the same Kibalama who has appeared on TV several times confirming the legality of everything we did to change party leadership, was now writing that we never followed the law! They desperately wanted an injunction to stop our party activities, but the judge refused.” Kyagulanyi added.

According to Kyagulanyi, Kibalama, whose house is now guarded by UPDF has been compromised and coerced into disowning NUP and its leadership. Kyagulanyi’s short political journey has been marred by betrayals and state infiltration, the reason many say he surrounds himself with only his family and friends.

But like The Observer back on July 29 (read: New party: How Bobi Wine kept his secret) Kibalama has been working closely with the NRM and sources within NUP said then that Kibalama who has ‘a great appetite for money’ can’t be a man who can negotiate a deal with Kyagulanyi and pull it off without the state ever knowing.

“He has no credibility; you know he has ever been implicated in a robbery. He has also ever forged government stamps to take a delegation from Uganda to attend a UN conference. That’s not a man you would trust,” a source told The Observer.

“I think Kyagulanyi either knowingly or not is being used. Do you know that on the day Steven Kaziimba Mugalu was sworn in as archbishop, Museveni met Barbie’s parents?” a person familiar with what happened in People Power told us referring to Kyagulanyi’s wife Barbie Itungo.

Kyagulanyi is already battling legal battles over altering his age in official documents.