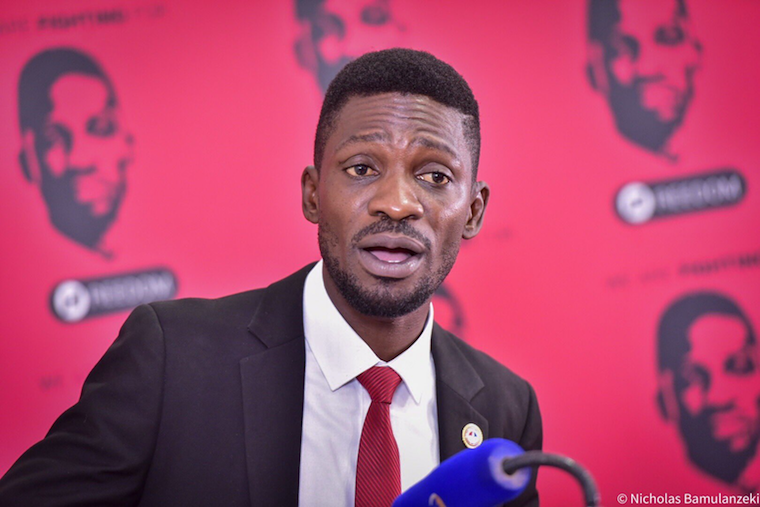 At first, National Unity Platform (NUP) officials roundly rejected any suggestion that the party’s flag was up for sale to moneyed political aspirants.

But last week, there came a detailed, new admission from NUP president Robert Kyagulanyi Ssentamu aka Bobi Wine. To contain the harsh criticism and growing anger over claims of extortion within the party, Kyagulanyi publicly admitted that some in the NUP rank and file were extorting money from local government and parliamentary aspirants to support their bid to become party flag bearers in the 2021 general election.

Speaking at a press conference last week, Kyagulanyi admitted that there are people within the NUP rank and file who had put the party flag on the market.

According to people familiar with NUP, flag bearers are not chosen through an internal election like most political parties are doing. NUP insiders say the party leadership leans more on family ties, money and friendship to handpick flag bearers.

Multiple interviews with people with direct insider knowledge of NUP, confirmed that friends and family of the ‘Principal,’ (as Kyagulanyi is fondly called in NUP circles) or his powerful elder brother Fred Nyanzi Ssentamu or those with money bags can easily get or buy NUP’s much-coveted flag.

In NUP, insiders say, the faithful have become so attuned to Kyagulanyi’s desire to surround himself with people he has worked with or been friends with as a musician that they have literally rolled out red carpets for all the principal’s friends and family.

And that belief in keeping a close-knit circle style of friends led a fortnight ago to the ouster of former presidential candidate Walter Samuel Lubega Mukaaku as deputy chair of the party’s Election Management Committee [ECM]. He was replaced by Tony Bikumbi, commonly known as Tony Houls.

“What does Tony Houls know about politics that you can drop Lubega and appoint him?” asked one NUP official.

However, another Kyagulanyi confidant told The Observer that the musician-turned-politician has been betrayed severally and chooses to work with people he believes cannot betray him. He pointed to Bikumbi and another Kyagulanyi pick in Eddy Kayabula as people who the principal totally trusts.

“Those guys are loyal to Bobi, because he has been with them through thick and thin. I’m not sure there is any amount of money you can give them to betray him. So, he has to put them on the committee to take care of his interests because he doesn’t trust those politicians,” the source added.

But this assumption was dismissed as false by another source with direct knowledge of the inner dealings of NUP.

“All those guys close to Bobi Wine are already trading their access to him. If you want to meet him, you have to pay them. I wonder why he even thinks that they are incorruptible,” said one MP who recently crossed to NUP.

Insiders also say money easily attracts support from the party’s top men for any bid for the NUP flag. In Lubaga South constituency where Aloysius Mukasa is competing for the NUP parliamentary flag with Lubega Mukaaku – the more moneyed Mukasa seems to curry lots of favour with the top party leadership.

According to our sources, Mukasa has in the past bankrolled NUP and its foster parent People Power. Mukasa is not only a close friend to Nyanzi and Kyagulanyi, but is said to be the boyfriend of Catherine Namuleme, a sister to the duo.

“He has brought money to boost the party and our principal knows about it… So, when it comes to NUP issues, they will always favor him. There are many such guys who have money, which is creating confusion in NUP. As we talk now, NUP needs money and these are the guys who have it but the party has no capacity to scrutinize and investigate its source,” one official said.

When he announced Mukaaku’s firing at a press conference, Kyagulanyi said there are people who have joined NUP but have not forgotten the parties they came from.

“You can’t belong to two parties at the same time; you have to choose,” Kyagulanyi said.

It is said that Mukaaku used his position to promote the interests of his former party, the Democratic Party. But Mukaaku told a press conference a day later that he has never corruptly favored any candidate. He instead said there are NRM people dressed in red who are now bent on disorganizing NUP. He said such people were trying to use money from suspicious sources to take over the party.

Interviewed for this story recently, Mukaaku said, “I always want to play fair, and I said pretty much I needed to say during my press conference and I would want to leave it at that.”

But our source said it was unfair to accuse Mukaaku of promoting DP within NUP. He said every time people like Mukaaku have tried to question the direction and actions of NUP, they are reminded that the party recruits from all political parties.

“When you try to question the source of the money, they say the party is recruiting members from everywhere; therefore, their monetary contributions cannot be rejected based on their history of ever belonging to NRM…,” the source said.

Mukasa couldn’t be reached for an interview. When we called Mukasa’s cellphone number, an assistant picked and said, “He [Mukasa] is currently in a meeting but I’m going to tell him to call you back.”

Interviewed for a comment, Fred Nyanzi, NUP’s secretary for mobilization, denied that he accepts money from aspirants in exchange for the party flag.

“It’s not true that anyone who speaks to me gets the card, that’s very wrong. As one of the elders in the party and with a lot of experience, I have got a duty of harmonizing aspirants before they go in that mayhem of elections,” Nyanzi said.

He challenged the media to bring any evidence to show he is supporting Mukasa to get the NUP ticket in Lubaga South.

“Have you ever heard me say this is my candidate? Those are typical rumors which we can’t base on. The problem with journalists is that you are looking for problems all the time; try to see the positive things too... My objective is to reduce friction from within so that we get the election without conflicts,” Nyanzi said.

But minutes later, Nyanzi’s phone redialed accidentally and when this writer picked it, the NUP official seemed to be speaking to someone else completely oblivious to the fact that someone was listening into their conversation. In the conversation, the unidentified voice told Nyanzi that every politician is trying to be the flag bearer of the one month-old NUP.

In response, Nyanzi said, “Harmonizing is the best strategy, don’t tell me nonsense,” before adding,
“Ffe twagala Mukasa Aloysius nebwebanaakola batya [We want Aloysius Mukasa no matter what they do”].

What is happening in Lubaga South is playing out in Lubaga North and Kyadondo East. In Lubaga North, NUP stalwart James Mubiru, according to Nyanzi, had to cede ground to KCCA speaker Abubaker Kawalya. According to two people interviewed for this story, Kawalya has got money and is willing to spend it on both NUP and its top leaders.

“I have heard that Nyanzi and people around Bobi Wine are picking money from aspirants… They are all profiteering from this thing because they know for a fact that it’s close to impossible to defeat Museveni. However, they can at least get something from their newfound role as kingmakers,” said our source.

But Nyanzi rejected the notion that Kawalya is favored because of money. He said the party leadership engages all parties.

“We sit with candidates and harmonize in order to create peace amongst them. Some of them withdraw and resort to lower posts and those in those positions do the same and adjust because we don’t have enough time to carry out primaries,” Nyanzi said.

For Kyadondo East, NUP has three major candidates in Muwada Nkunyingi who competed with Kyagulanyi in the 2017 by-election; Tony Ssempebwa, the Kasangati Town Council mayor; and Khalid Ssimbwa. Kyagulanyi is conflicted in this race because Ssempebwa was one of the first people to support his Kyaddondo East candidature and Ssimbwa is said to be a fairly rich guy who handsomely spends his money on NUP.

“By the way, when Kyagulanyi’s car was impounded by the police following the Arua fracas, Ssimbwa gave him his Landcruiser which he used for some time. I think he feels he is indebted to him,” one person familiar with the story told us.

The same story is playing out in other constituencies like Kawempe South where long-time Kyagulanyi confidant Roy Ssembogga is tussling it out with journalist Kazibwe Bashir Mbaziira. In Kawempe North, the incumbent Latif Ssebaggala was nudged to go for the Kampala lord mayorship. Other aspirants for Kawempe North include Sulaiman Kidandala, who is in charge of mobilization in NUP and KCCA councilor Muhammad Ssegirinya among others.

What do the candidates say?

Muwada Nkunyingi said he has met party officials to  harmonize who should be the flag bearer.

“I emerged as the best candidate because parliament is not about filling positions but representation. We need a candidate who can address the House. But the party has its internal handling of these matters and they will continue to engage all players to see who goes where. I think they are doing this to minimize casualties in the primaries…” Nkunyingi said.

Sulaiman Kidandala has no objection to the harmonization process.

“In any situation where there is a victor and a vanquished, that is not the best form of democracy. The best is where people agree and all of them walk away happy. But it’s not the only channel we are using to sort out candidates. We are using scouts to give us reports in the field and intervention by elders, among others,” Kidandala said.

But for Kifampa Siraje Nsambu, who is eying the Lubaga South parliamentary seat, handpicking candidates works against Kyagulanyi’s pro-democracy advocacy.

“I don’t think consensus builds democracy; if these people are not opportunistic and they believe in the ideas of NUP, then let them subject candidates to a primary,” Kifampa said.

“They can form structures within the remaining period and then hold primaries; otherwise, this process is counterproductive to the ideals that Kyagulanyi said is fighting for because harmonization is promoting fraud and this wouldn’t be different from the one we are talking about in NRM,” Kifampa said.