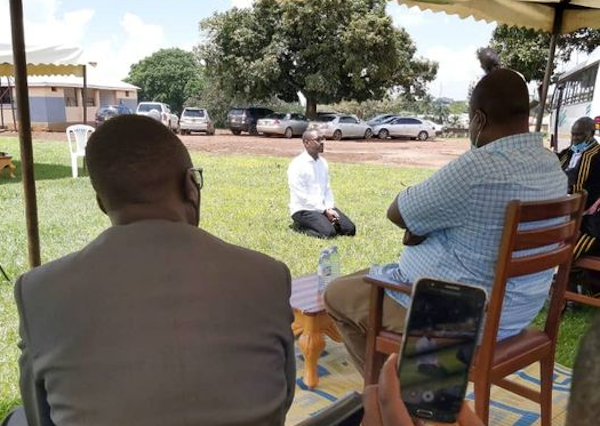 The family of the late children rights activist, Kenneth Akena Watmon, who was killed by Kampala businessman Matthew Kanyamunyu in 2016 has accepted his apology and forgiven him through Mato-Oput, an Acholi cultural reconciliation ceremony.

This follows a successful two-day protracted dispute resolution negotiated by elders from the two families at the Acholi chiefdom in Gulu city over the weekend. The discreet family centred-reconciliation was witnessed by Rwot David Onen Acana II, the Acholi paramount chief backed by Acholi religious leaders.

Kanyamunyu was arrested in 2016 on suspicion that he drew a gun at Akena after he reportedly knocked his car at a shopping mall parking lot in Lugogo, Kampala. Akena had reportedly gone to apologize to Kanyamunyu after the accident, but Kanyamunyu instead lowered the window of his car and shot him at close range.

Akena died a few hours later at Norvic hospital along Bombo road where he was rushed for emergency treatment by Kanyamunyu and his Burundian girlfriend Cynthia Munwangari. Kanyamunyu has been facing trial for the last four years, together with his girlfriend Munwangari and elder brother Joseph Kanyamunyu who allegedly hid the killer gun. They have all for the past four years pleaded not guilty to the offence.

But in a twist of events, a seemingly remorseful Kanyamunyu confessed to committing the crime before the religious and cultural chiefs on Saturday. He confessed during a rigorous interrogation by a select council of elders who administer Mato-Oput. His remorseful confession earned him a penalty of 10 cows and three goats to facilitate the traditional justice process.

A close relative of Akena's family who preferred anonymity, disclosed that after Kanyamunyu confessed and paid the requisite reparation, the clan chiefs agreed to forgive him - a process to be confirmed and sealed by Mato-Oput.

“The negotiations ended very successfully and we are now consulting on an appropriate date yet to be agreed upon this week for the families to publicly and officially reconcile their differences,” the family source said.

The two animals are cut into halves and exchanged by the two clans. The two antagonists then kneel down opposite each other with their arms folded at their backs and they bend without touching the ground to drink a bitter solution made from Oput tree in a calabash. The drinking of the bitter herb, mixed with the lamb's blood, means that the two conflicting parties accept "the bitterness of the past and promise never to taste such bitterness again."

They conduct the Mato-Oput ceremony because they believe that after the ceremony the "hearts of the offender and the offended will be free from holding any grudge between them bringing true healing in a way that formal justice system cannot."

The process, according to literature, doesn't aim at establishing whether an individual is guilty or not, but to restore marred social harmony in the affected community. But news of the negotiation has evoked mixed reactions from across the divide. Members of the public are particularly suspicious about the events unfolding.

Samuel Odonga Otto, the Aruu County MP who was at the helm of mobilizing the public to demand justice for Akena criticized the deceased's family for accepting to be manipulated.

"They involved me in the beginning but along the way they sidelined me. I don't even want to comment any more on the matter, let them handle it," Odonga said.

Tonny Kitara, a Gulu-based lawyer observed that Kanyamunyu must have sensed danger in the case and advised to change strategy.

"If I were his lawyer, I would do the same thing to find closure to the case and restore sanity," says Kirara.

Walter Okidi Ladwar, another lawyer observes that the exercise has been vastly misinterpreted by people who do not know anything about the laws of the country and how the formal court system works.

"Traditional justice system is parallel to the formal court, the two are not the same although what happened at the Acholi chiefdom has been done in the absence of guiding transitional justice law, yet to be enacted," he said.

Henry Komakech Kilama, an activist asserts that the gesture taken by Kanyamunyu and his legal team is commendable but remained sceptical.

"His confession was long overdue and he may not come out of it clean although it may fetch him a plea bargain in court."

Ambrose Olaa, the prime minister of Acholi Cultural Institution noted that there shouldn't be any cause for alarm since the initiative is not new and was undertaken with the full participation of the two families. He said the traditional justice system does not interfere with the criminal prosecution process already ongoing in court.

Mathew #Kanyamunyu, the prime suspect in the #AkenaShooting says he still can't comprehend "the stupidity, the foolishness, the evil that he exhibited"on November 12, 2016, when shot at Akena at close range after he accidentally 'scratched' his car at Lugogo 🎥 courtesy pic.twitter.com/9fx4ovBsXa

What we do not know even after this ' confession ' is who pushed to take Akena to hospital. i.e. is Cynthia a sociopath or is it totally Matthew.

Matthew's family must surely realize that if they raised a sociopath who will kill a stranger over a minor incident. They are more at risk. of Matthew
Quote | Report to administrator
12
Refresh comments list
RSS feed for comments to this post
Add comment