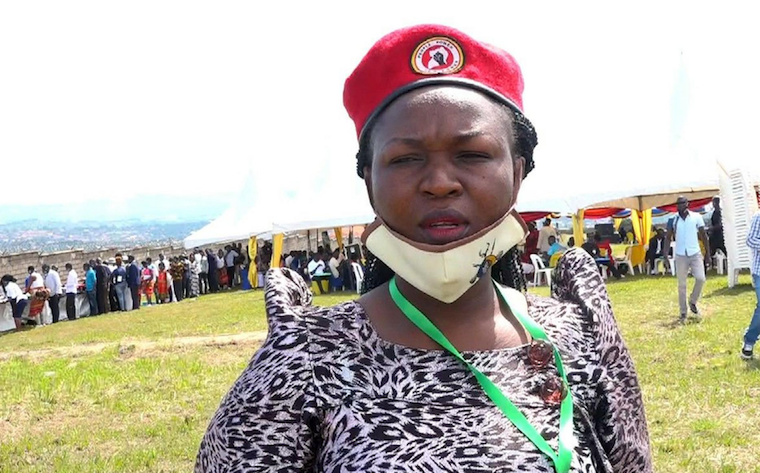 Kyebakutika was arrested while addressing the media soon after attending the Kyabazinga's coronation anniversary at Igenge palace in Jinja on Sunday. Police officers led by the officer in charge of Jinja central police station, Moses Kamomo surrounded her, grabbed the red beret off her head and forced journalists to switch off their cameras as she was being whisked away to a waiting police patrol vehicle within the palace compound.

Kyebakutika attempted to resist the arrest, arguing that her National Resistance Movement (NRM) counterparts had been left to wear party colours undisturbed and there was no reason to block her from doing the same.

"I saw other politicians wearing yellow masks and other party outfits but I am surprised that police is arresting me over putting on my red beret during this media interview, it's really unfortunate," she cried out to no avail.

Kiira region police spokesperson, Abbey Ngako confirmed that Kyebakutika is currently detained at Jinja central police station but declined to divulge further details. Last year, government gazetted the red beret as part of the official army attire and members of the public were banned from wearing them.

The decision, however, raised controversy among the People Power pressure group supporter led by Kyadondo East legislator and presidential hopeful, Robert Kyagulanyi who continued to wear red berets during their different mobilization campaigns throughout the country.

To date, NUP leaders continue to wear red berets during press conferences and other public events despite the said ban.

+2 #1 Larry mike 2020-09-14 09:57
A country full of cowards wearing police and army uniforms. The have no idea what patriotism and national service entails.

How does a red baret worn in public threaten the establishment? We have so-called civilians wearing army drab (green) uniforms simply because they've been indoctrinated at kyankwanzi. Those are the threats to this country. How can you fear democratic competition and call yourselves legit?
Quote | Report to administrator
0 #2 PaulK 2020-09-15 08:29
I hope they did not take her to one of their toture chambers/Nazi like death camps.