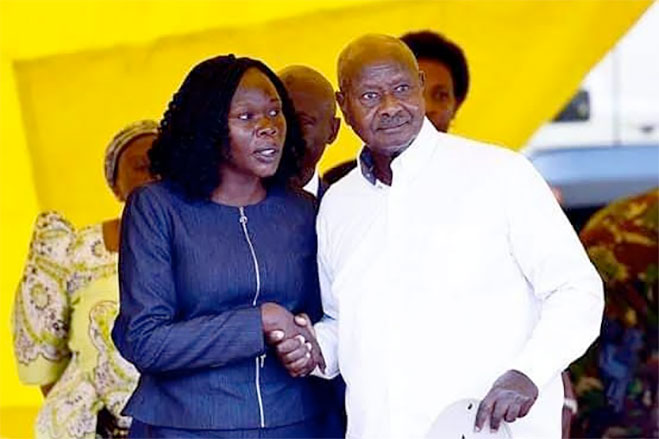 Interviewed last Friday, the minister of state for Finance in charge of Investment laid the blame for her loss on many things; Opposition interference and a presidential order that allowed everyone with a national identity card to vote. She told her interviewer, NBS’ Joseph Sabiiti, that People Power supporters, non-residents from South Sudan and DR Congo all voted against her.

How do you take the outcome of this election?

I take it with mixed reactions; it is a big loss for NRM and a big win for the opposition. It is just giving birth to opposition in Koboko, which is largely an NRM area.

This was an internal election in the NRM; how does the opposition come in?

From the word go, we made it very clear that my opponent is not NRM because his campaign managers were all FDC. Opposition was supporting him. They brought hooliganism in the NRM election, which has never been the case in Koboko.

People Power agents ferried from Arua entered the line by force and without registering anywhere, they were allowed to vote just because the chairman of the party [President Museveni] said that anyone who has a national ID should vote.

Secondly, people from FDC within the municipality and also those ferried from Yumbe were also allowed to vote. For me it was not a loss for Anite but a sad moment for my party.

My agents told me non-residents and children were in the line, the village committee was not allowed to do their work as the chairman of the party would have expected. The person who was giving orders was the District Police Commander (DPC) who instructed that everyone with a national ID should vote and this happened in five villages.

Are you going to swing the thousands of votes that you got in this election behind Dr Charles Ayume?

I have talked to my supporters and they do not want to support Ayume, they think he is not their choice. When I asked them what we should do, they told me they want to write a letter to the president with three resolutions.

The first one is; they want a re-run of the election with a clear voters’ register because they have never seen where the voters’ register is made…children made to vote, non-residents all the way from South Sudan and DR Congo coming to vote in their villages.

In the event that this does not change, are you thinking about running as an independent candidate in Koboko municipality?

I am a strong and ardent supporter of NRM. I support NRM because of the founding father of the party who has taught me so many values and among those is not to look at politics as a career. I do not take politics as a do-or-die and because of that I will take the people’s voices to the president and whatever he tells me to do is what I will do.

You said you are the gateway to Koboko and you have placed a padlock there, how then did all the things you are talking about happen?

You know the story of the thief or a robber; they can actually break the gate. It, therefore, should not surprise anyone that even when I am the gateway, the gate was broken, the robbers jumped over the fence, dented the padlock and they robbed us but they did not kill us.

I say that because my supporters are the genuine NRMs and they strongly say that they were robbed. That does not mean the gate was broken completely, I am still the gateway. I am NRM and I will continue mobilizing for NRM particularly for President Museveni because I believe that he is not to blame for the letter he signed on September 2.  He wrote the letter in good faith because he thought that the party structure at the grassroots is very strong which is true.

A lot of people are asking what happened to the “Majje” and why are you crying now.Are you seeing tears in my eyes?

I do not cry because I am an experienced leader. I became a member of parliament at the age of 24 and a Minister at 27. I am only 35 years and I surpass by far so many haters out there. You might think that you have won and I have lost; I have lost the battle but the war is still on.

People have described you as someone who is arrogant and too loud...

People should not interpret my confidence and knowledge as arrogance. They are used to barking at you and you put down your head, I never put down my head. You bark at me, I bark at you. I am not that character who says if you go low, I go high. No, I follow you there and I squeeze you. They won the battle but not the war and let us wait and see if President Museveni will lose.

Isn’t leadership about working with everyone because not everyone in Koboko supports the NRM?

Dr Ayume dares you for a second round. Come as an independent and he will beat you again.

Dr Ayume is not himself. He is in the slumber of thinking that his father is everything and he runs by his legacy. I am a self-made politician and self-made politicians do not bicker or cry. I am in politics for service, not as a career. I am very young, energetic, focused; so, there is no need for me to worry.

You said you do not see Dr Ayume father’s legacy...

He left a foundation, that is the legacy but what has Charles done with that foundation? He has worked in State House for 15 years but go and check in the village if he has built a house.

I find it funny that this "beauty" who is suspected to be a foreigner from accross the boarder is now accusing her relatives of jumping the wall and denting locks.

She seems to be under the illusion that she become Minister at 27 because she is special and that Museveni somehow cares a bit about her.

She forgets how she was scripted into the act .

Was Rambo is real soldier ? .

Why didnt her "majje" blocked the South Sudanese and Congolese from crossing to Koboko to vote for Dr.Ayume ?

I find it funny that this "beauty" who is suspected to be a foreigner from accross the boarder is now accusing her relatives of jumping the wall and denting locks.

She seems to be under the illusion that she become Minister at 27 because she is special and that Museveni somehow cares a bit about her.

She forgets how she was scripted into the act .

Was Rambo is real soldier ? .

True. Anite is from DRC; she is not a true Ugandan.

This partially explains why Uganda has never had true leadership , We do not even know where some of these thugs come from. They just show up !!!

In Idd Amin`s army there used to be a man called Col. Toroko , He was so notoriously homicidal , Amin decided to deport him back into the jungles of Garamba.

They were other aliens like Juma Butabika, and Mariyamungu whose only qualification was their brutarity. They both went back to DRC and died there.

This Anite comes from the same place , That is why she has zero remorse in her systems . Like her causins , she is a biting dog that acts on instructions. of the master.

Because I am kind , I keep reminding her that she should not flatter herself and imagine that she is part of Museveni`s flaternity.
Abiriga found that out the hard way.
Report to administrator
12