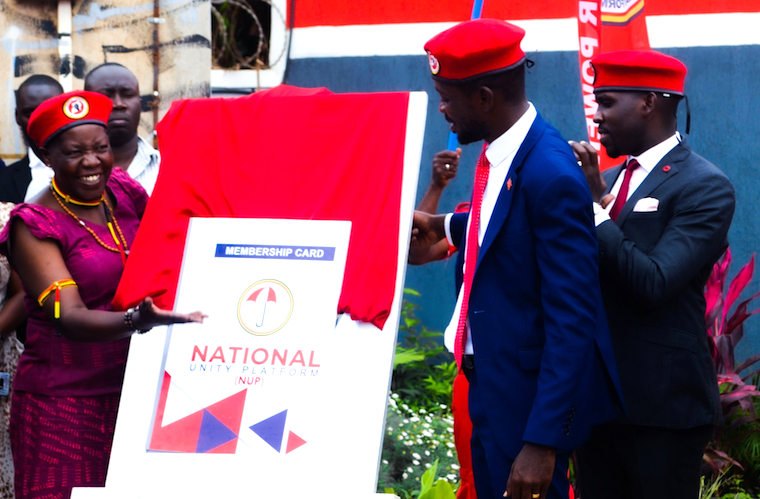 The Electoral Commission has advised the National Unity Platform (NUP) to desist from using the red as part of their party colours.

Deputy EC spokesperson Paul Bukenya says the red colour is already registered in their system as belonging to the Uganda People's Congress (UPC). Bukenya said they are not restricting NUP individuals on what to wear but rather cautioning the party as an entity. NUP spokesperson Joel Ssenyonyi said they are yet to receive any communication from the Electoral Commission. He said, however, their party constitution, a copy which the Electoral Commission has registered three colours - red, white and blue.

Last month, Kyadondo East MP Robert Kyagulanyi Ssentamu aka Bobi Wine surprised the nation including members of his own People Power movement when he unveiled the National Unity Platform as the political wing of the People Power.

Although Kyagulanyi initially dismissed off the relevance of political parties saying they were already too many and had for years failed to dislodge President Yoweri Museveni from power, critics and allies alike have been mulling over how the People Power leader managed to pull off such a secret political masterstroke after he secretly bought off Moses Nkonge Kibalama’s party, the National Unity, Reconciliation and Development Party. Moreover, Kibalama is a known longtime state ally.

It was Kibalama’s party that whose name was transformed into NUP and Kyagulanyi elected as its leader and presidential flag bearer. Kyagulanyi would later boast that the registration of the new political was a masterstroke that surprised even the state intelligence and led to the sacking of eight senior Electoral Commission officials. Electoral Commission chairperson justice Simon Byabakama however later said the officials resigned voluntarily.

At the unveiling of NUP, Kyagulanyi said they would have loved to register People Power as a political party but the state panicked at registered it as an NGO looking after the elderly.

Both Nambeshe and Nsamba were elected on the ruling National Resistance Movement (NRM) party ticket while Kalwanga, Ssebagala and Zaake were elected as independents in 2016.

While welcoming the new members, Kyagulanyi said it is high time all Ugandans who feel dissatisfied with the leadership of President Museveni to join them. Kyagulanyi said the legislators had taken a wise decision to join his National Unity Platform.

"Today ladies and gentlemen is a great day. Today is a day when we receive noble Ugandans who have taken a fundamental decision to stand and identify clearly and firmly as the People Power movement but most importantly as the National Unity Platform. We’re pleased to know that these ladies and gentlemen are actually confident about identifying with us. These people are people that I personally hold in very high regard. These are people that have been steadfast, they have been consistent and they continue to be consistent," said Kyagulanyi.

The vocal Nambeshe assured the NUP members of his total commitment and support from his Bugisu region.

"I would like to make my total commitment to the National Unity Party and to you our principal and to you the membership of NUP and assure you of full support of not only eastern, but particularly Manjiya. Manjiya, I must appreciate you right from here, the headquarters of NUP because you’re the people who brought me up but the entire sub-region of Bugisu. To you members who have not known, we have aggressively been reaching out to them and they are behind People Power and now NUP which is the vehicle which is going to drive this movement right from this unveiling. I can assure you we have a lot of moral support particularly from the sub-region of Bugisu." said Nambeshe.
Nsamba says that he believes in change and transition and decided to join NUP because he believes Kyagulanyi will defeat the incumbent president.

Electoral Commission is ensuring Museveni's post by confusion & locking Ugandans in subject that waste time, while the real issue "UNITED action" to ensure Museveni is out before next fake election, is left out!

Bobi Wine must become that just one National Leader & UNITE Ugandans to block Museveni & show him way out!

Then, Bobi Wine will have to lead Ugandans to real election within months so that he is elected or rejected!

Bobi Wine is a chance, yet he still has to understand it & bring Ugandans TOGETHER for second Independence, without giving chance to war that will only kill & destroy Ugandans!

I wouldn't be surprised if Wainaichi is Museveni, his wife, son or a rwandese fighting to have their second country!

Why haven't Ugandans, especially tribal leaders, not understood it's bringing down the tribalistic system that is blocking UNITY against Museveni?

Museveni is not eternal, right?

So, what will Ugandans do when he dies?

Or are Ugandans alright with Museveni's family business just continuing after him?
Report to administrator
+1 #13 Wooden K. 2020-08-04 21:19
Lysol ,
UPC has not been compromised by Akena ; through his very corrupt wife ,this son has SOLD UPC to the man who destroyed his father .

Plus , UPC does no longer exist . What is left , and what keeps some of those UPC thugs around is the money that is generated from Uganda House.
Report to administrator
+1 #14 Wooden K. 2020-08-04 21:42
And.... talking about Uganda House brings me to another point :

When Obote fought with Ssekabaka Mutesa , Obote did not only order his army to take over all Buganda`s property , he arrested and imprisoned all members of Mutesa`s family including women who had nothing to do with the fight.

Obote did not stop at that ,he made sure that all members of the Royal Family were financially suffocated wherever they were.

But When Obote fell , we the Baganda never asked the incoming governments to "nationalize" Uganda House or Obote`s family property . We left them alone to learn from their hatred.

Ironically ,Akena seems to have forgotten that it was Museveni who made sure that Obote gets humiliated and denied any kind of respect while he was alive.