The Observer
Log in
Updated today
Most Popular:
10 - I’m told I look like Sheebah!
9 - Sex Talk: It can’t always be your way or the highway
8 - FDC's Amuriat arrested in Mbarara, released on bail
7 - Sweden closes schools to stem COVID-19 infections
6 - Lukwago discharged in Nairobi as two faint over false rumours of his demise
5 - Muzaata: Mourners heckle, block minister Kanyike from addressing them
4 - Amuriat pledges to protect Banyankole after Museveni fall
3 - Muntu survives motor accident in Lamwo
2 - Bobi Wine: Museveni has nothing new to offer Ugandans
1 - Sheikh Muzaata dies at IHK 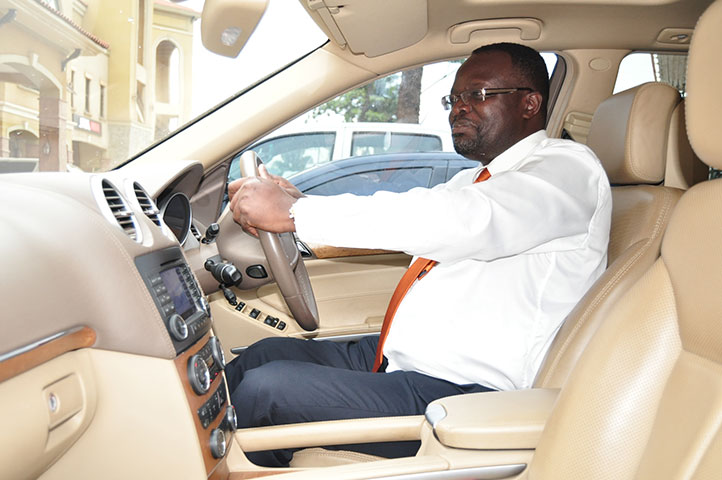 Prof Baryamureeba inside the killer vehicle

Former Makerere University vice chancellor and 2016 presidential candidate, Prof Venansius Baryamureeba has been arrested over knocking a woman dead in Muyenga.
The fatal accident happened today at 1 pm around the Kibuli-Muyenga junction, Makindye division, Kampala. Police said the deceased was identified by people who knew her as Mariam Jagenda. Her body was taken to Mulago City Mortuary for postmortem.
Deputy Kampala Metropolitan police spokesperson, Luke Owoyesigyire, said Baryamureeba is being detained at Kabalagala police station.
Owoyesigyire added that Baryamureeba was driving a vehicle with a personalised number plate, 'U' when he rammed into two women killing one on spot.

"Kabalagala police station are investigating a fatal accident that has claimed the life of one person. The vehicle registration number "U" being driven by Prof Baryamureeba knocked two female pedestrians and a perimeter wall, killing one person on spot," said Owoyesigyire.

"The second victim Mariam Namusoke is still admitted at Mulago hospital. The suspect Prof Baryamureeba is detained at Kabalagala police station as investigations into the cause of the accident are underway," said Owoyesigyire.

Police have parked the killer vehicle at police yard pending inspector of vehicles to examine it. Police suspect Baryamureeba could have been overspeeding at the time when he knocked down the two women.

In a 2015 interview with The Observer, Baryamureeba said he chose that particular vehicle, the Mercedes Benz GL 500, model 2007 because of its safety.
He said in the interview then that in 1996, while in Bergen, Norway, for studies, he was involved in a motor accident that almost took his life, and this incident completely changed his outlook on vehicles.

“After that mishap, I made up my mind that in addition to health insurance, I am always going to insure my life by using a car with guaranteed safety,” said Baryamureeba.

The Mercedes Benz GL 500 is a three-row-seater luxury SUV. Its exterior design is more passive than many of the other vehicles in her class. The GL wears a mix of soft curves and long creases, giving it the attractive qualities of a crossover, but with a gloss that is decidedly rugged-looking.

“It is a car with many safety features and comfort. For instance, it doesn’t get off the road or overturn, even when the tyres burst or it is involved in a head-on collision with a trailer,” he said.

+1 #1 Nalongo Mutiima 2020-07-02 08:57
Baryamureeba is an impulsive man. You remember when he used to be comical during the campaigns that he was going to be President of Uganda.

Rest in peace Mariam Jagenda as the Baryamureebas cruise in posh cars guaranteeing their own safety but not the poor pedestrians.
Report to administrator
0 #2 WADADA rogers 2020-07-02 10:30
“After that mishap, I made up my mind that in addition to health insurance, I am always going to insure my life by using a car with guaranteed safety,” said Baryamureeba.

That is a good plan I hope he has a valid permit as well and he was not drunk, soon he will be out as a free man
Report to administrator
+1 #3 Lysol 2020-07-02 19:27
This seems to be a pure case of DUI. It doesn't matter whatever kind of vehicle one drives; accident can happen while driving intoxicated.

That vehicle is over ten years old on the road and should have wear and tear and the check engine light on by now. The police should have performed a soberity test on him.
Report to administrator