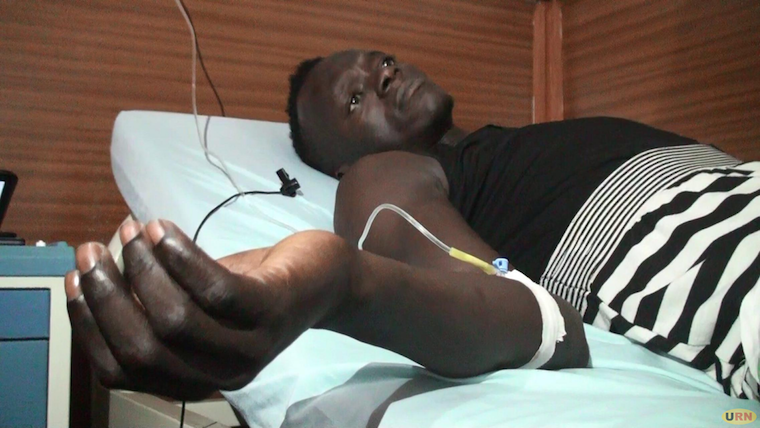 A Kyambogo University student has been hospitalised after his Chinese boss at Global Paper Ltd allegedly kicked his manhood last week.
Peter Waiswa, a second-year student of Development Studies at Kyambogo is currently admitted at CPR Medical Center in Mukono town after being assaulted by the head of the Plywood department at Global only identified as Liu.

Waiswa secured employment at Global Paper in Mbalala, Mukono after education institutions were closed down due to the Covid-19 lockdown. According to Waiswa, he decided to work to raise some money for tuition and support his single mother to care for his nine siblings.

Waiswa was admitted at CPR on Monday after developing abdominal pains, which affected his movement. He explains that Liu kicked his manhood without any explanation as he was picking plywood offcuts from the warehouse.
He says he's feeling a lot of abdominal pains and is now worried about being discharged from the hospital without stabilising due to the high medical cost involved. His medical bill has since accumulated to Shs 400,000.

Edward Sseggane, a clinical officer at CPR says Waiswa arrived at the facility in severe pain because of the severe injury in his private parts.

"We didn’t consider money first since the patient was badly off. The patient couldn’t move well due to the fact that he has been severely injured around the private parts. We have been monitoring the patient from day one." Sseggane said.

Bonny Opendi, the human resource manager at Global Paper declined to comment on the matter and referred our reporter to Mukono police station. Ismael Kifudde, the officer in charge of Mukono police said investigations are ongoing to establish what could have happened exactly.

He notes that they secured video footage for review before taking any action. Waiswa’s mother, Jessica Nabirye, says her son has been working hard to contribute towards his tuition and support his siblings.

They will Castrate you!! But For A Poor Ugandan !! He will NEVER Become a Man Again...Stand Up to stop this Nonsense!!
Report to administrator
0 #2 Amooti Mugi 2020-06-29 21:40
If that student attempted to steal company property or money, I have no sympathy.... but if he was kicked out of sheer racism , then " an eye for an eye "for the Chinese man can impart sanity
Report to administrator
0 #3 WADADA rogers 2020-06-29 22:32
A Jet Lee or Jackie Chan kick, either way, Waiswa did not deserve to be beaten.

With or without an explanation, no employer is supposed to mistreat employees.

The Chinese should be pushed to meet all the medical bills and to compensate Waiswa for all the time he will be off duty. That aside, I think it is high time the Government woke up from their sleep, such actions must be condemned and those found guilty should be fined about 10000USD.
Report to administrator
0 #4 Lysol 2020-06-30 05:38
Sometimes, racism is even worst coming from the non-whites.

On similar note, our police always use similar tactics of balls cracking by applying wedgies, when making arrests, which can lead to impotence.
Report to administrator
+1 #5 Lakwena 2020-06-30 14:38
In other words, these are Mr. M7's darlings and investors (gods) for Ugandans to worship. It is like another man kicks your balls in your own house.

As if it is not enough for the Chinese to have brought the world to its knees (in less than 5 months) because of the Covid 19, they have to kick Ugandans balls too. Eish!

As we agonize under the Covid 19, the Chinese already have up their sleeves another deadly pigs virus (Pandemic) to dispense to the world.