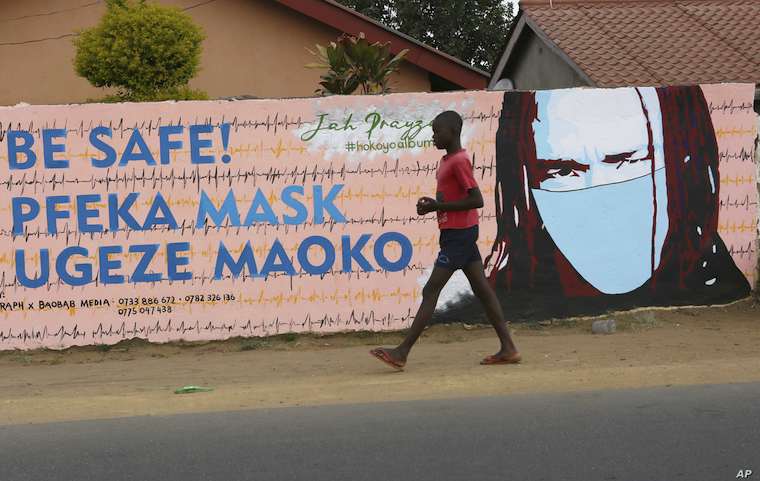 More than 400 Malawian migrant workers who returned from South Africa have escaped from a coronavirus screening camp in the economic capital, Blantyre. Test results released Wednesday night were positive for 46 of the escapees while nearly 300 had yet to be tested.

The situation raised fears that the virus could quickly spread in Malawi, which has so far confirmed 101 infections and four deaths.

Social media videos showed tens of Malawians jumping over fences at the screening camp at Blantyre’s Kamuzu Stadium on Wednesday morning while police watched. Malawian police said the returnees complained of a lack of toilets and bathrooms in the stadium, then began forcing their way out on Tuesday.

Police Service spokesperson James Kadadzera said by messaging application from the capital, Lilongwe, "We were told that most of the returnees wanted to go home due to lack of necessary social amenities. Some were actually seen forcing their way out. And, as the police, we did our part to make sure that we contained the situation.”

Another 300 escapees from the screening camp have yet to be tested, raising fears the virus could spread further in Malawi, a country with one of the weakest health care systems in A

Health officials sought to downplay those concerns. Gift Kawalazira, head of preventive health services at Blantyre District Health Office, said at a news conference Wednesday that authorities would easily trace the escapees because they had have their contact details.

"We must admit it was a system failure," Kawalazira said. "But people can take solace in the fact that what was happening was in open air. Kamuzu Stadium is an open-air [facility]. so the chances of air circulation and what have you, the chances of you contracting the disease, are quite minimal as compared to if you are sitting in a bus or if you are in an enclosed space.”

Kawalazira said authorities have since beefed up security at other screening camps to prevent further escapes of those being screened for the virus. But questions are being raised about how seriously authorities are taking the pandemic after reports that some of those being held bribed police into letting them leave.

“We got wind of the same," Kadadzera said. "So our officers are on ground investigating. But let me assure you that we, as police service, it’s our duty to make sure that we are taking a role in protecting further spread of this deadly disease.”

Meanwhile, authorities announced Thursday that nearly 600 more Malawians were expected to return home from South Africa over the weekend. Two hundred of them are expected to arrive by military helicopters in Lilongwe, while the others will arrive by bus.