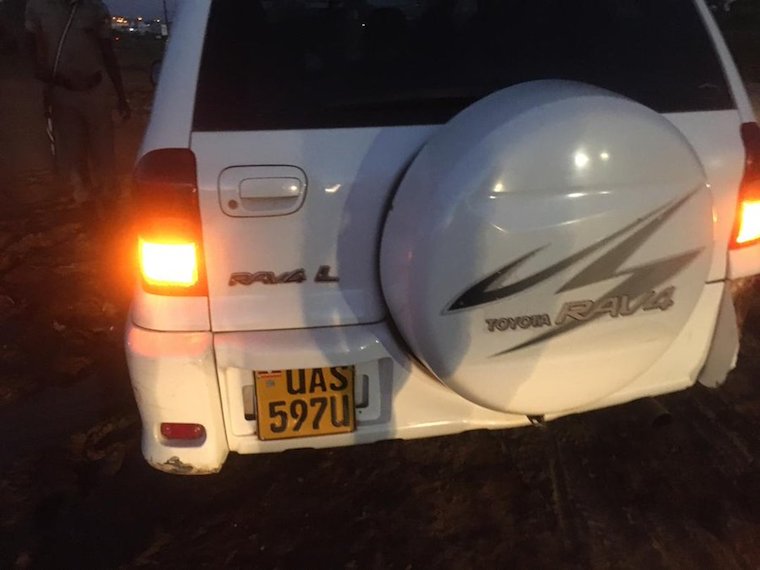 A High court judge was behind the steering of a Toyota Rav4 registration number UAS 597U that allegedly knocked and caused the death of traffic police constable Innocent Ayesigye in Seeta.
Ayesigye succumbed to accident injuries on Tuesday morning at Rubaga hospital. The police leadership had transferred him from Mulago hospital where he was taken on Sunday evening minutes after he had been knocked at Namanve along Jinja road.

Closed Circuit Television (CCTV) footage released by police and a picture taken by an onlooker on Sunday evening showed occupants in the Rav4 guarded by a police officer in a khaki police uniform driving off the scene as Ayesigye struggled for life on the ground.

Ayesigye was attached to Seeta police station, and at the time of the accident, he was riding a police motorcycle UP 2164 Jiansey white in colour.

“He was rammed into by the driver of motor vehicle UAS 597U white in colour from behind, throwing him into an oncoming motor vehicle UBG 896E blue in colour," Kampala Metropolitan Police deputy spokesperson Luke Owoyesigyire said.

Police shared the picture of the Toyota Rav4 on its social media platforms urging the public to help identify the owner. Patrick Onyango, the Kampala Metropolitan Police spokesperson earlier on said that the two occupants of the vehicles had appeared at Seeta police station.

“The driver of this car Reg. No. UAS 597U & his co-driver have reported themselves to Seeta police station. They knocked our traffic officer Ayesigye Innocent on Sunday evening at Namanve and didn't stop... We are charging them with three counts; reckless driving, causing death through reckless driving and failing to report an accident,” Onyango said.

Sources revealed that the judge appeared at police headquarters on Wednesday afternoon where a meeting on how to resolve matters surrounding Ayesigye’s death shall be handled.

According to sources, the suspect [name withheld] is a resident judge in eastern Uganda. Details of what has been resolved between police leadership and the judicial officer were still scanty by press time.

However, details obtained by police from Uganda Revenue Authority (URA) show the vehicle, UAS 597U is registered in the name of Charity Kamugisha, a staff of World Vision Uganda

Ayesigye, after being knocked staggered into a Ford Motor vehicle which is currently parked at Bweyogerere police station. It was being chauffeured by Robert Ntambi, a resident of Bweyogerere division, Kira Municipality, Wakiso district.

0 #1 P. Goldberg 2020-05-28 01:32
There is a tendency in Uganda that when one is in a position like MP, Generals in the Military, High level Police officers and Sadly judges, you are above the law.

We see government registered SUV’s violation traffic rules everyday. Why can’t he stop and rush the injured to the nearest medical facility-the so call judge.
Report to administrator
+2 #2 WADADA rogers 2020-05-28 08:44
i hear Sources revealed that the judge appeared at police headquarters on Wednesday afternoon where a meeting on how to resolve matters surrounding Ayesigye’s death shall be handled.

According to sources, the suspect [name withheld] is a resident judge in eastern Uganda. Details of what has been resolved between police leadership and the judicial officer were still scanty by press time.

What is there to resolve apart from taking the Judge to Court, i thought justice does not work selectively
Report to administrator
0 #3 WADADA rogers 2020-05-28 08:53
I know that judge, his duty station is Mbale and is a Munyankole
Report to administrator
0 #4 WADADA rogers 2020-05-28 09:23
Now what are we supposed to believe, was it a High Court Judge or a Chief Magistrate as other papers have said.

I actually dont know why your paper is hiding the name, we shall know the judicial officer by name before close of business today
Report to administrator