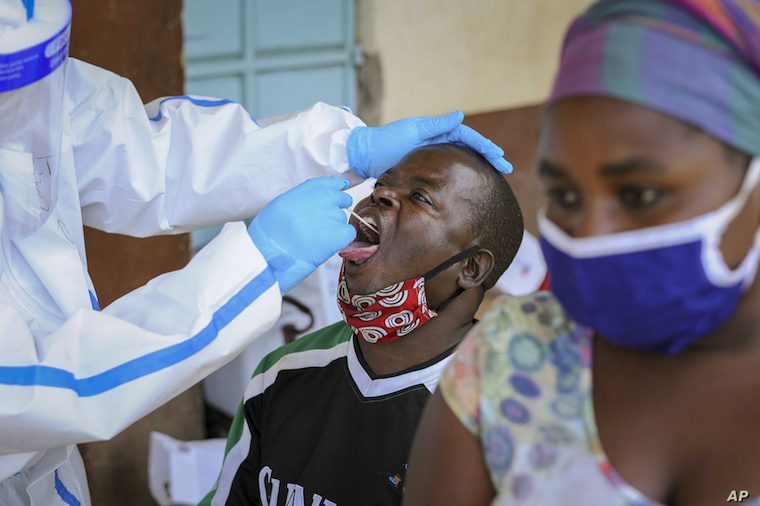 A health worker taking a swab sample from a suspected patient

The new cases were confirmed from the 1,189 samples tested on Monday, May 25. Nine of those cases are truck drivers, while one is a contact to a previously confirmed positive driver. The 30 foreign cargo drivers who tested positive were denied entry.

On Monday, Kenya announced 72 new infections from the 2,722 samples tested which included 70 Kenyan nationals, one Somali and one Ugandan. The acting director-general ministry of Health Kenya, Dr Patrick Amoth revealed that so far, 34 Kenyan medics have tested positive for COVID-19.

Kagwe announced that Kenya had stopped importing PPEs and had resorted to locally manufactured products that he said were superior in quality.

Kenya also recorded one more death to increase the number of coronavirus related deaths to 52. Another 9 patients recovered from the disease, increasing the number of recoveries to 402 cases.

Rwanda registered 9 new cases from the 892 samples tested to take its national tally to 336. The number of recovered patients increased to 238 after one more patient recovered from the disease. There have been no updates from Tanzania and South Sudan and their confirmed cases still stand at 509 and 655 respectively.

Meanwhile, South Africa lost 52 people and had 1,032 new infections on Monday. In Egypt, there 19 deaths as well as 702 new infections. In Algeria, there were 9 new deaths and 197 new cases.

In Somalia there were 5 new deaths and 95 new infections. Mayotte recorded 72 new cases while Guinea Bissau registered 64 new cases and one new death.

0 #1 WADADA rogers 2020-05-26 12:59
This usually happens a day before the date on which the President is expected to address the nation or a day before the last day of a given period of lock down, its difficult to know whether i t is a game or a money making stunt
Report to administrator
0 #2 Wabuyi Denis 2020-05-26 13:19
This article has honestly been written in horrendous English. You need to make me a proof reader!
Report to administrator