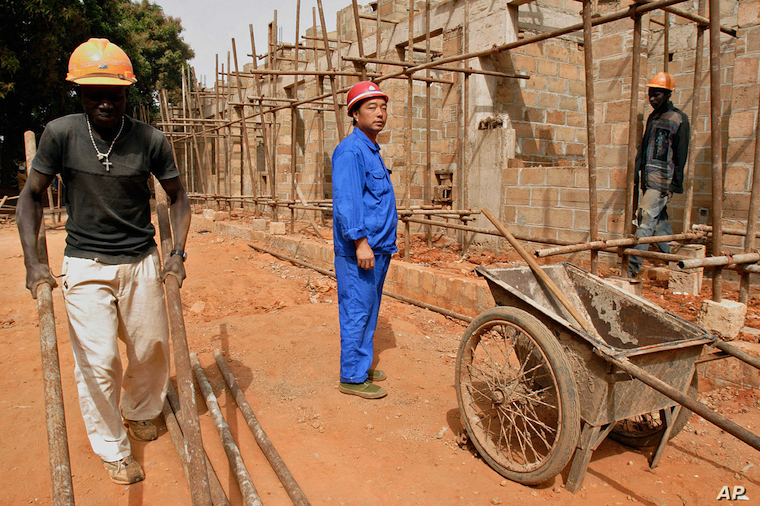 FILE - A Chinese foreman looks on as laborers work on the construction of military officers housing, donated by China, in Bissau, Guinea-Bissau

A new report is warning that China may be spying on African government officials from within their own buildings.

These buildings include residences for heads of state, parliamentary offices, and police or military headquarters. The author of the report, Joshua Meservey, senior policy analyst for Africa at the Heritage Foundation, said the research does not prove there is spying going on at these buildings, but he believes the possibility should be explored.

During a May 22 news conference, Chinese Foreign Ministry spokesperson Zhao Lijian strongly denounced the report, saying it was filled with “lies, illusions and ideological bias.”

“We urge [a] certain think tank in the U.S. to spend more time and energy on assisting Africa with real actions instead of spreading lies,” Lijian said, according to the official transcript of his remarks.

“The African people have a fair judgment. Attempts to drive a wedge between the friendly partners of China and Africa will only lead to self-inflicted humiliation.”

Meservey said the idea for the report came from the 2018 accusation that China had installed listening devices in the African Union (AU) headquarters in Addis Ababa, Ethiopia. The findings, first published by the French newspaper Le Monde, alleged that servers in the AU headquarters were secretly sending data to a computer system in Shanghai each night between midnight and 2 a.m.

“The computer systems were delivered turnkey,” Le Monde wrote in 2018. “And Chinese engineers have deliberately left two flaws: backdoors, which give discrete access to all internal exchanges and productions of the organization.”

AU and Chinese officials denied the report by Le Monde. Kuang Weilin, China’s ambassador to the AU, called the charges absurd and said they were designed to undermine Sino-African relations.

But Meservey believes the AU spying may be just the tip of the iceberg. He said China’s motives for investing so heavily in building infrastructure for African governments is suspect because these projects generally are not profitable.

“For decades, a central element of China’s international diplomatic efforts has been cultivating strong relationships with senior African officials and giving them glitzy, brand-new government buildings,” Meservey said. “It is clearly a way of building favour with these governments. … These are designed as pieces of political influence.”

His report found that Chinese companies had built at least 24 African presidential or prime ministerial palaces, residences or offices and at least 26 parliaments or parliamentary offices.

Meservey said China might be looking to pick up information from third-party countries such as the US when its diplomats visit African countries. He said it might be interested in gathering financial data on African countries for future investments and gaining the upper hand in loan negotiations. China also may be looking to gather useful, personal information about African leaders.

“It’s possible to gather information on specific leaders, learn about their habits, their predilections, their financial situation,” he said. “Things that you could use to manipulate them or even to recruit them as an asset either through blackmail or just knowing how to tailor your pitch to them.”

It's time Africans look at China as 'enemy n° 1 of the continent & its natural riches'!

It took USA & Europe time to stop China's quest for control of the world & Africa without real leadership is now the goal & China luers us into its grip through development projects that it controls!

China has to feed its +1.4 billion people & will stop at nothing to get what it wants & Africans must wake up as Americans/Europeans did!

This, for Africa, begins by ensuring good governance & working as one people to protect/control manage natural resources!

As it is, China & Museveni will own Uganda & land riches while powerless tribally divided ruled Ugandans wait for Museveni to finally serve them, which will never happen!
Report to administrator
+1 #3 Lysol 2020-05-24 18:02
This should serve as a warning to those desperate corrupt African leaders.

But they can't learn. They will always sell their souls to the devil in order to hold onto power for life.
Report to administrator
+1 #4 Ugthinker 2020-05-24 22:03
It’s too late for our good for nothing rulers, who have premised Africa’s continuity on the good will of its competitors!

Africans have a choice of either turning tables for non reforming rulers or brace themselves for the worst colonial round.
Report to administrator
+2 #5 Concerned Ugandan 2020-05-25 13:42
China's foreign policy regarding Africa has and always will be one of maximum exploitation in its own best interests. In this they are no different from the West except that the Chinese are a lot more obvious and crude in terms of corrupting African leaders.

China obviously has a significant intelligence footprint in Africa mostly because they do not want to lose out to the West in terms of ensuring they have almost exclusive rights to bleed Africa dry in their own xenophobic interest!
Report to administrator
0 #6 Batty 2020-05-25 17:49
Thats what china does, that is how they are going to try and take over. It is done everywhere, they are nothing short of global terrorists.

Look at the coverups in the Coronavirus breakout. They set it up to look like a fluke virus. Use your heads people, CHINA IS EVERYONES ENEMY, EVERYONE.

China obviously has a significant intelligence footprint in Africa mostly because they do not want to lose out to the West in terms of ensuring they have almost exclusive rights to bleed Africa dry in their own xenophobic interest!

The Africans, if they still have capacity to think, should have learnt by now, that the Western Countries are better partners because;

1.They demand accountability for the money granted/ loaned so that the lowest peasants benefit.

2. They have continued to support most budgets of African countries

3. They insist on respect of human rights
4. Projects done by Western companies are very durable etc

Africans should have learnt a lesson from China's handling of the flu pandemic that has turned all world economies belly up.
Good luck.
Report to administrator