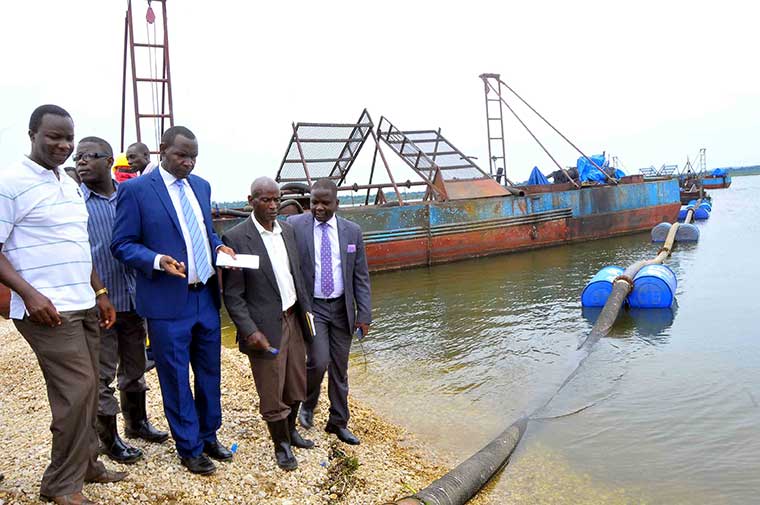 Court has awarded Shs 181 billion to a company dealing in sand mining and fish farming whose licence was cancelled by government in 2016.

DMW Uganda Limited, owned by pastor Daniel Walugembe in 2019 petitioned the civil division of the High court challenging the directive by parliament in October 2016 to ban their activities of sand mining in Lwera wetland.

The parliamentary committee on natural resources called for the cancellation of the licence following complaints by locals and area politicians that several companies were engaged in illegal sand mining and export especially by the foreign companies.

In the aftermath, the committee directed the National Environmental Management Authority (NEMA) to also cancel licenses of the companies within three weeks for those that didn't have the approval on environmental impact assessment reports among others.

As a result, DMW also lost its licenses for sand mining and fish farming on 69 and 50 hectares of land respectively for its activities in Kakwanzi village, Kitti parish, Bukamba sub-county in Kalungu district.

The company told court that they had lawfully obtained the licenses and had since contracted M/S Victoria Construction Company to build access roads to the project sites from Kampala-Masaka highway in line with the permits they acquired.

They contend that they were shocked when parliament directed NEMA to seal off the access to the construction sites and confiscate some construction equipment and trucks within the area.

DMW through their lawyers argued further that their project had been frustrated and subjected to loss of income as a result of failure to have a lawful justification for the actions done by NEMA  through parliament.

However, during the hearing, the government argued that parliament never issued any directive banning sand mining and as such, the company was not entitled to the remedies they sought from court.

NEMA  which was also sued alongside government confirmed that it had permitted the company to do the activities it was doing. NEMA added that it (NEMA) had the right to withdraw or cancel permits due to non-compliance, substantial modification or undesirable effects of permitted activities.

However, in his judgement, justice Dr Andrew Bashaija, the head of the civil division of High court agreed with the company citing that indeed parliament erroneously halted the mining activities as there is no valid justification whatsoever for their actions.

Bashaija explained that since the company had obtained permits from NEMA, it had the legitimate expectation to earn from the sand mines adding that its licenses were halted unlawfully without justification before the expiry of the respective terms of permits.

In his view, this occasioned financial loss of business expectation which was the legitimate expectation of the company. The judge says the evidence before him indicates that the company had entered into contract with several other companies to supply them sand and as a result it made losses worth billions of shillings.

To support his decision, Bashaija has accordingly awarded the company Shs 178 billion for loss of business and earning and Shs 3 billion as special damages. The monies will attract a 10 per cent per annum until payment is done in full.

Environmentalists have argued that sand mining has destabilised riverbeds and water tables and is one of the causes of increasing flash floods and rising Lake Victoria water levels.

Whats this pastor's tax record like from previous businesses if any?

For us abantu bawansi, that could at least get us thinking about the need for him to stay in business no matter what!
Report to administrator
+1 #2 Ndugu 2020-05-22 19:54
This is sick! Why should taxpayers be made to suffer because of a likely crook who has perhaps never paid any taxes in his life.

Typically, all it takes is Byashaija. This is unbelievably sick. Africa is on a terrible descent.
Report to administrator
+2 #3 kabayekka 2020-05-22 22:07
Any normal citizen of Uganda knows well what is going on other than this judge.

Because the judge seems to be living in another world of Africa, where environmental issues that are suffering corruption do not exist.

One cannot see why the tax payer must pay for such administrative mistakes?
Report to administrator
0 #4 PKayanja 2020-05-24 09:28
Imagine investing 3billion and then getting 181billion in compensation? This only happens in Banana republics like Uganda.

From the way the AG shabbily defended NEMA, it's clear they are working together with the fake pastor to defraud government. And our visionary leader just looks on as this plunder goes on
Report to administrator