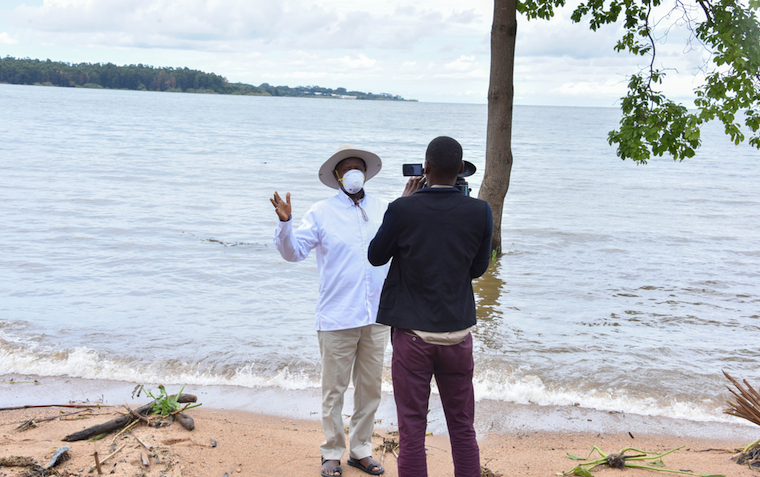 President Museveni on the shores of L.Victoria

President Yoweri Kaguta Museveni has cautioned the general public to always wear masks whenever they are out of their homes. The president said wearing mask will help combat the spread of the Coronavirus (COVID-19) and its infection to other people.

“People seem not to understand the value of the masks; these are not a decoration. We don’t want you to be seen with the mask hanging around your neck. Put the mask over your mouth and nose all the time as long as you are in public. Even when you are speaking, leave the mask on because if you remove and speak, you are infecting the air and also the hands you are fidgeting with while removing the mask can bring the infection,” said Museveni.

He was speaking shortly after making an abrupt stop-over at Kitubulu on the shores of Lake Victoria, near Ssese gateway beach, to observe the increasing water levels on his way to State House Entebbe for state duties.

On the issue of the increasing L.Victoria waters, Museveni noted that the water was just 0.1 short of the 1964 record levels of 13.41 metres. He said despite this, the country will be able to protect its dams because they have built two exit gates for the water to go through.

“In 1964, the water destroyed a lot of things but this time we shall be able to protect the dams because we have expanded our exit gates at Jinja. In 1964 there was only one exit gate at Jinja which could only release 1300 cubic metres of water per second, but now we have two gates, there is one which goes through Kiira at the Jinja side and the one which goes through the Nalubaale in the Buganda side, if you combine both of them, they can allow 3000 cubic metres of water per second to go through,” he added.

For the people near the shores and the river banks, Museveni advised them to move away from the waterway before the increasing water levels destroy them and their property because the rains were not about to stop. He reiterated that these people are the ones who invaded where the water flows and should move away before they are swallowed up.

Museveni re-emphasized the need for people to adhere to government rules of building 500 metres away from the shore or else they will bring disaster to themselves. To the politicians who are still thinking of giving out food to the people in this period, Museveni advised them to refrain from it, saying this would prevent crowds that bring a risk of spreading the infection.

“When I stopped at Kitubulu, immediately a small rally formed and I had to run away. When people see a political leader especially the one they like, they will gather and that it is how the virus spreads,” he said.

I see people wearing masks on their chins; even senior government officials are ignorant about the importance of face masks and how to wear them appropriately.

Has Musevni tested himself for the COVID-19? The world wanna know.
Report to administrator
0 #4 eboo 2020-05-09 13:02
"When I stopped at Kitubulu, immediately a small rally formed and I had to run away." YKM things to see before I die #bucketlist.

Mr. President while you're educating Ugandans on how to put on face masks, on the other hand you let infected foreign truck drivers to spread the disease.

It's as if Musevnei is telling Ugandans to get feady to die as they are not important & of no use!

How many Ugandans can afford masks that MUST be replaced very regularly or those that MUST be washed after a few hours of use at 60% in washing machines?

Museveni as educated Ugandans in being obedient slaves to get hand outs & our people are not aware they MUST bring down the tribalistic system FIRST & ABOVE ALL, if they want the demon out!

The Government is supposed to provide these masks since the populace are not working at the mo...

Unfortunately, I am losing hope that any one of the concerned will understand that :

1. The masks in most parts of the country are not available and are too expensive for poor people to afford, even tailor made local ones are hard to come by!!!

2. Government must provide the masks to the people, since relief food has become a totally unmanageable undertaking by oba disaster preparedness Minister or is it OPM...!!!??? May be masks will be easier to give to people..
Report to administrator