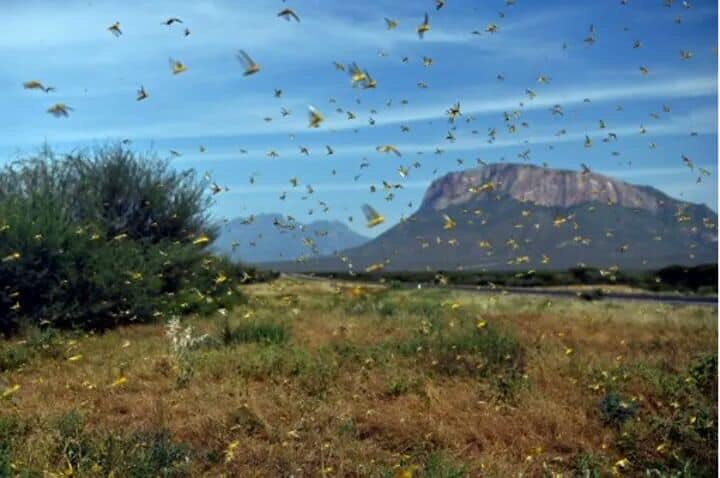 A large swarm of desert locusts estimated to cover about 100,000 acres has entered into Uganda and settled in the districts of Karamoja sub-region in northeastern Uganda.

According to the Amudat district senior agricultural officer Joseph Marimoi, the locusts entered through Karita border area and spread throughout Karita sub-county in the areas of Akou lee, Nacemato, and around the mountains.

He says that the locusts migrated in dense swarms westwards towards Nakapipripirit and Nabilatuk districts. Marimoi said the district authorities have informed the ministry of Agriculture Animal Industries and Fisheries about the fresh invasion of the desert locusts.

Marimoi explained that the production department could not immediately track the movement of the locusts because the department was ill-prepared. The invasion of the locusts comes at a time the country is struggling to contain the spread of the coronavirus pandemic.

On Sunday morning, a team of UPDF soldiers battled with the insects in Namalu sub county Nakapiripirit district where they settled last night. The UPDF team sprayed the insects in several villages in Namalu for several hours according to the UPDF spokesperson for Third Division, Maj Peter Mugisa.

He said the spraying was not effective because the desert locusts are continuously moving, flying high in the sky, therefore, limiting the success of the hand spraying.

The insects have currently moved and settled in Nakapiripirt district and Loregei in Lolacet sub county Nabilatuk and are being pursued by the UPDF. Nakapiripirit district entomology officer, Dr Simon Peter Amoga says they are tracking movement of the locusts in order to inform the UPDF for a response.

The desert locusts first invaded Uganda on January 19 entering the country through the same Alakas in Amudat district.

They spread to other regions but the UPDF managed to kill the insects through hand spraying with assistance from the Desert Locust Control Organization of East Africa.