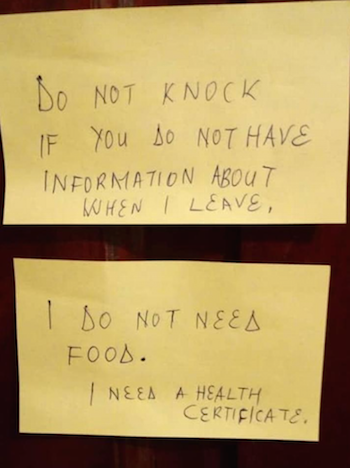 A cross-section of people held under quarantine in Kampala and Entebbe have declared a hunger strike after the Health ministry extended their stay for another 14 days.

Although many had completed their institutional quarantine towards the end of the week, the government said they will all have to stay for another 14 days after one of the quarantined persons tested positive for coronavirus disease (COVID-19).

Even those that tested negative on the last day of the quarantine have not been cleared to go home despite their claims of not having come in contact with the confirmed cases. Uganda's confirmed coronavirus cases remain at 48 after all 398 samples tested negative.

The Observer columnist and cartoonist also lecturer at Uganda Martyrs University, Dr Jimspire Spire Ssentongo says that although he tested negative for COVID-19 and has always been locked up in his room for the past 14 days, the government has decided to continue to hold him in quarantine for another 14 days.

Ssentongo who came back to Uganda on March 18 is bothered that several people who returned with him on the same flight were never quarantined, while others were given special consideration to be quarantined from within their homes, yet those who have endured the institutional quarantine are still being held for more days.

Ssentongo who is currently quarantined at Arch Apartments in Ntinda with 15 other people says all of them stayed in self-contained rooms where they had no contact with anyone. Today, he posted a protest note on social media saying that their only crime is the fact that someone in the same quarantine centre who has also been in his own room throughout tested positive.

Ssentongo has declared a protest, saying he needs no one to knock on his door except if they have news for when he is getting his quarantine certificate. He says he does not need food but only needs to get out of there.

"I have been in quarantine since then. Of course the first part was mismanaged and we were moved from Entebbe to here. It has been 15 days here in my room, and then they pass the new policy by which if any person is found positive here, then we begin afresh. If I have been here for 18 days and they test and find that one person is positive, they then start counting 14 more days meaning this will continue endlessly. They seem not to care about the implications of this. It is not based on science, it is not based on logic. It is based on a pure gamble because if I am in my room locked not interacting with people." said Ssentongo on telephone.

Reacheal Namutebi, who is also held up in Arch apartments says that their fear is that they will be held longer than expected, adding that although a positive case was discovered a week ago, the new policy on quarantine has been abruptly enforced without due consideration of their plight.

“I am stressed, I have a headache because of this and we are all worried. The problem is that some cases might come as a result of the bad quarantine system,” she says.

Another person quarantined at Entebbe Central Inn said she was starting a hunger strike in protest of her continued detention.  At the Entebbe based Central Inn, there are 45 people under quarantine.

"This is now day 17 in Covid quarantine. We were tested on the 14th…a directive was brought in a day before of institutional quarantine whilst we were in air travelling over here…we observed well the travel advisory…The tests were carried on the 14th we have health certificates," she said.

The Uganda Virus Research Institute director Dr Pontiano Kaleebu says that scientifically if the people under quarantine did not mix and were locked up in their rooms, they should be cleared to go.

He says that they had a meeting during the week where it was said that when someone tests positive in a hotel, the people there should have their stay extended. He, however, referred the matter to Dr Henry Kyobe, the COVID-19 incident commander.

We are all in institutional quarantine the World over. This is another post 9/11 new World order. Future travel anywhere in the World will not be the same.

Travelers will be quarantined at the slightest indication of a higher than normal temperature. No one will enter another Country without a Vaccination Certificate for all sorts of diseases and afflictions.

Travel will cease to be a necessity. Cheer up and know that the grass is not any greener anywhere anymore.
Report to administrator
+2 #6 Webz 2020-04-05 17:42
Deer Quarantinees, you are not alone in it. It is no joy out here either because we are in a curfew and no food because jobs have gone.

You are better off there in a secure self contained rooms where you are even fed regularly. Busy yourself with a smart phone and do some exercises in your room as wait a bit longer. Thanx.
Report to administrator