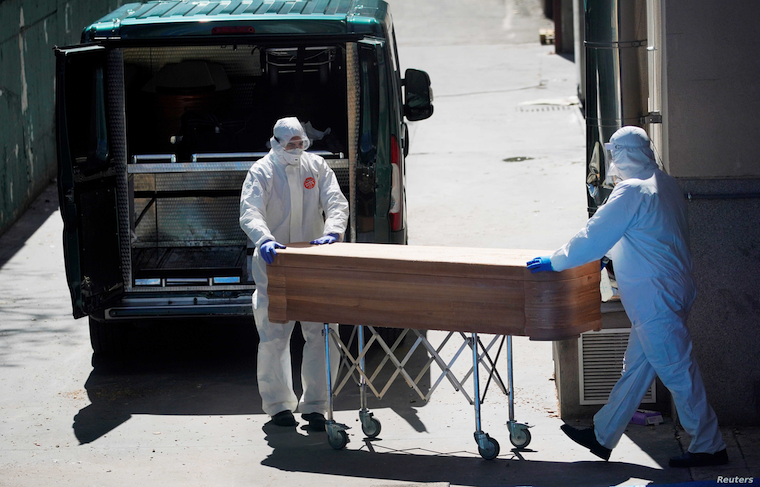 Mortuary workers push a coffin of a person who died at a nursing home during the coronavirus disease (COVID-19) outbreak in Leganes Madrid, Spain, April 2, 2020

Uganda's cases rose to 45 cases after one new case was confirmed on Thursday. Out of the 302 samples tested, 301 samples tested negative according to ministry of Health. Globally, the coronavirus pandemic has hit a grim milestone of 1 million confirmed cases. As of Friday morning, there are 1,016,413 confirmed cases.

The count by Johns Hopkins University says more than one-fourth, or 236,000 of the cases, are in the United States. The worldwide death toll stands at 53,238. Italy reported the most fatalities with more than 13,000 and climbing daily.

Around the globe, the impact of the coronavirus wreaked havoc on national and local governments trying to rush medical equipment to hospitals, along with workers who have been laid off by the millions as businesses end normal operations.

Another 6.65 million jobless workers in the U.S. filed new claims for unemployment compensation last week, pushing the three-week total to more than 10 million.

In China, where the virus first erupted, 600,000 people in Henan province were placed on lockdown, a signal that Chinese officials feared a new outbreak.

In Los Angeles, the second biggest U.S. city, the mayor urged people to wear masks in public. U.S. health officials are considering whether to urge all Americans to follow suit, but so far have not made a national recommendation.

The U.S. Centers for Disease Control and Prevention warned Wednesday that anyone can be a coronavirus carrier even if they aren’t showing any symptoms.

The CDC affirmed a study from Singapore that says 10% of new cases were spread by people who showed no signs of being sick. The agency says the study reinforces the need for social distancing, staying at least two meters away from other people.

British Prime Minister Boris Johnson, himself in isolation after testing positive for the coronavirus, said in a video message that Britain would be “massively increasing testing” as the key to ultimately defeating the virus.

Belgium has a large number of cases relative to its size, reporting Thursday it confirmed more than 15,000 cases thus far with a surge past 1,000 deaths.  With a population of 11.4 million people, Belgium sits in or near the top 10 worldwide for both figures.

In Mexico, the country’s foreign ministry urged Mexicans residing in other countries – particularly the United States – not to travel home to visit family right now due to the risk of importing cases.

Israel’s health ministry announced Thursday that its leader, Yaakov Litzman, has tested positive for coronavirus and is in isolation. Greek officials said 119 people aboard a passenger ship have been confirmed as positive for the coronavirus.

The ferry, with 380 people on board from several countries, has been anchored outside Greece's main port of Piraeus for several days. It was chartered to house workers who were to work on a shipbuilding project in Spain.

In Paris, a portion of Europe's largest food depot is being converted into a mortuary, because the number of bodies is accumulating too fast for funeral homes to cope.

In Cyprus, a domestic abuse association said the forced seclusion brought on by the coronavirus resulted in a nearly 50% spike in family violence reports in March. The Association for the Prevention and Handling of Violence in the Family said it had nearly 2,100 calls to its helpline in March, but more than half of them went unanswered because the staff was overwhelmed.