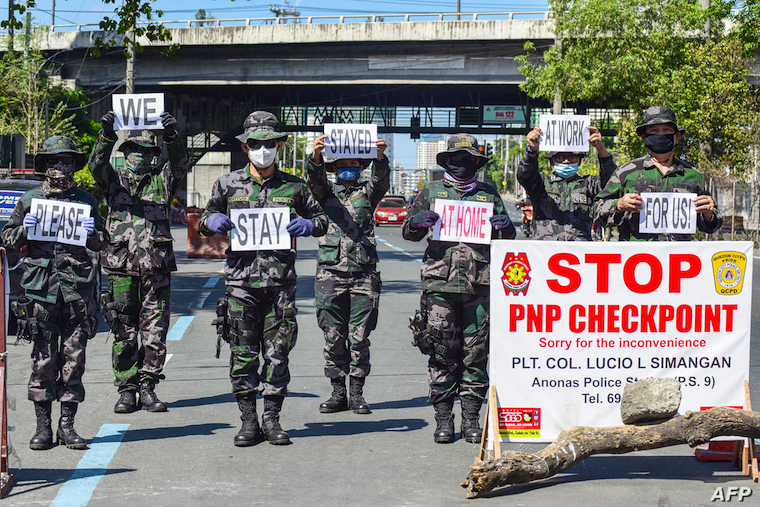 Police hold up placards reminding people to stay at home amid concerns of the spread of COVID-19 in Manila on March 31, 2020

Philippine President Rodrigo Duterte says anyone who violates the government’s lockdown measures to combat the coronavirus outbreak could be shot by police.

Duterte issued the warning during a televised address Wednesday in response to demonstrations in a poor neighbourhood in Manila by residents angry over insufficient food aid.

He told police if they feel their lives are in danger when they confront protesters to “shoot them dead.”

Duterte also warned of harsh punishments for anyone responsible for attacking doctors and other health care workers. Duterte has been condemned for his bombastic rhetoric coupled with his brutal crackdown on illicit drugs that has left thousands of suspected drug traffickers and users dead.

The Philippines has 2,311 confirmed cases of COVID-19 infections, with 96 deaths.

+1 #1 Kalitunsi 2020-04-02 17:29
This social distancing thing is serious. One persons carelessness and total disregard of directives can cause a whole section of society to perish.

You see poor Ugandans running in droves to the LCs office to get some freebies. For Ugandans as long as there is anything free, they will break their backs and even risk their lives to have it.

It's like they have lost human dignity and have become bonafide beggars. God save us.
Report to administrator
0 #2 Amooti Mugi 2020-04-03 08:38
That is the reality the Chinese flu!!!

A reckless,or careless,or negligent,or corrupt individual with the Corona virus infection can lead to the death of an entire population of a country!

What rights would such a person have??? What about taking a bribe to let a suspected patient is into the population, do you toy with such a thug?
Report to administrator