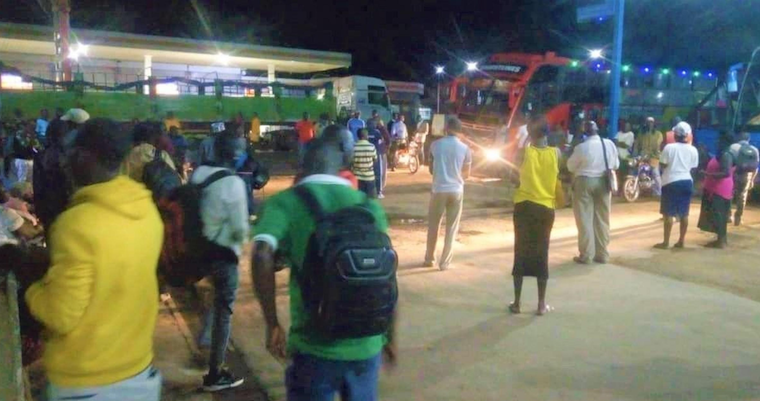 On Wednesday Museveni announced a travel ban on public transport in order to curtail further spread of the coronavirus (COVID-19) in the country.

Uganda currently has 14 confirmed cases and Museveni since the virus spreads faster when there are social gatherings, a ban on public transport after banning of weekly markets and closing schools was an inevitable directive. Museveni banned taxis, buses and boda bodas from carrying any passengers with trucks carrying food and private vehicles not allowed to carry more than two passengers.

Michael Odora, a passenger from Kitgum aboard Homeland bus to Kampala expressed disappointment at the sudden implementation Museveni's directive saying it inconvenienced his response to an emergency in the city.

Another disgruntled passenger, Beatrice Lapobo, who had booked to leave by 10:00 pm bus told URN that it would have been better to announce a 24-hour grace period to allow travellers to adjust to the ban.

Since Monday, 10 people who include five Ugandans and five South Sudanese have been isolated in Gulu after they defied 14 days’ quarantine precautionary measure for travellers entering the country.

0 #1 Akot 2020-03-26 16:51
Really, Europeans/Americans are stranded abroad because of border closure, blockage of planes entering/leaving countries they are blocked in!

But Ugandans are stranded in their own country!

If coronavirus has shut us all up left people without help from so called leaders, then why:

- Do Ugandans maintain the tribalistic system keeping Museveni in power?

- Why do Europe/USA still keep forces abroad in wars that don't concern them?

- USA/Europe should know their forces are needed back home, in case people ge frustrated/afraid & start fighting themselves over food.

- Why does UN still talk about wars, refugees, migration, instead of sending UN forces deploye in war zones back to their countries, so that they are ready to help when people get crazy & cause chaos that police won't be able to contain?...
Quote | Report to administrator
0 #2 Akot 2020-03-26 16:55
...With Uncertainty coronavirus is causing & countries closing borders, isolating themselves..., Ugandans must either;

- UNITE to throw Museveni out, or

Do Ugandans still have any reason to block/imprison one another to ensure Museveni just rules?

Is there any difference between Musevnei & coronavirus?...

Ugandans are already isolated from one another through the tribalistic system & all they need is;

- each triba breaking away, manage its land riches & serve its people, or

- say NO to the tribalistic system & UNITE to end Museveni's diabolical rule & reform the Republic!

As it is, Ugandans are without plans, without leadership, without control of their country, thus in danger from all concers!...
Quote | Report to administrator
0 #3 Akot 2020-03-26 17:01
...EU member states are isolating/closing borders, restricting trade while encouraging home grown food to imported - each country has become real 'nation' in full control; yet before coronavisus, this was considered unaccepted, criticised by E. Macron & punishable by Brussels!

Now Macron is calling French to UNITY not for EU, but for France in order to fight coronavirus!

Every EU member country is calling for UNITY to handle coronavirus!

B. Johnson is calling for UNITY to fight coronavirus!

But Ugandans maintain Musevnei through the tribalistic system the demon put in place in a zone he has no tribal land in, yet holds every tribe by the balls!

There are times people have to put aside differences, especially tribal differences/power struggle, as Dr Obote & Sir E. Mutesa ll did), to handle common issues & protect people & their land!
Quote | Report to administrator
0 #4 Apollo 2020-03-26 18:04
Whereas the presidential decree is well intended, it does not appear to be backed by a statutory instrument.

This pandemic is giving the Gen Museveni draconian power and may set a regrettable precedent in the future.

Parliament should have handed him an instrument by first declaring a State of Emergency and thereafter permitting him to act by presidential decree for a specific limited time, which it expired, would be returned to Parliament to consider a new instrument or time.

For now, Parliament and by extension Ugandans have handed Gen. Museveni carte blanche to act arbitrarily now and in the future.
Quote | Report to administrator
0 #5 miki 2020-03-26 22:15
Apollo you are right. And look what is happening - Ugandans are being assaulted and beaten for just trying to find food for their families.

The curbs and limitations ought to have been thought out better especially in a country where the majority live to mouth and have to go out of their houses to get food.

Look at how the good idea of self quarantine was bungled up! If the price for cooperating is $1400 everybody would try to beat it.

That is why the high risk recent returnees from Dubai are not going to show up for assessment or even screening despite calls by health officials to do so.

The problem is that Mr. Museveni thinks that Uganda can fight this pandemic by haphazard presidential decrees and without spending any money.

There have to be alternatives for people whose survival depends on getting out of the house everyday, and also people should know that reporting for screening is not going to impoverish or endanger them.
Quote | Report to administrator
0 #6 Kabayekka 2020-03-27 05:44
Apollo you have a good point that parliament knows very well. Naye bewuggusa.
Quote | Report to administrator
0 #7 Kabayekka 2020-03-27 05:52
Good that it is happening to Northern people who caused much of the mess in this country.

However, disease when it strikes it does not provide a grace period!
Quote | Report to administrator
Refresh comments list
RSS feed for comments to this post
Add comment