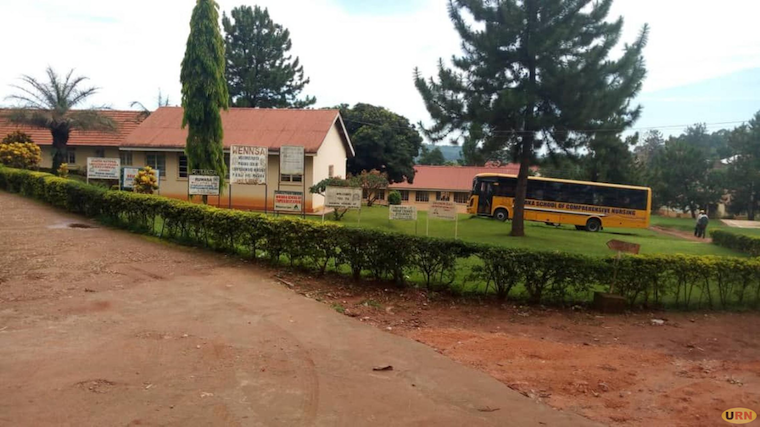 Masaka Comprehensive Nursing School has been turned into a quarantine centre

After the shutdown of schools countrywide announced last week, some of their premises will be used as mandatory coronavirus quarantine centres, President Museveni has said.

With 14 cases of Covid-19 confirmed so far in Uganda, President Museveni suggested on Sunday in a televised address that schools will offer space for temporary quarantine centers.

Speaking at State Lodge, Nakasero on Sunday, Museveni said schools can be utilised to quarantine people suspected of having the coronavirus – to save on hotel costs – until the 32-day lockdown expires. The lockdown was announced on March 18.

Uganda announced her first case of Covid-19 on Saturday night, March 21. He is a 36-year-old male resident of Kibuli who arrived in the country on Saturday aboard Ethiopian Airlines with 84 other passengers from Dubai. On Monday, eight more cases were confirmed after tests returned positive from the Uganda Virus Research Institute.

On Sunday, Museveni said some superstitious head teachers were reluctant to offer quarantine spaces at their schools.

“I want to de-campaign ignorance. We have been trying to get some schools to quarantine people but I have been told that some people are superstitious. They say that once the coronavirus people stay there, they will bring ekisiraani [bad omen] to the school and that children will fear to come back,” Museveni said, adding: “What sort of thing is this? How can this happen in a society where people are educated? We are saying that the virus, even if you did nothing, it can stay alive for nine days on the plastic surface but dies quickly on other surfaces.”

He said once schools grant the Health ministry access, they will disinfect their premises every morning and “no virus will survive.”

“So, we cannot be guided by lack of science. I will talk to Maama [the first lady and minister of Education, Janet Museveni] and her head teachers whom I thought are people from university and educated and cannot be governed by superstitions,” Museveni said.

In an interview on Tuesday, the president of the Uganda Medical Association, Dr Richard Idro, said schools will be safe for learners after quarantine.

“The people in quarantine are not sick but we want to keep them in one space until we are sure about their health after 14 days. Even when they walk around the compound and leave droplets, the virus stays on a surface up to nine days and at most, 12 days. So, by the time children return to school, the virus would have died,” Idro said.

About fumigation, he said, as long as the sanitizers contain alcohol content of over 60 per cent, it will kill the virus.

On March 21, The Observer columnist Jimmy Spire Ssentongo, one of the travellers under quarantine, took to social media to publicize the hefty charges leveled at the Entebbe-based Central Inn hotel.

A receipt from Central Inn Ltd dated March 21 showed that Ssentongo paid Shs 418,500 for a single room for two nights.

He posted: “…. On day four, the Ugandans here are being moved to another hotel (quarantine center) in Ntinda. The promise is that government will cover the accommodation and meals where we are going. We had to first clear our bills with Central Inn. Some [travellers] had no money at all on them. We had to fundraise to clear for them to be able to leave.”

Sentongo added: “I spent the first night at the lobby. I won’t talk about the condition in which we are travelling. It appears government is trying hard to handle many emergencies….”

Sentongo has so far spent seven of the mandatory 14 days under quarantine. The president is optimistic that some schools will be identified for quarantine.

“Let us be tough so that we defeat this enemy and go back to normal. If we are lousy, we are really going to suffer and you should prepare for hundreds and thousands of graves,” Museveni said while emphasizing that Covid-19 is easy to defeat “if we are serious because it spreads through two methods; sneezing out and coughing near people.”

According to the ministry of Health permanent secretary, Dr Diana Atwine, majority of people start infecting others two days before symptoms such as sneezing and coughing start.

Museveni urged learners to stay at home instead of loitering in trading centers since it nullifies government efforts to prevent contraction and spread of the virus.

IMPACT ON THE SECTOR

In his March 18 address – before Uganda registered a case – Museveni ordered all educational institutions across the country to close for 32 days. He reasoned that the 42 million Ugandans are divided into about eight million homesteads that can ably accommodate the learners.

Museveni’s abrupt closure of educational institutions has disrupted many programmes on the school calendar.

According to the Education and Sports ministry’s 2020 schools and other institutions calendar, term one which began on February 3 and was scheduled to end on May 1, 2020.

Second term had been planned to start May 25 and end on August 21 while the third term would start on September 14 and end November 27, 2020. With Covid-19, there is a very likely possibility of more adjustments to this calendar.

In a circular dated March 19, the permanent secretary, Alex Kakooza, said the ministry will communicate to all stakeholders in writing upon the expiry of the 32-day lockdown and further guide on arrangements for re-opening.

“It is important to note that unless otherwise communicated, there will be no extra charges for continuation of the term or semester. All heads of institutions should keep a skeleton staff at school to support them perform administrative duties and attend to clients,” reads the circular. “Please note that stern disciplinary action shall be taken against any head of institution operating contrary to this directive.”

In most schools, learners were sent home with learning packages. For senior one pioneer students of the revised lower secondary curriculum, the National Curriculum Development Centre (NCDC) is contemplating ways to recover the lost time.

The NCDC director, Grace Baguma, said there was a proposal to televise the curriculum but that was quashed. “How will you reach a learner in hard-to-reach-and-stay areas without a television set in their home? So, it is a challenge. If we had prepared parents in time, we could have put the materials online to engage learners at home. But even then, how many people can access this medium in the country?” Baguma asked.

She added that NCDC had thought of compatible options for a basic mobile phone but that meant a parent had to buy airtime which is costly “yet telecoms cannot give them free airtime for learning purposes during this closure.”

On April 1, 2020, Uganda National Examinations Board (Uneb) was scheduled to begin registration of candidates but the board has suspended this exercise. UNEB is now handling online applications for letters of verification of results while final documents will be strictly picked by invitation.

For applications for equating academic documents, Uneb executive secretary Dan N. Odongo said: “We are currently handling only those who had already applied and received communication to come and collect their documents. New applications have been suspended until further notice.”

Application for centre validation remains online while those seeking jobs, training of examiners and scouts should deliver their papers to the Uneb offices in Ntinda.

Uganda Business and Technical Examinations Board (Ubteb) has also extended the registration deadline for the May-June 2020 examination series until the president lifts the 32-day closure.

“We advised that our clients shall visit the secretariat offices for only critical issues that cannot be done online,” Onesmus Oyesigye, the Ubteb executive secretary, said.

At the Law Development Centre (LDC), the director Frank Nigel Othembi said: “All campuses and legal aid clinics will remain closed. Staff are encouraged to work from home, remote locations outside LDC and/or online. A revised academic timetable with rescheduled academic activities including the Bar Course Oral Examinations and other examinations shall be communicated in due course.” LDC plans to resume normal operations on April 20, unless advised otherwise by government.