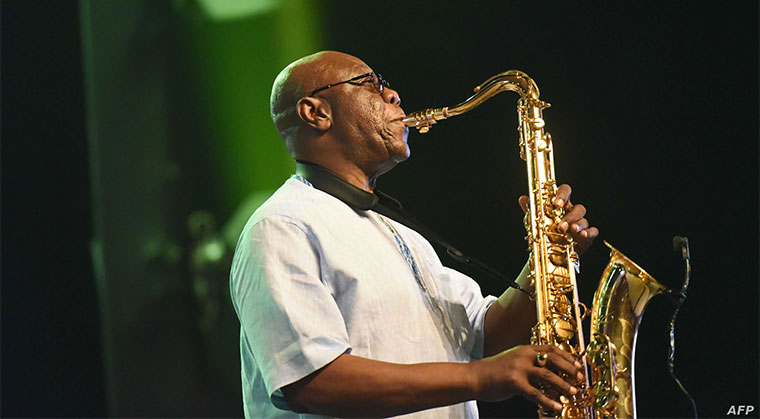 Manu Dibango, saxophonist and Franco-Cameroonian singer of world jazz, performs during his concert at the Ivory Hotel Abidjan

Cameroon is mourning the loss of legendary saxophonist and singer Manu Dibango, who died of COVID-19 in France.

Family members and lovers of his music have been visiting the iconic musician’s relatives in his country of origin to express their condolences. Family members and fans of music icon Manu Dibango have been weeping at his Douala residence in Cameroon since news of the 86-year-old’s death broke Tuesday morning.

Thirty-year-old Olive Njock, speaking through a messaging app from Douala, says Africa has lost a talent and peacemaker. She says she feels devastated that a man who is known to have used music to make Cameroon and Africa smile and forget about challenges like famine, wars and diseases has unexpectedly succumbed to COVID-19.

She says souvenirs bearing Manu Dibango’s constant smile will always remain in the minds of Africans. Cameroon state radio announced that Dibango died from COVID-19 complications in Paris, where he had lived for close to 40 years.

Dibango rose to international fame when he released this tune, Soul Makossa, a blend of Cameroonian and Congolese rhythms. It was used as the theme of the 1972 Africa Cup of Nations football tournament, and became one of the few African songs to reach the top 40 charts in the United States.

In 2009,  Dibango  filed a lawsuit asserting that Michael Jackson stole a hook from the song for Jackson’s hit “Wanna Be Starting Something.” Jackson settled the case out of court.

Over a career that lasted more than six decades, Dibango released 70 albums and worked with artists such as South Africa’s Ladysmith Black Mombazo and American jazz composer Herbie Hancock.

Cameroonian singer and composer Adeline Mbehnkum says Dibango’s works will always be remembered. She says the saxophonist was a blessing to Cameroon.

"We are going to miss his simplicity, his positive attitude towards constructing and his love for country," she said. "Despite his long stay in France, Manu Dibango has remained very attached to this country. We will miss him a lot, but I know that his works will live and will continue to guide the younger generation that is coming up."

A message on Dibango’s official Facebook page adds that his funeral service will be held in strict privacy, and a tribute to his memory will be organized when possible. His fans say they regret that they will not be able to bury their icon back at home.