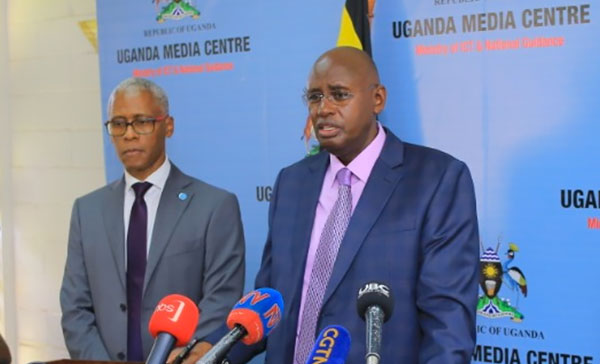 Bright Rwamirama, the minister of state for Animal Industry, has vowed to wipe out the political intrigue, impunity and corruption that has snarled operations of the National Animal Genetic Resource Centre and Databank (NAGRC & DB) in recent years.

This declaration follows last week’s familiarisation tour of the NAGRC & DB base in Entebbe in which Dr Charles Lagu, the NAGRC & DB executive director, briefed the minister about the challenges of the body.

Rwamirama, who is returning to the docket after almost four years in the ministry of Defence, was appalled to learn that there is a scramble for NAGRC & DB resources from within as well as outside pressure from the ministry of Agriculture, Animal Industry and Fisheries (MAAIF).

“The good thing is I’m back…and the bad thing is also that I’m back,” he said. “I’m disappointed to learn that huge chunks of NAGRC & DB land has been grabbed with impunity. Even animals have not been spared.”

Rwamirama also noted that the encroachment on NAGRC & DB and theft of cattle breeds is being aided by people within.

“There is collusion between some wrong elements within NAGRC & DB to defraud the government and I’m going to deal with them immediately. The biggest disappointment is that this is done by stakeholders supposed to defend the institution. There is no reason why someone should move cattle meant for breeding for his own needs,” a tough-talking Rwamirama said in what could be seen as a veiled attack on his boss Vincent Ssempijja, the minister of Agriculture, Animal Industry and Fisheries.

It emerged recently that Ssempijja took 15 top cattle breeds from Busaana ranch in Kayunga to his constituency in Kalungu without approval from the NAGRC & DB board.

In fact, Dr Johnson Nkuuhe, the NAGRC & DB board chairman, expressed dismay at how Ssempijja acted. “As far as I know, there is no resolution that authorised that order [by Ssempijja],” he said. “We spend a lot of money to buy and raise those breeds; so, such actions take us back.”

According to a NAGRC & DB board member who preferred anonymity, some of the cattle Ssempijja took were part of those NAGRC & DB management bought in 2015. That year, according to the Audit report by the Auditor General, NAGRC & DB bought eight breeding bulls from South African farms valued at $212,000 for the purposes of extracting semen. “This is unacceptable because each bull cost almost Shs 100m and they are purposely for breeding.”

Ssempijja could not be reached out for comment but in an interview with The New Vision, the minister said he did nothing wrong and that the revelations are meant to taint his name.

“That was not stealing. There was a function I was having and everybody knew about it and it was announced over the media that the government was informing people of its achievements. We were supposed to invite large numbers of people and talk to them. So, I directed my staff to go and pick the animals and have them slaughtered for the celebrations,” Ssempijja said. “Check on all the ranches, it is not the first time I have done so. Check the records and see whether I have not been picking the animals on public functions,” the minister stated. Before noting that, “hoping nobody is blackmailing me,” he added.

Meanwhile, Rwamirama promised to deal with NAGRC & DB who “I understand the former executive director refused to hand over the official house…I will not tolerate this nonsense,” he said.

Some board members also accused Ssempijja of usurping the board in September 2019 to extend the contract of Dr Wilberforce Wandera Kifudde as manager technical and production in spite of the fact that he had reached retirement age.

This matter is now before court after Wednesday Lauben sued Ssempijja, along with the Attorney General and NAGRC & DB challenging the minister’s powers under judicial review.

When government set up the NAGRC & DB in 2001, it was aimed to play a leading role in the commercialization of animal breeding activities and to carry out development activities that enhance animal genetic improvement and productivity.

That mandate came with more than 150,000 hectares of land for government ranches, a budget allocation in billions plus a group of specialists to do the task. For years, NAGRC & DB has somehow evaded public scrutiny but a 2017 Auditor General’s report recommended a massive overhaul of its structure and operations.

Among others, it noted that almost one third of NAGRC & DB land has been grabbed by politicians and businessmen with the aid of some negligent NAGRC & DB staff.

+3 #1 R Katumba 2020-02-26 08:57
So Sempijja claims that the bulls meant for breeding which cost 100million shillings were slaughtered and eaten during a public celebration?