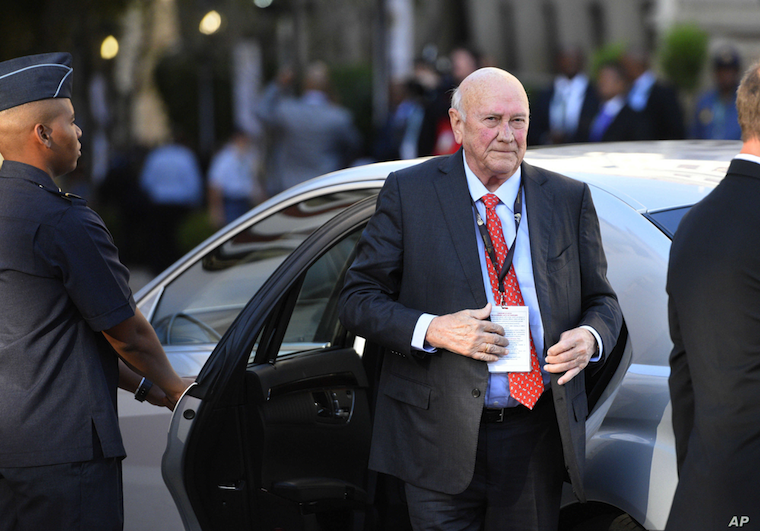 South Africa’s final apartheid president, F.W. de Klerk, has found himself in the crosshairs of the powerful African National Congress - and many others - since he said he didn’t believe the racist system was a crime against humanity.

While his comments - made earlier this month - have provoked outrage, African scholars have noted a sense of continental amnesia about the past, and say this misplaced nostalgia is not an exclusively South African phenomenon.

De Klerk was instrumental in ending apartheid, releasing Nelson Mandela from prison and ushering in democracy in 1994. De Klerk shared the 1993 Nobel Peace Prize with Mandela for their role in ending the apartheid regime that treated the nation’s non-white majority as second-class citizens.

‘I don’t fully agree with that’

45 per cent of today’s South Africans had yet to be born when that happened. But the wounds of apartheid still run deep, as seen by de Klerk’s heated exchange with state broadcaster SABC.

Reporter Manelisi Dubase pressed the former president to agree with the United Nations' classification of the system as a crime against humanity:

“I don't fully agree with that,” de Klerk responded, adding, “I profusely apologize for [apartheid]. But there's a difference between calling something a crime, like genocide is a crime. Apartheid cannot be, that's why I'm saying this, cannot be, for instance compared with genocide. There was never genocide.”

As Dubase then noted, thousands of people - most of them black were killed in internecine violence during apartheid. Additionally, countless protesters were killed in police detention or by police action, and millions of South Africans were subjected to daily indignities, restrictions and unfair treatment solely on the basis of their race.

And the African National Congress said the former president’s comments were “a clear and deliberate attempt to incite race hatred.”

“Apartheid was a brutal system of oppression and underdevelopment, and the United Nations in 1973 correctly declared it a crime against humanity," said ANC spokesman Pule Mabe.

“The nation is therefore indeed shocked, and we are all asking: Mr. de Klerk, was apartheid anything else than this definition by the entire world?”

Hate speech is not legally protected in South Africa, although the ANC did not explicitly call for punishment. The EFF, however, is calling for a case to be opened against De Klerk.

Independent political analyst Ralph Mathekga said he is worried about what he sees as a continent-wide attempt to revise what is often painful history. He pointed to the nostalgia over recently deceased Zimbabwean strongman Robert Mugabe, longtime Kenyan ruler Daniel Arap Moi, and others.

“When I look at how we reflect on Mugabe, we reflect on some former dictators, it's almost like we're saying -- and this has actually been a Nigerian saying, ’It is my own fish; leave him to me,’” he told VOA. "It’s like cutting off your nose to spite your face. Because if you look at the performance of those dictators, what have they achieved locally? There is no material benefit that justify this attempt to whitewash history.”

Mathekga was a high school student when apartheid ended. When asked if he thought apartheid was a crime against humanity, his reply was swift.

“Of course, there was no doubt about it...Forget about the Truth and Reconciliation Commission. The killing, mass killing, of black people, in Thembisa, in  Katlehong, in Sebokeng -- I've seen those with my eyes, so I cannot imagine any system that has been as atrocious as apartheid.”

De Klerk’s foundation, which had initially supported his comments, on Monday withdrew them, saying apartheid was a crime against humanity.

I believe and agree with the notion and the United Nations' classification of the system that apartheid was and is a crime against humanity since it was characterized with indiscriminate and mass killing of black people in south Africa.
Report to administrator
0 #2 jose 2020-02-19 09:00
These dictators should be given that treat that their families really feel unsafe

Otherwise this chest thumping when people are suffering should be taken as crime against humanity,

someone talked about mugabe, there is bashr, you can add on the list, but in angola they are taking a good step in treating the family members
Report to administrator