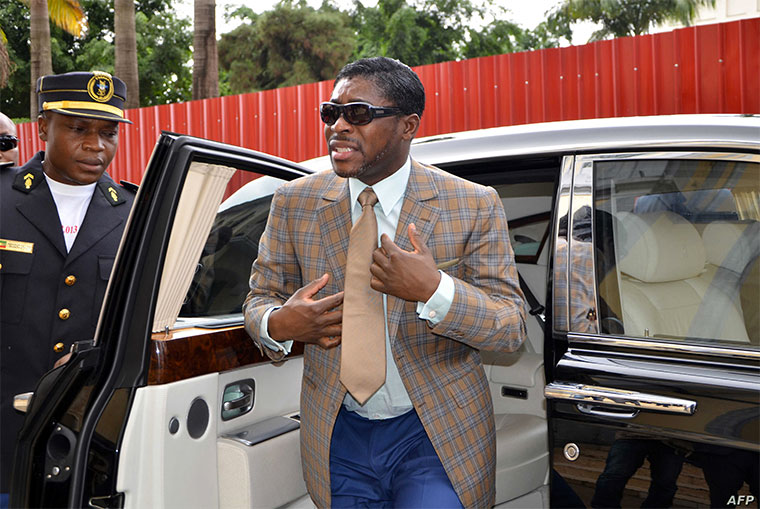 The slick-haired scion has a fondness for parties, supercars, fancy suits, jewellery, yachts and the company of hip hop stars, documenting many of his exploits on Instagram. The 50-year-old is the oldest son of Africa's longest-serving leader.

As vice president, he has been groomed to succeed his father as head of a state awash with oil but mired in poverty and a reputation for corruption. Transparency International rates Equatorial Guinea 173rd out of 180 countries on its 2019 Corruption Perceptions Index.

A Paris court last week upheld a three-year suspended jail term against the younger Obiang and handed him a 30-million-euro ($32.9 million) fine for using public money to buy a six-floor Paris home and luxury cars.

He becomes the first African leader to be sentenced in France for allegedly ill-gotten gains, although his assets have also been targeted in the United States and Switzerland.

Seemingly unabashed, within 40 minutes of the court's verdict, Obiang posted a video clip on social media showing him on a luxury motorbike in the capital Malabo.

In a profile by French TV at the turn of the millennium, he talked with pride of his wine collection, of buying 30 suits at once from top-market tailors and was filmed at the wheel of his cars, ranging from a Bentley and a Rolls-Royce to a Ferrari and a Lamborghini.

"I'm always looking for something exceptional," he said on camera to a jeweller who was showing him a watch worth more than 22,250 euros ($23,250).

Obiang was just 10 when in 1979 his father overthrew his bloodthirsty uncle, the dictator Francisco Macias Nguema. In the 1980s, the new leader's son was enrolled in the select Ecole des Roches in Normandy, northwest France, a school that prides itself on educating the offspring of leaders from all over the world.

Keen to live it up in Paris, Rio and the United States, Obiang was not even 30 when his father appointed him minister of Forests in 1997 in his tropical homeland. In the government post until 2012, Obiang was considered the godfather of the lucrative timber trade, but at the same time oil exports began to bring previously unimaginable wealth.

Most of the country's 1.2 million people live below the poverty threshold on less than two dollars a day, according to several economic indicators. In 2016, President Obiang — freshly elected with more than 90 per cent of the vote — named his son vice president.

Teodorin Obiang used this appointment to argue in vain at the International Court of Justice in The Hague that he had diplomatic immunity and could not be prosecuted in France.

In 2014, the US Justice Department forced Obiang to hand over more than $30 million in assets purchased with the proceeds of corruption. It estimated that he used his position and influence as a minister to amass wealth of more than $300 million.

"Through relentless embezzlement and extortion, [he] shamelessly looted his government and shook down businesses in his country to support his lavish lifestyle, while many of his fellow citizens lived in extreme poverty," it said.

The assets he forked over to settle the case included a $30-million mansion in Malibu, a Ferrari and various items of Michael Jackson memorabilia. In 2016, Swiss authorities seized 25 of Obiang's supercars and last year sold them at an auction, raising 21 million euros for social work in Equatorial Guinea.

And in 2018, the Brazilian police seized more than $16 million in cash and luxury watches in the luggage of a delegation accompanying Obiang.

Some times these guys make us regret being Africans

Sad story indeed. But lets not lose hope. Let us work towards building the Africa we desire and deserve.

That said, we should ask ourselves how our corrupt leaders have managed to keep power inspite of all these reports and known scandals.
Report to administrator
0 #3 Concerned Ugandan 2020-02-19 14:31
Meanwhile this looter's country is the country to which M7 traveled in 2017 for benchmarking in terms of oil governance. We are finished completely and also!!
Report to administrator