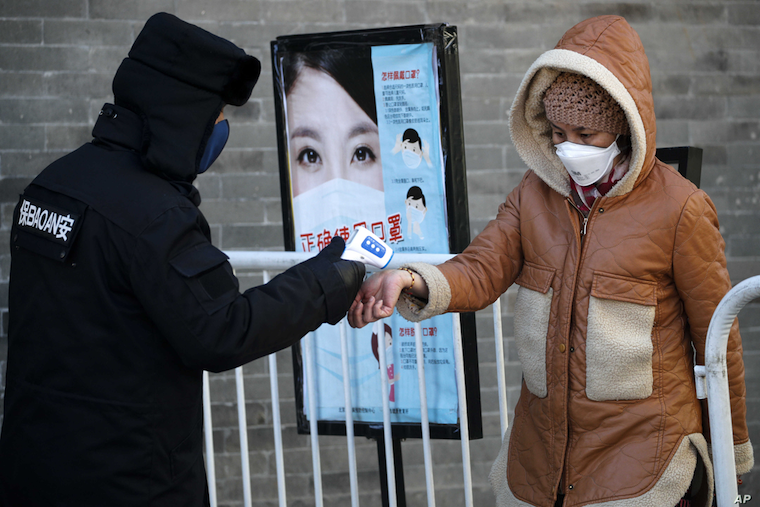 A woman wearing a protective face mask receives a temperature check from a security guard as she enters Qianmen Street, a popular tourist spot, in Beijing

Chinese health officials said Sunday that the number of new cases of the coronavirus has slowed for the third consecutive day.

The health commission confirmed 1,843 new cases, representing a drop from higher numbers of new cases in recent days. Over the previous two days, China had reported more than 7,500 new infections.

The death toll from the virus in mainland China hit 1,665, with 142 deaths reported Sunday. National Heath Commission spokesman Mi Feng said Sunday that the percentage of "severe" cases was dropping, and that the trends showed that China was succeeding in controlling the outbreak.

But the World Health Organization warned Sunday that it will be "impossible to predict which direction this epidemic will take."

Speaking from the Munich Security Conference, WHO chief Adhanom Ghebreyesus called on governments to work with WHO to adequately inform the public of the dangers of the virus without causing hysteria.

WHO said late Saturday there are 50,580 "laboratory-confirmed" cases of the coronavirus around the world, with the vast majority of the cases — 50,054 — located in China.

Also on Sunday, American passengers who had been quarantined on a cruise ship off the coast of Japan since February 3 were flown home.

The American passengers aboard the Diamond Princess, which reported 355 infected people, left the ship Sunday and were put on chartered flights back to the United States, where they will likely be quarantined for another fourteen days.

China's statistics, however, differ from those of WHO because China's government recently changed its methodology for diagnosing and counting new cases, causing a spike in the numbers of reported cases. Under the new method, doctors can use lung imaging and other analyses to diagnose a patient instead of relying on laboratory testing.

Also on Sunday, China's state media published a speech that President Xi Jinping delivered on February 3 about his involvement with the country's response to the coronavirus epidemic.  The speech was published late Saturday.

Local Chinese officials have been criticized for their handling of the virus outbreak, while the president's involvement was been downplayed, until now. The publication of Xi's speech, however,  has done little to squelch questions about China's management of the response.

The president apparently handed down instructions on combating the virus on January 7 and he ordered the shutdown of Hubei province.

"On January 22, in light of the epidemic's rapid spread and the challenges of prevention and control, I made a clear request that Hubei province implement comprehensive and stringent controls over the outflow of people," Xi told a meeting of the top leadership of the Communist Party.

Officials from the Wuhan — the city where the virus apparently emerged — and from Hubei — the province were Wuhan is located — have been fired by the Communist Party because of what was perceived as their inadequate response to the virus emergency.

The speech also seems to indicate the country's top leaders were slow to release information about the severity of the virus. A young doctor who took to social media to issue a warning about the emerging virus was upbraided by local police.  The doctor later died from the virus himself.

Meanwhile, Hubei's provincial government said Sunday that it will prohibit vehicle traffic across the province in an effort to stop the spread of the virus. Emergency and public service vehicles will be exempted.

China and WHO have launched a joint probe into the coronavirus.  "We're concerned about the lack of urgency in funding the response from the international community," WHO director-general Tedros Adhanom Ghebreyesus said at the annual Munich Security Conference.

Officials in China's capital have initiated a 14-day self-quarantine policy for all people returning to Beijing. The state-run Beijing Daily newspaper reports that those who refuse to seclude themselves or violate other containment rules "will be held accountable under the law," but it was not immediately clear what the consequences of refusing to self-isolate would be.

An 80-year-old Chinese tourist died Friday in a hospital in Paris. He was the first person in Europe to die of complications from the virus. In addition, the first coronavirus infection on the African continent has been reported in Egypt.

The Diamond Princess, a quarantined cruise ship docked in Yokohama, has reported another 70 virus-infected people, bringing the ship's total cases among the nearly 4,000 passengers and crew to 355.  "We must anticipate a spread of infections," Japanese Health minister Katsunobo Kato said Sunday.

Canada, Hong Kong, South Korea and the U.S. say they are sending planes to Japan to evacuate their citizens from the ship.