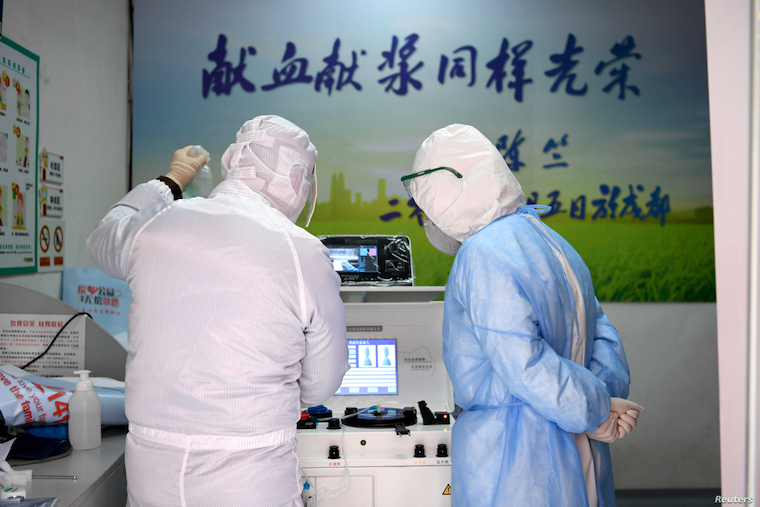 Medical workers in protective suits inspect equipment at a blood donation room of the Renmin Hospital of Wuhan University in Wuhan, the epicenter of the novel coronavirus outbreak

As the number of individuals identified as having had close contact with those diagnosed with coronavirus (COVID-19) rose to over half a million, those who have recovered from the disease are being urged to consider donating their blood to help cure others.

China’s National Health Commission reported that as of February 14th, 8,096 patients nationwide had been cured and discharged from hospitals.

“Those who are recovering, kindly extend your arms, donate your precious blood, let’s work together to save those still struggling against the devil of disease,” the head of Wuhan’s Jinyintan Hospital was quoted as saying by China’s official Xinhua news agency on Thursday.

“Those who have recovered possess a considerable amount of neutralizing antibodies in their bodies, which can fight against the new coronavirus,” Zhang Dingyu, the hospital director, announced at a news conference, according to Xinhua.

A neutralizing antibody is part of the body's response to an infection. Their creation can be triggered by the arrival of a foreign body such as a virus in the body, or by vaccinations.

“After an infection, it can take some time for the host to produce highly effective neutralizing antibodies but these persist to protect against future encounters with the agent,” researchers say.

Given that no vaccine or specially designated drugs are currently available, processed plasma from recovered patients’ blood could help those in critical condition, Xinhua reported.