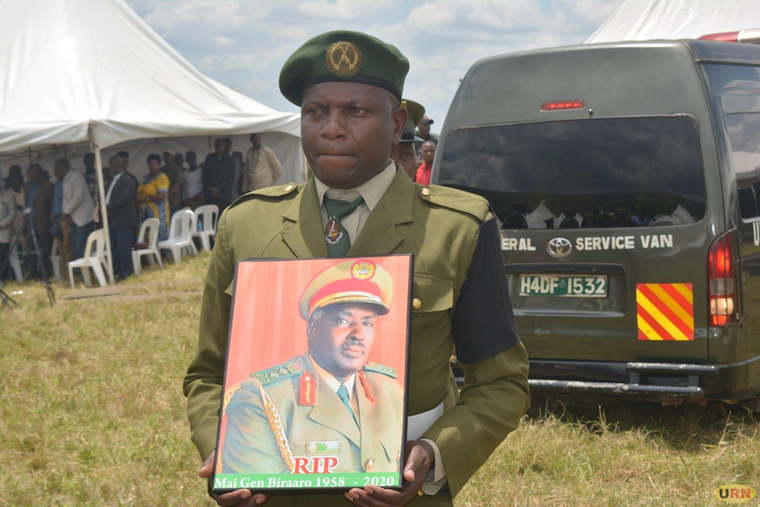 A UPDF soldier carrying a portrait of Gen Biraaro

Hundreds of mourners on Sunday turned up to bid farewell to the former presidential candidate Maj Gen Benon Buta Biraaro. Biraaro was laid to rest at his ancestral home in Rukiga-Rwengando, Masha sub-county in Isingiro district.

Biraaro, 61, was praised for contributing to the development in his home area and the nation at large. Nathan Karema, a resident of Masha said that Biraaro was a person who loved development, and advocated for poverty eradication at the household level. Karema says that Biraaro was an exemplary farmer and a good leader exhibiting good skills in farming and leadership. portrait

Aaron Nyesiga, a resident of Rumuri cell, said that the late Biraaro constructed a church in the area, a borehole and several water dams that benefited over four villages in Masha parish.

President Yoweri Museveni in his message read by the minister of Security Gen Elly Tumwine said that the late Biraaro was one of the most patriotic leaders.

"Maj Gen Biraaro was one of the patriotic leaders Uganda has ever had. He was a fiercely principled man whose actions matched his words. He was an incorruptible, fair and balanced person throughout his lifetime. He never tired in the quest to foster peace and unity." said Museveni in his message.

Joy Biraaro, praised her late husband as a loving and caring person. Biraaro succumbed to colon cancer on Wednesday afternoon from Kampala hospital where he was admitted on February 6, 2020.

He attended Nyakasura secondary school for O and A levels before joining Makerere University where he graduated in 1982 with a Bachelor of Arts in political science. In 1982 he joined the NRA bush war that brought Museveni into power.

+1 #1 A k Mukasa 2020-02-17 13:30
Empty words from Museveni. His words are an insult to the legacy of the man who stood up to be counted. Museveni only respects the dead not the living because the dead are no longer are threat to his selfish grip on power.

His magnanimity only applies to the dead. The living are there to be humiliated and hounded. He has no shame and everything he does in his god forsaken life is self serving. Save us the crocodile tears.
Report to administrator
0 #2 Lakwena 2020-02-17 17:09
What a self-indictment!

If Mr. M7 was not the "Problem of Africa/Uganda", Maj Gen Biraro (RIP) "the patriot and a fiercely principled man", would have been one of the right person to have led Uganda in the last 34 years.

In other words, instead of the Biraro of this country, we are stuck with a man who is unpatriotic and fiercely unprincipled (dishonest, greedy and fighting only for himself, family and vanity).
Report to administrator