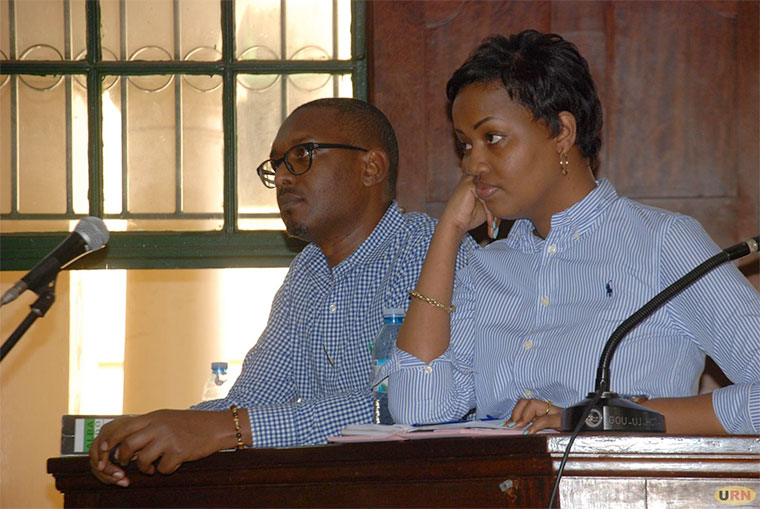 Matthew Kanyamunyu, the prime suspect in the murder of child rights activist Kenneth Akena refused to give his blood samples to detectives to aid in the investigations, court heard today.

Kanyamunyu is jointly charged with his Burundian Girlfriend Cynthia Munangwari for the murder of Akena in 2016. On Wednesday, the prosecution presented their tenth witness, detective constable Haruna Mugisha, a scene of-crime officer attached to Jinja Road police station.

Mugisha told court that he received permission from the commissioner-general of Uganda Prison Services to go to Luzira Upper Prison and get blood samples with the help of a medical officer.

The blood samples were needed to match the DNA on the long-sleeved sky blue shirt and a suit which had been recovered from Munangwari and Kanyamunyu's homes respectively.

It is alleged that Kanyamunyu wore a blue suit on the day of Akena's death. According to Mugisha, when they served Kanyamunyu with the document requiring him to provide his blood samples, he flatly rejected.

Mugisha who has been a scene-of-crime-officer for seven years said that he then went to the Law Development Centre court and secured a court order which he served to Kanyamunyu.

Mugisha told court that Kanyamunyu received and signed the court order but again refused to provide his blood samples. Mugisha further told court that he visited the scene of crime took photographs of Akena's blue car which had been left facing the direction of the city and had scratches on it.

He also took photographs pictures of a long-sleeved Sky Blue Shirt that had been hidden in Munangwari's home in Luzira. However, during cross-examination, one of the three lawyers of Kanyamunyu, counsel Evans Ochieng asked Mugisha if his pictures had the date and place from where they were taken.

The case was adjourned to Thursday.

Does not seem to be making any difference here.
Maybe change scene.
Report to administrator
0 #22 Lysol 2020-02-14 22:04
Quoting ejakait engoraton:

Just asking, has James K morphed into Ian a.k.James K; as they say , if you are not winning an argument or creating an impression, trying changing name.

Does not seem to be making any difference here.
Maybe change scene.

What comments of your own have you ever posted here. instead of just criticising a and playing the attack dog.

May be you should go away or change your username. It doesn't mean I agree with anyone here.
Report to administrator
123