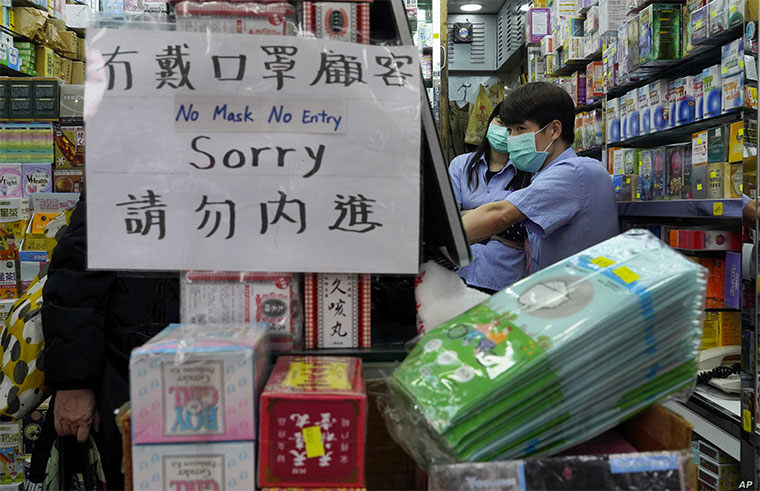 A notice announces no entry to customers without protective face masks at a pharmacy in Hong Kong, Feb. 10, 2020

As the death toll from the new coronavirus outbreak exceeds 1,000 people, the top two health officials in central China's Hubei's province, the epicenter of the outbreak, have been removed from their posts.

The firings come a day after another 103 deaths were reported in Hubei province, where millions remain under lockdown and people are complaining of food shortages.  A total of nearly 43,000 cases across China have been confirmed by the central government.

World Health Organization chief Tedros Adhanom Ghebreyesus said Monday the spread of coronavirus between people who had no history of travel to China could be "the spark that becomes a bigger fire."

"In recent days, we have seen some concerning instances of onward transmission from people with no travel history to China," he said, citing new cases in Britain and France.

The center of the outbreak is China's Hubei province, where millions of people remain under lockdown and complaints of food shortages are rising. China's central bank is making $43 billion available to help businesses involved in fighting the epidemic.

The death toll from the coronavirus is higher than the severe acute respiratory syndrome (SARS) outbreak in 2002-03, which is believed to have killed 774 people and sickened nearly 8,100 in China and Hong Kong.

U.S President Donald Trump said Monday he expects the coronavirus outbreak to disappear in April because of the warmer weather. "The heat, generally speaking, kills this kind of virus," he said.

Health experts say the spread may ease in warm weather when people get out of doors and are not in such close contact with each other. But this is a new strain of coronavirus and some of the experts believe it is too soon to say if spring and summer will kill it off.

Will know when it's all over. One wonders how many Ugandans(in China) who were abounded by the corrupt regime died.
Report to administrator
0 #2 WADADA rogers 2020-02-12 09:03
This is not just a virus, it is an economic war between the giants of the world, many of them were getting jealous with the speed at which China was moving.

These powers which certainly include America have so far achieved their mission, China is bleeding with inflation as their country has been deserted and so are their goods.

The whole of China has diverted its attention to fighting the virus. I think it is the beginning of the end as China will also try to retaliate with a similar measure. In the end, it is Africa that will suffer with diseases and economic pressure as many of the Traders import from China
Report to administrator
0 #3 WADADA rogers 2020-02-12 09:09
These fellows have a tendency of manufacturing diseases in their factories and then go to other countries to spread them, some times they even fail to find the required treatment leaving our people to suffer with diseases like Ebola, nodding disease etc.

The bad thing is that they dont know that we know that they benefit from each disease that they create to the detriment of others.

One day the rest of the world will unite against these super powers, the results will be disastrous. Just like the world has come up to control the use of chemical and or atomic bombs, it is time to go after these fellows who are now using diseases as a warfare.
Report to administrator