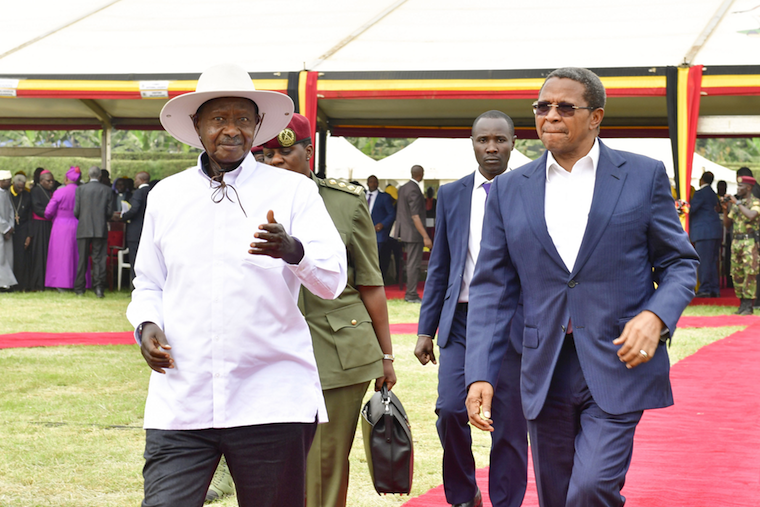 President Museveni has said Ugandans should "stop living this harsh life” and start consuming goods that they consider luxurious yet are necessary for their healthy living.

Speaking at the 34th NRA/NRM Liberation Day anniversary in Ibanda district in western Uganda, Museveni said there have been reports of excess electricity and excess food including sugar, excess milk, as well as industrial products such as cement and steel products which seemingly points to excessive production. However, Museveni said this is not necessarily so because Ugandans are just not consuming enough themselves as they should because of lack of money.

For maize, Museveni said, out of the 5 million tonnes, Ugandans are only consuming 1 million tonnes leaving an excess of 4 million tonnes. Museveni said the ”harsh life” eventually affects the country because it means that the life expectancy of Ugandans is reduced because they lack the necessary nutrients for their healthy living.

Museveni further said, Ugandans keep demanding electricity but even when this electricity is extended to their areas, it will not come free of charge. In order to have money to pay for milk, electricity etc, Museveni said Ugandans ought to find ways of earning and shift from subsistence farming and join the money-making campaign or switch to the ICT, services and industry sectors.

Museveni further retaliated his warnings to corrupt public servants who frustrate foreign investors by asking for bribes, saying they will soon end up prison.

Museveni said these corrupt will be trapped and jailed. He said he’s already talked to the various ambassadors on how to lay traps for the corrupt public servants.

Museveni said investors should ”whisper” to their respective ambassadors and report public servants who delay the necessary paperwork so they can lay a ”trap to capture the thief and send him to Luzira."

Former Tanzania President Jakaya Kikwete who was the guest of honour, said Museveni was and continues to be a mentor to many African leaders and that NRA has helped unify Uganda, create peace and economic transformation.

Their ransacked the Whole Country Stealing Everything 35 Years Down the Road..NO Case to Answer..God..the Almighty iko anapanga..in State House..The 195 Km..Trek Ended ubruptly after Coming Face to Face with Porvety...Ugandans WAKE Up and refuse these Lies..it is Never Too Late..
Report to administrator
0 #12 Wooden K. 2020-01-28 14:42
Only from a pure Kifulukwa can you hear this :

" Kasese Queen has ended her VIST to Kasese"

STUPID !!!
Report to administrator
0 #13 Wainaichi 2020-01-29 03:07
@Odonkara- If you are not fearing Museveni and his supporters as this Wainanchi,fear the power of God Almighty.

Fear the Almighty I say! Threatening the Government and people who are telling the truth and supporting it is sin and against God commands.God said that we shall serve our leaders and follow them.

If you take our the sword you shall be killed by the sword.So may God help us all Piss of muyaye.!!
Report to administrator
12