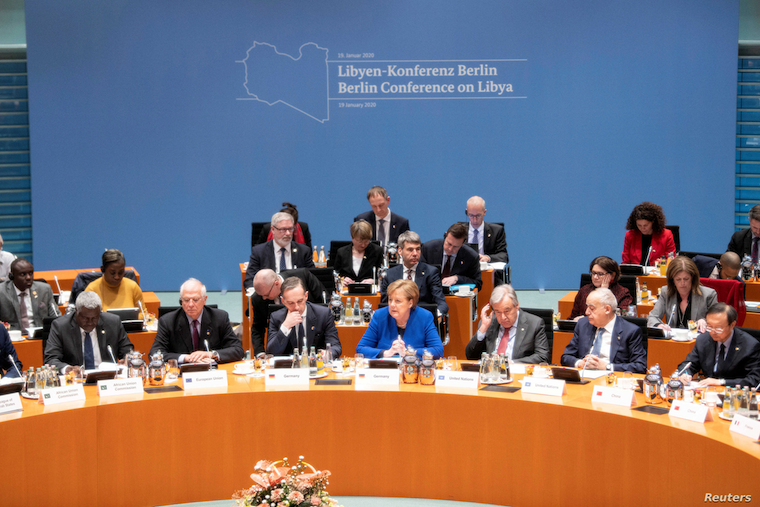 Twelve world leaders have agreed to provide no further military support to warring parties in Libya and to sanction those who violate the arms embargo.

Since the killing of former Libyan ruler Muammar al-Gaddafi on October 20, 2011, the northern African country has been in turmoil ever since, with Libyan militia groups battling the UN-backed government - one in the east headed by former Gen Khalifa Haftar and the UN-backed administration in Tripoli led by Prime Minister Fayez al-Sarraj.

Both warring groups were in Berlin, Germany last week but were not at the January 19 conference that set out to resolve the turmoil. In attendance at the Berlin Conference on Libya at the invitation of German Chancellor Angela Merkel were representatives from the governments of Algeria, China, Egypt, France, Germany, Italy, Russia, Turkey, the Republic of the Congo, United Arab Emirates, the United Kingdom and the United States of America and High Representatives of the United Nations, the African Union, the European Union, and the League of Arab States.

According to the official statement from the conference, the participants reaffirmed their strong commitment to the sovereignty, independence, territorial integrity and national unity of Libya. The participants said only a Libyan-led and Libyan owned political process can end the conflict and bring lasting peace. However, the statement did not indicate any commitment to withdraw existing military support.

The statement said external interferences, institutional divisions, the proliferation of a vast amount of unchecked weapons and the economy of predation continue to be a threat to international peace and security by providing fertile grounds for traffickers, armed groups and terrorist organizations.

This, the statement said, has allowed terror groups like al Qaeda and ISIS to flourish in the Libyan territory and to launch operations in Libya and in neighbouring countries. This has further deteriorated according to the statement the humanitarian situation and facilitated a destabilizing wave of illegal migration in the region.

The 'Berlin Process' committed to supporting the three-point-plan presented by Special Representative of the UN Secretary-General (SRSG) Ghassan Salamé to the United Nations Security Council (UNSC) with the sole objective of assisting the United Nations in unifying the International Community in their support for a peaceful solution to the Libyan crisis. There can be no military solution in Libya.

The representatives at the Berlin Conference further committed to refrain from interfering in the armed conflict or in the internal affairs of Libya and urge all international actors to do the same.

The Berlin Conference also called for the termination of all military movements by, or indirect support of, the conflict parties, in and over the entire territory of Libya, starting from the beginning of the ceasefire process.

The conference also called for the comprehensive process of demobilization and disarmament of armed groups and militias in Libya and the subsequent integration of suitable personnel into civilian, security and military state institutions, on an individual basis and based on a census of armed groups personnel and professional vetting.

EU foreign policy chief Josep Borrell said Monday someone will need to act as a monitor in order for a cease-fire in Libya to work.

"It has, I think, become evident in the last days that there is no chance for a military solution, which could only increase the suffering of the people."

The Berlin Conference also committed to "unequivocally and fully respect and implement the arms embargo established by United Nations Security Council Resolution 1970 (2011) and the Council’s subsequent Resolutions, including the proliferation of arms from Libya, and call on all international actors to do the same."

The conference further called on all actors to refrain from any activities exacerbating the conflict or inconsistent with the UNSC arms embargo or the ceasefire, including the financing of military capabilities or the recruitment of mercenaries.

The Berlin Conference also called for transparent, accountable, fair and equitable distribution of public wealth and resources between different Libyan geographical areas, including through decentralization and support for municipalities, thereby removing a central grievance and cause of recriminations.

The conference also called for the restoration and safeguarding the integrity, security, sovereignty of all Libyan sovereign institutions, in particular, the Central Bank of Libya (CBL), the Libya Investment Authority (LIA), the National Oil Corporation (NOC) and the Audit Bureau (AB). Their boards of directors should be inclusive, representative, and active.

Libyan oversight institutions, particularly the Audit Bureau, Administrative Oversight Authority, the National Anti-Corruption Authority, the Office of the Prosecutor General, and the relevant parliamentary committees as per the Libyan Political Agreement and pertinent Libyan laws are to also be strengthened.

+1 #1 kabayekka 2020-01-27 02:51
Where then are these new breed of African leaders who always believed that African problems are better solved by African peoples.

They should be sending off their nice professional armies to help out their fellow African country.

Surely the dead former Libyan leader was all over this African continent providing his country's oil revenue to many of these countries for economic development.
Report to administrator
0 #2 Odongkara 2020-01-27 21:03
After looting and reducing the country to rubbles and a graveyard then they are, "their strong commitment to the sovereignty, independence, territorial integrity and national unity of Libya.

The participants said only a Libyan-led and Libyan owned political process can end the conflict and bring lasting peace".

And these African demagoues are clueless with their so called African problems requiring African solutions. Gaddafi helped criminals like Leo but they are not helping the Libyans.
Report to administrator