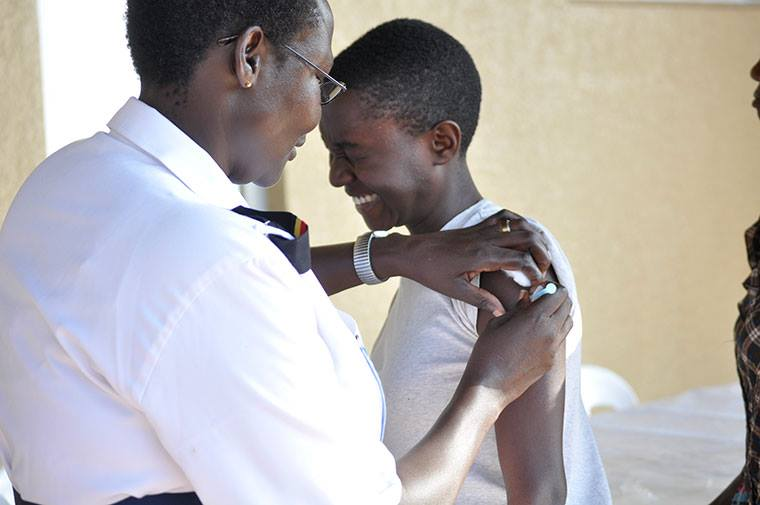 A young girl gets vaccinated against yellow fever recently

Government has declared an outbreak of yellow fever in the districts of  Moyo in northern Uganda and in western Uganda Bullisa. Yellow fever is an acute viral haemorrhagic disease transmitted by infected mosquitoes.

Four cases have so far been reported in the two districts. Two of the cases are believed to be South Sudan nationals while the other two are Ugandan farmers. Three of them have already succumbed to the disease, according to the ministry of Health.

The disease is suspected to have entered Uganda from South Sudan and the Democratic Republic of Congo (DRC) where cases have been reported since 2018.

The first case was a 37-year-old farmer who traded in milk between DRC and Uganda. The farmer is reported to have later passed on in November 2019 and is believed to have spread the disease to his 38-year-old wife who has since tested positive to the disease.

The cases from Moyo are of an 18-year-old and 21-year old male believed to have travelled to DRC before being admitted to Logobo health centre III in Moyo at the beginning of January 2020.

Dr Jane Ruth Aceng, the minister of Health says that the four cases were confirmed after samples taken to the Uganda Virus Research Institute (UVRI) came back positive for the disease. Ministry of Health is carrying out investigations to ascertain the scope of the outbreak and carry out contact tracing before a yellow fever vaccination exercise is conducted in the two affected districts.

The vaccination process will target residents aged 6 months to 45 years in the affected districts. The vaccinated people will get one shot of the vaccine that is enough to protect them for life.

Dr Yonas T Woldermariam, the WHO country representative in Uganda says that the yellow fever vaccine is the most effective way to protect against the disease.

“The vaccine offers protection of up to 100 per cent. There’s no yellow fever cure, the vaccine is the only way to get protection,” he said.

All Ugandans have been advised to sleep under an insecticide-treated mosquito net and to also get vaccinated as preventive measures to keep safe from the disease. On average the cost of the vaccine on the open market is Shs 80,000.

Symptoms of yellow fever include fever, headache, jaundice, muscle pain, nausea, vomiting and fatigue. According to WHO, few people who get infected with the disease develop severe symptoms. Approximately half of those to acquire the symptoms die within 7-10 days of being infected.

This outbreak will be the fourth that Uganda has declared in the recent past after having declared similar outbreaks in 2016 and 2019.

0 #1 WADADA rogers 2020-01-28 10:24
All these diseases are being created by the white capitalists who want to exploit Africans through selling their medicines
Report to administrator