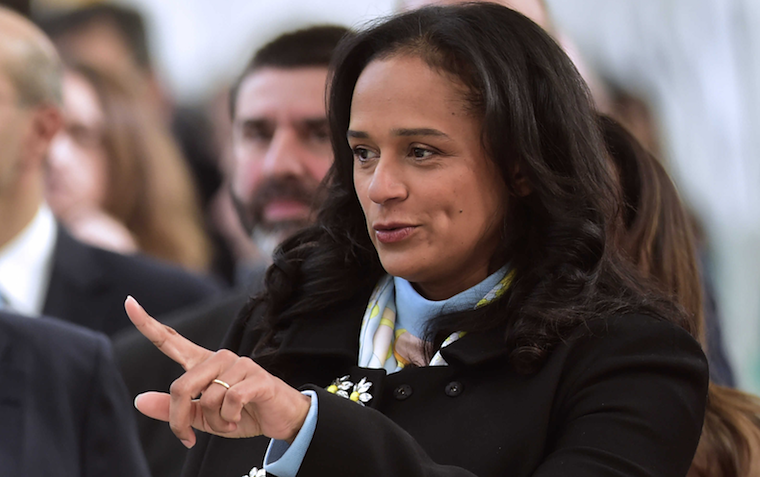 In 1999, Angolan journalist Rafael Marques de Morais wrote an article titled “The Lipstick of Dictatorship” in which he denounced then-President José Eduardo dos Santos as corrupt. For his writing, he was arrested, held in solitary confinement, denied food and charged with defamation.

“I was jailed for that, went on trial for that, and went through hell for exposing corruption at the presidential level,” he told VOA.

Today, as members of the dos Santos family have more than $1 billion in assets frozen and face charges of financial crimes, he feels vindicated. He says his fight to expose corruption was worth it.

“It’s a long-overdue measure by the judicial authorities because Isabel dos Santos and the dos Santos family are at the top of the pyramid of those who have plundered the country,” he said.

A light on dos Santos family

Marques has spent more than two decades chronicling corruption in his home country, with a particular emphasis on the diamond industry.

He has received numerous awards for his work including a Hellman/Hammett grant by Human Rights Watch in 2011. His initiative Maka Angola supports and publishes crusading, investigative journalism in the country.

Marques said throughout his career he has tried to shine a light on the systematic looting of Angola’s wealth by members of the dos Santos family.

In December, a court accused the former president’s daughter, Isabel dos Santos, and her husband of causing the state to incur more than $1 billion in losses through a scheme that involved two state-owned companies transferring foreign currency abroad and never being repaid.

Isabel dos Santos has been referred to as Africa’s richest woman, with ownership interest in a mobile phone company, banks, cable television and a supermarket chain. In 2018, her brother, José Filomeno dos Santos, was arrested and accused of trying to steal $500 million. He is facing a trial before the Supreme court.

Marques said that for years former President dos Santos published decrees announcing the transfer of state assets to his own family and friends.

“The evidence was always there,” he said. “There was in Angola what I called in my thesis ‘the transparency of looting.’ So it was right in the people’s face. It was evident there was not much effort in trying to hide the way President dos Santos was dolling out state resources, state funds, public state bank loans to his own children.”

Will she return to face charges?

Isabel dos Santos and her husband live abroad. Although Angola’s attorney general has demanded that they return to the country to face charges, it is unclear if they will. Marques says he hopes they have their day in court.

“When her father was in power as a dictator, I had seven people coming to arrest me at my house, pointing seven guns at me, and the whole neighbourhood was besieged,” he said.

“I didn’t run away. I didn’t leave the country. I stood up to her father, a dictator, who had the mighty power, and that was in this country. I never fled. Why hasn’t she come back to defend herself?”

+8 #1 Lysol 2020-01-25 01:00
Many Uganda journalists should emanate him and always have courage to expose corruptions and human right abuses in the country.

Journalists should always do investigative work and not just mere do reporting and always be impartial.

And not just posting their mere opinions on issues. There are always many sides of a story. That is why those in the social media jump in, with different views.
Report to administrator
+7 #2 oo 2020-01-25 06:21
Unfortunately in uganda today we no longer have anything close to an investigative journalism of the 1980's to expose the corruption of the top guys.

The last one was Teddy Cheye b4 he was murdered In broad daylight (also the murder covered up and not reported). Everyone today has been silenced into fear or bought off
Report to administrator
+4 #3 Odongkara 2020-01-25 10:33
It's the same story in Uganda because the evidence is always there, ‘the transparency of looting.’

It is right in the people’s face. It doesn't require much effort in trying to hide the way President Museveni is dolling out state resources, state funds, public state to his own family, tribesman and cronies but nobody is doing anything.

The parliament, media, the IGG are just useless cry babies like the rest of the population. There's no serious investigative journalism.

Those who "tried" some form of investigations like the Chris Obore, just got swallowed up by the same monster they investigate and instead of castigating corruption, became a staunch defendant of the monster! I wonder where he is hiding now!
Report to administrator
+2 #4 Akot 2020-01-25 21:11
Quoting oo:

Everyone today has been silenced into fear or bought off

Ugandans have surrendered to be beggers/slaves of Museveni till he drops dead of old age in +30 years?

Yet, just tribal leaders standing down will give Ugandans chance to help from UN/USA/EU & they will have chance to a start without war!
Report to administrator
+2 #5 Akot 2020-01-25 21:21
Lysol, understood, but,

Ugandans have locked themselves with Museveni with the tribalistic system that no developed countries' politicians/journalists will side with!

But once Ugandans bring down the tribalistic system, they won't be alone with Museveni any more!

The future Ugandans want depends on them & them alone but the International Community will be there the moment Ugandans become ONE PEOPLE fighting Museveni in stead of fighting themselves, him buying them off, the poor/uneducated remain silent...!
Report to administrator
0 #6 Lakwena 2020-01-28 17:56
Quoting Lysol:

Many Uganda journalists should emanate him and always have courage to expose corruptions and human right abuses in the country.

Journalists should always do investigative work and not just mere do reporting and always be impartial.

And not just posting their mere opinions on issues. There are always many sides of a story. That is why those in the social media jump in, with different views.

But Lysol, it easy said than done.

In other words, since you can read and write why don't you try just for one day, and see what a piece of cake it is to be an Investigative Journalist.
Report to administrator